Louisiana’s coastal tribes have been left to navigate a complex bureaucracy of parish, state, and federal agencies in a moment of crisis.

This story is in partnership with Houma Courier.

By Carly Berlin and Kezia Setyawan

On a Saturday afternoon in October, Dulac, La. residents drove through the Anchor Foursquare Church parking lot to pick up supplies for Hurricane Ida recovery. At the end of the line, Grand Caillou/Dulac Band of Biloxi-Chitimacha-Choctaw chief Shirell Parfait-Dardar and Loyola University of New Orleans law student Emily Torrey handed out resources, including creative hurricane coping kits for kids and an aid application for residents.

Debris was everywhere: toppled trailers, downed trees, boats sunk in the bayou. Below the intracoastal canal in Terrebonne Parish, 60% or more housing was destroyed by Ida. Many Indigenous residents who reside down the bayou said it looked like a bomb went off.

Parfait-Dardar’s unfinished home was destroyed in the storm; the foundation shifted and the roof and walls blew off. She understood the challenges of applying for aid, so she wanted to spend time checking with tribal members and other residents nearby about navigating Federal Emergency Management Agency (FEMA) aid processes.

The goal was to collect information from residents to use for coordinating volunteer crews—who are coming to help with mucking, gutting, and rebuilding—in lieu of substantial government assistance. “It’s hard. But, I knew what I was getting into. My elders did the same, you know? Resiliency comes from them,” Parfait-Dardar said.

The Grand Caillou/Dulac Band of Biloxi-Chitimacha-Choctaw is a state-recognized tribe, so they don’t have a direct relationship with FEMA. Federally recognized tribes—self-governed, sovereign nations—can request a presidential emergency or major disaster declaration independently from states, apply for public assistance for recovery directly, and access grants for hazard mitigation and disaster preparation projects.

Without federal recognition, many of Louisiana’s coastal tribes are left navigating a complex bureaucracy in a moment of crisis. Tribal leaders said that since Ida—one of the most powerful hurricanes to hit the state in recorded history—they have had to bounce between parish, state and federal agencies in attempts to get crucial recovery resources.

They described issues accessing both major types of FEMA aid: individual assistance for their members, which provides funds to households for rebuilding costs and personal property loss, and public assistance for their tribes, which reimburses larger entities for services including debris removal and infrastructure repair. According to a June 2020 FEMA policy, state-recognized tribes should be treated as local governments, rather than tribal governments with a nation-to-nation relationship with the federal government.

Coastal Louisiana tribal leaders are calling for that to change. “We need direct interaction with FEMA, as community leaders, as tribal leaders,” Parfait-Dardar said. “Because our people and community as a whole are not getting all of the information that they need to be able to do the repairs and do the rebuilding and heal the community, so that we can become contributing parts of society again.”

The long fight for federal recognition

Indigenous peoples in coastal Louisiana have sought federal recognition for their tribes since the 1970s, at first as one larger unit and later separately. The United Houma Nation, the Biloxi, Chitimacha Confederation of Muskogees, and the Pointe-au-Chien Indian Tribe all have active petitions with the U.S. Department of the Interior’s Office of Federal Acknowledgement.

The federal recognition process requires tribes to essentially prove their history—their ancestry and political authority, among other factors—to the U.S. government. They often have to produce written accounts from white historians and anthropologists, themselves involved in the subjugation and erasure of Indigenous communities, if they exist at all. 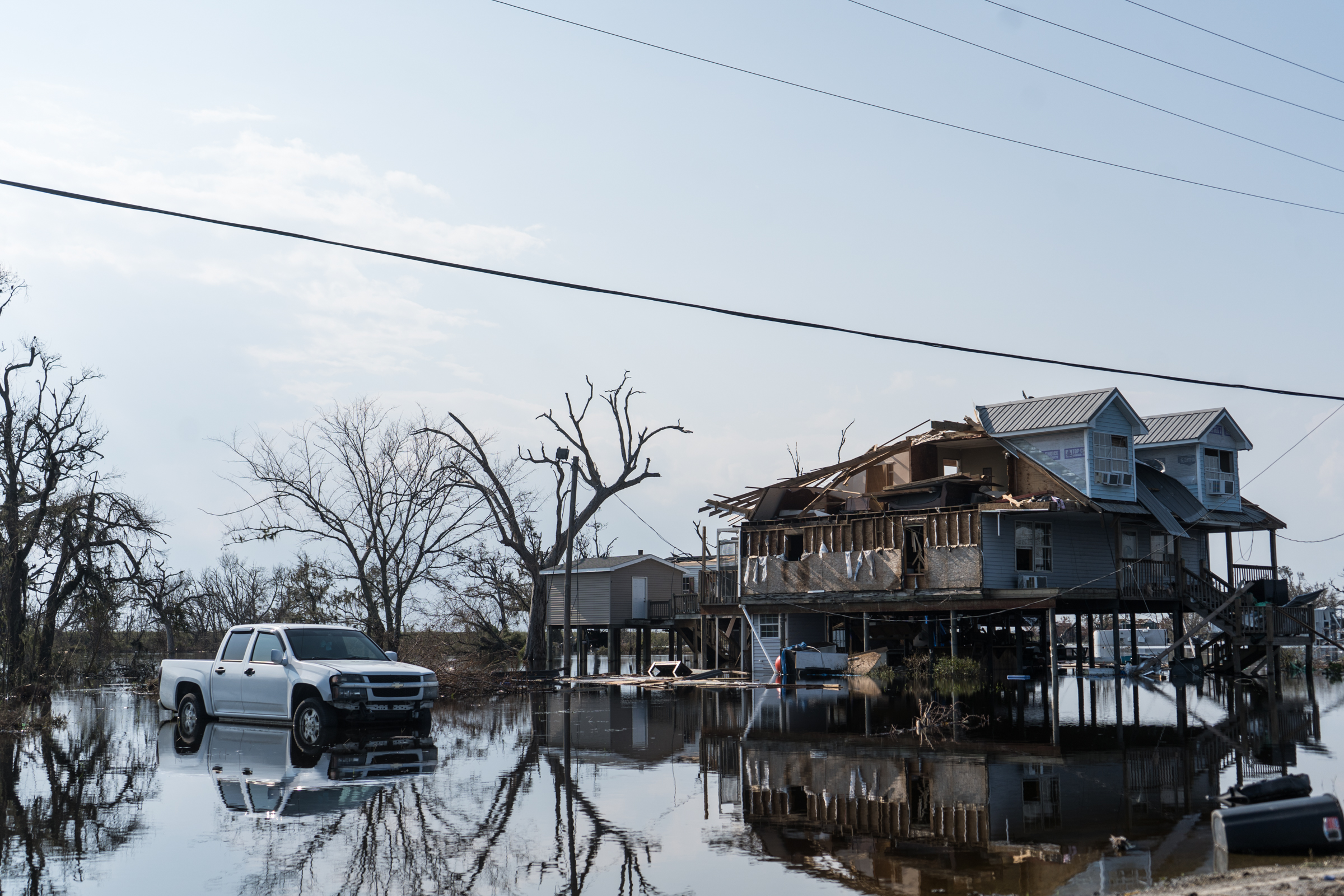 Flooding after Ida in lower Pointe-aux-Chenes on September 4. (Photo by Kezia Setyawan)

“Before 1907 there were no ethnographers or anyone else who had been to the lower parishes of Terrebonne and Lafourche to take any firsthand accounts of native people,” Patty Ferguson-Bohnee, a member of the Pointe-au-Chien Indian Tribe and a law professor at Arizona State University, said at a talk at Tulane University in October.

Storms have also damaged documents important for federal recognition. Kathleen Bergeron, an archivist for and member of the United Houma Nation, said enrollment records were damaged by Ida. The building housing the records had roof and water damage.

Federal recognition would help with land protection, maintaining sacred sites and working directly with federal entities after climate disasters. “Federal recognition is key to basically our continued existence and survival,” Ferguson-Bohnee said at her Tulane talk.

Too much red tape

Many Pointe-au-Chien tribal members said that after Ida, they had to travel to Montegut or Houma, about 45 minutes away from Pointe-aux-Chenes, then wait four to five hours to speak with a FEMA representative about individual assistance.

More than 90 Pointe-au-Chien families’ homes were destroyed, and many were simultaneously dealing with electricity and water outages after the storm. “People still don’t have very good phone service down there,” Ferguson-Bohnee said in October. “And you don’t have any internet service at all.”

There was also a language barrier. Some elders do not speak English and needed to find others to help them access and fill out forms. They would have benefited from having a representative fluent in Indian French to assist them.

Pointe-aux-Chenes is split between Terrebonne and Lafourche parishes. The tribe has had to work with both local entities since Ida, and leaders say local officials are bouncing them back and forth. The tribe has had to submit its list of names multiple times to the state and parish in attempts to get temporary housing from a new state program.

On the Lafourche side of the bayou, many members live on familial properties that aren’t passed down through formal deeds. FEMA recently updated its policies for proving ownership and occupancy—a requirement for receiving aid to rebuild—allowing for additional forms of documentation.

Chief Albert Naquin of the Isle de Jean Charles Band of Biloxi-Chitimacha-Choctaw —which is also not federally recognized—said he is assisting members individually, trying to secure campers with money donated directly to the tribe. He knows that without government assistance, it won’t be enough to help everyone. 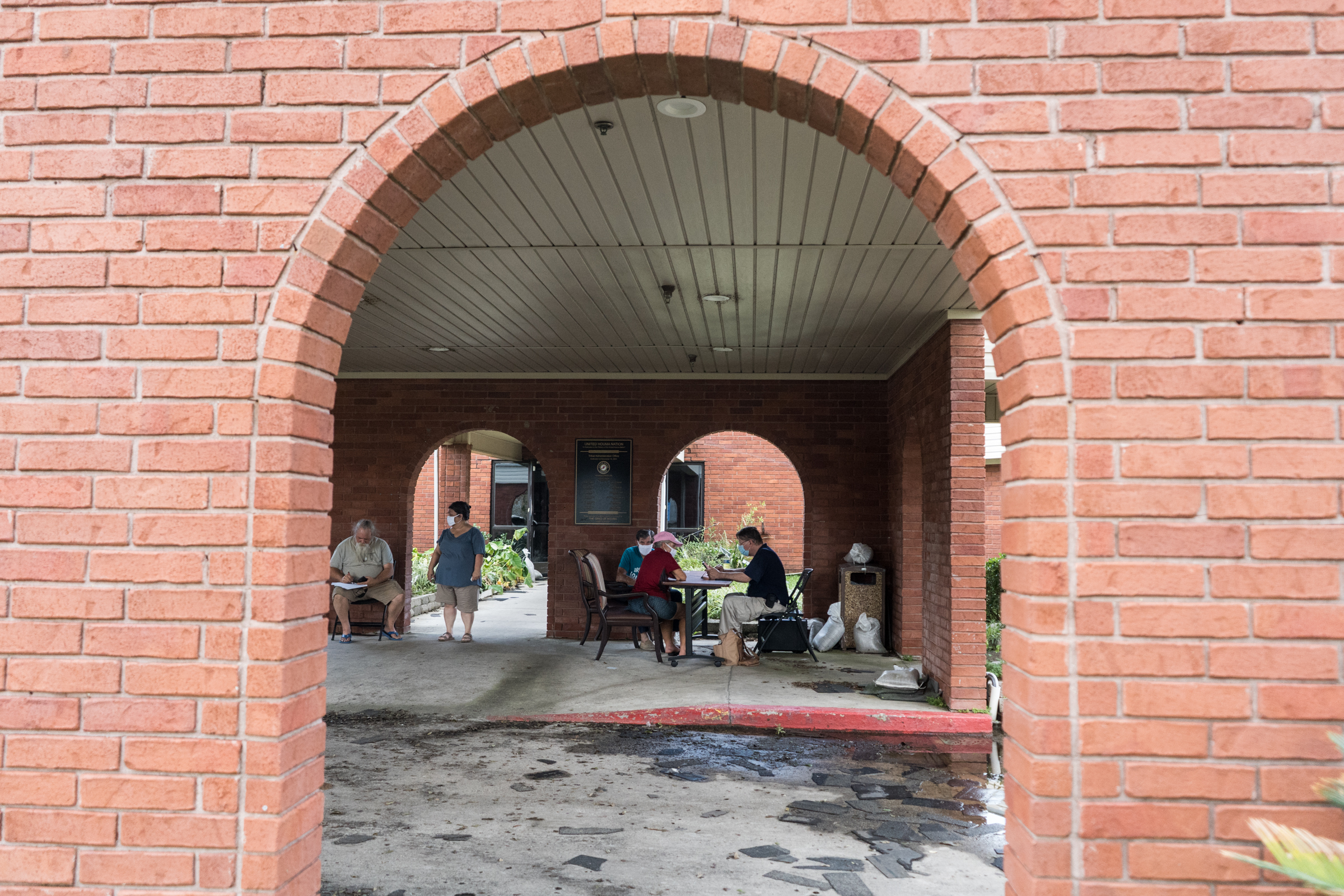 FEMA representatives stationed at the United Houma Nation Tribal Office in Houma to assist tribal members and other residents in the area on September 4. (Photo by Kezia Setyawan)

Public assistance funding has also been an arduous process for state-recognized tribes, and their experiences vary. Ferguson-Bohnee, of the Pointe-au-Chien Indian Tribe, was rerouted to multiple FEMA and state employees when she started seeking assistance for multiple coastal tribes in September.

Ferguson-Bohnee and Parfait-Dardar of Grand Calliou/Dulac have yet to submit public assistance requests for their tribes, but are planning to do so before the deadline on December 28. FEMA spokesperson Debra Young said in an email that FEMA public assistance staff generally only reaches out to entities once they have submitted a request through the state, which then submits them to FEMA.

FEMA employees were stationed at the headquarters of the United Houma Nation—the largest coastal tribe, with 17,000 members within a six-parish area—helping long lines of tribal members and other residents apply for individual assistance for a month following the storm. Bergeron, from the United Houma Nation, worked for FEMA for over a decade doing environmental and historic preservation. She submitted a public assistance request to reimburse the tribe for the costs of restoring its enrollment records, as well as some material costs of rebuilding.

FEMA spokesperson Young said tribes lacking federal recognition must apply for federal disaster assistance through the parish and state, “the same as other municipalities within the disaster area.” Ultimately, she said, “the same FEMA programs and services are available to individual members and the tribal governments of both federally recognized and other tribes under a major disaster declaration.” 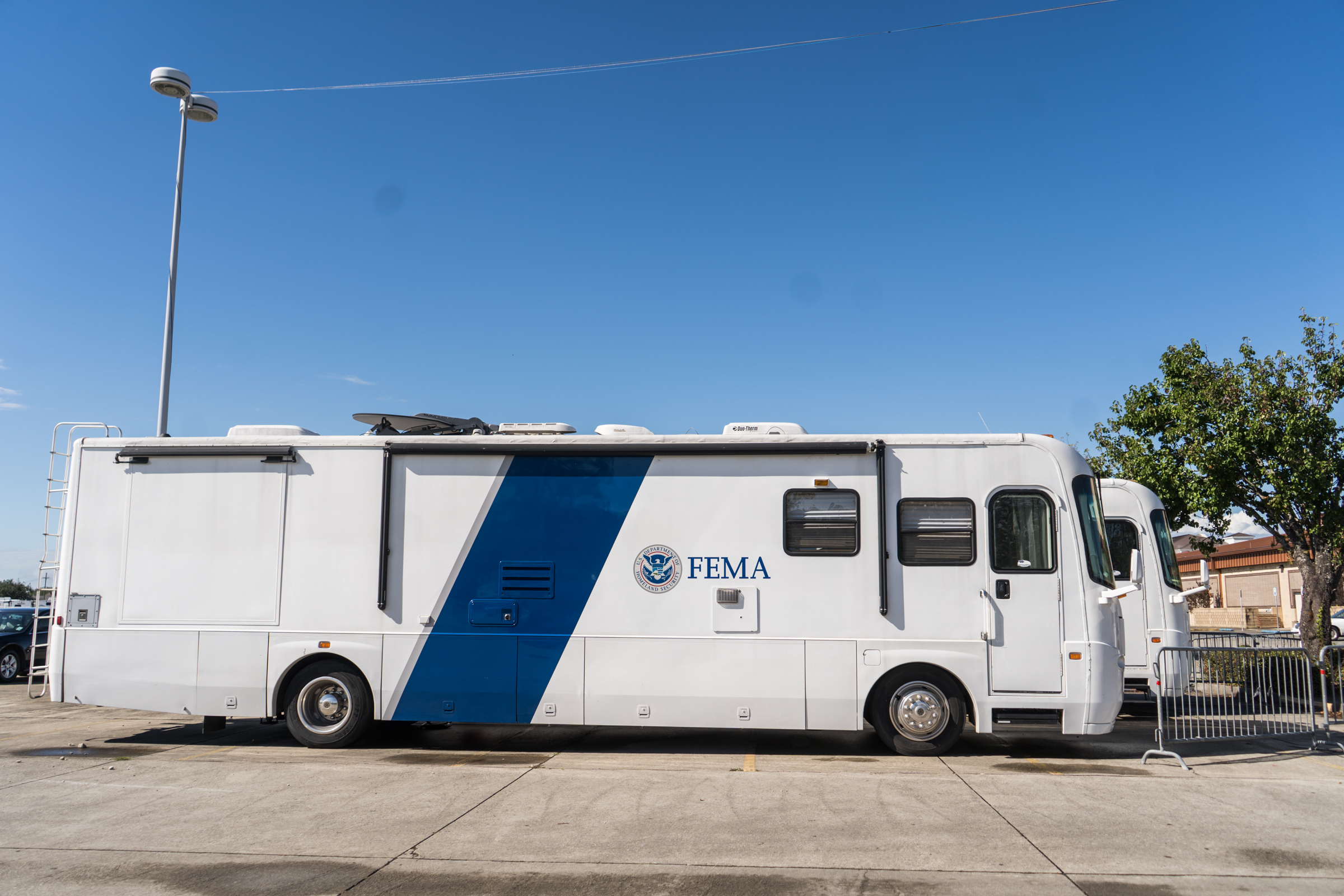 To seek assistance for the United Houma Nation, Bergeron had to submit paperwork to the state via an online portal for the Governor’s Office of Homeland Security and Emergency Preparedness to get it approved and forwarded to FEMA. FEMA approved the request, but classified the tribe as a private nonprofit organization—even though the agency’s policy says state-recognized tribes should be treated as local governments. Private nonprofit organizations must provide significantly more paperwork to prove their aid eligibility.

Bergeron said the tribe has since clarified its classification with FEMA. But the back-and-forth with different agencies has been tiresome.

“As a state-recognized tribe, we have no clout with the federal government,” she said.

“These are complex issues,” Chaunda Mitchell, spokesperson for the Governor’s Office of Indian Affairs, wrote in an email. “We are working diligently with the tribes on a daily basis through a variety of state, federal, and local partners to communicate and assess their needs and provide the necessary support.”

Bergeron is confident the tribe will be able to get the aid, eventually. But reimbursement might not come for months or longer and they’re urgently trying to repair buildings before winter.

Six weeks after the storm, the National Congress of American Indians Annual passed a resolution calling for increased resources for frontline tribes in the wake of Ida, distribution of federal funding directly to all affected tribes, and support of “tribally-led decisions to adapt to the changing circumstances including adaptation, rebuilding, or resettlement.”

Through the resolution, the organization can advocate for policy changes. Ferguson-Bohnee said the move shows that tribes are supportive of each other and could potentially lead to critical investment in disaster and climate change preparation. 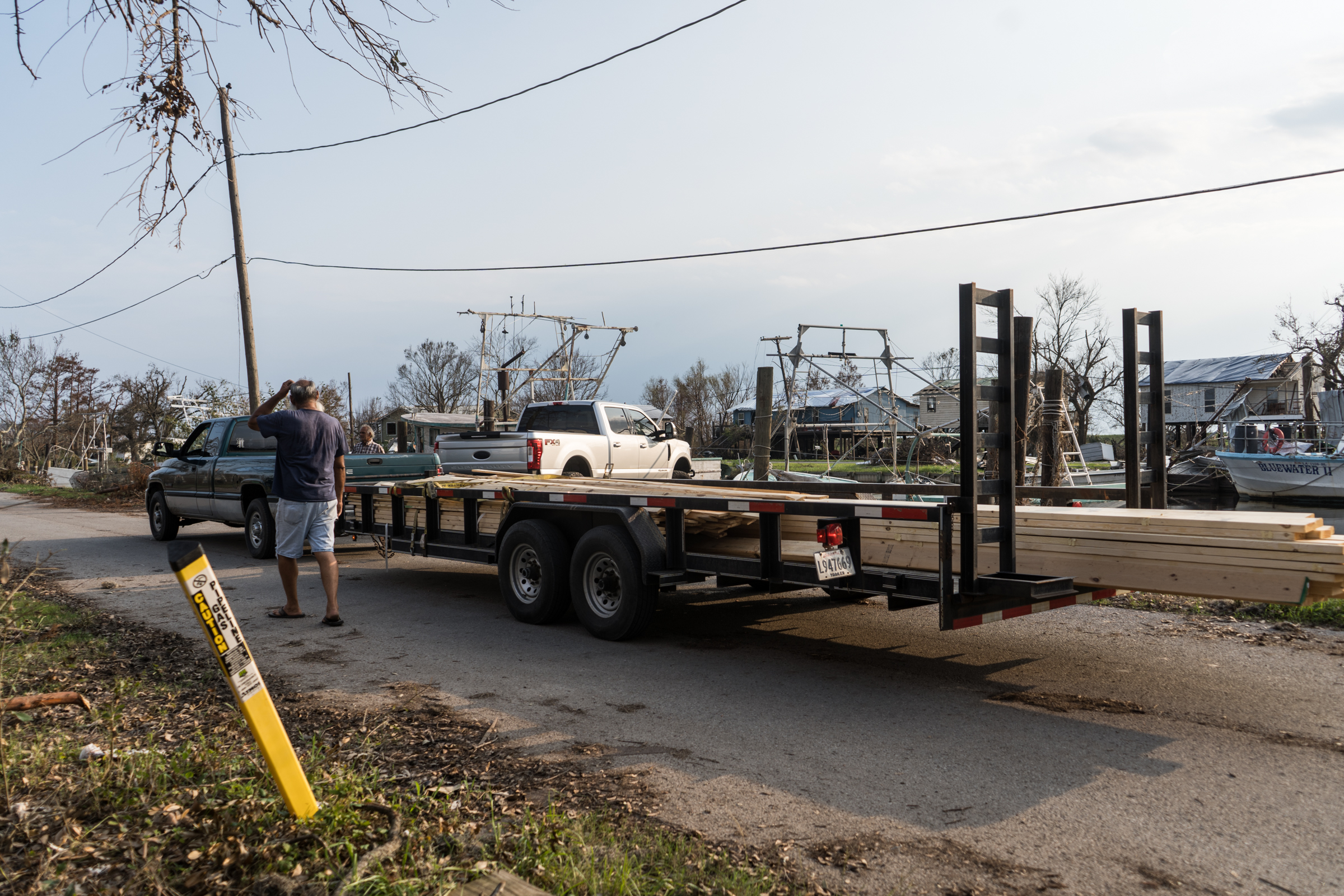 It’s just one part of a long-term vision, several leaders said. “It is an opportunity to use our community, as an example of how to build a resilient coastal community that’s reflective of the tribe, and its way of life that could be replicated by other coastal communities,” Ferguson-Bohnee said.

Parfait-Dardar of Grand Calliou/Dulac said she wanted FEMA assistance locations down in the bayous. Torrey, the Loyola Law student, is helping provide grassroots legal support and working on a project to create more documentation for the tribe to help navigate through future disasters.

“You need to understand how the community functions in order to properly assess them. And you need to know what their risks are. It takes community investment and that really saves in the long run,” Parfait-Dardar said. “And it enables us to be able to assist others better. We should be constantly trying to improve.”

Carly Berlin is Southerly’s Gulf Coast correspondent. Kezia Setyawan is a staff writer at The Courier and The Daily Comet in Houma-Thibodaux.