Hurricanes, a winter storm, and spring floods have left low-income Gulf Coast residents exhausted and cash strapped before this year’s season, with no significant aid in sight.

This story was published in partnership with Texas Observer.

By Amal Ahmed and Carly Berlin

When Chrishelle Palay inherited her great-aunt’s home in Kashmere Gardens, a flood-prone neighborhood in northeast Houston, there was still damage from Hurricane Harvey. Water had seeped into the kitchen and family room floors; the roof was leaky. The house was insured by Allstate, but Palay discovered her aunt’s policy didn’t cover water damage. Then, the company dropped the house, claiming the roof was too old to qualify for coverage.

“We had to find a new policy and company, even though my aunt had been with this company for 15 years,” said Palay, the executive director of the Houston Organizing Movement for Equity Coalition, which helps low-income communities with hurricane recovery. The new policy required a $4,000 upfront fee for flood insurance. “Most families don’t have that [money], especially in my neighborhood,” she said. “They’re left exposed and vulnerable to the environment.”

In Kashmere Gardens and other low-income communities across the Gulf Coast, families are still recovering from past storms—Harvey in 2017, Imelda in 2019, Laura and Delta in 2020, flash flooding this spring. Experts predict 2021’s hurricane season to have several severe hurricanes.

Coastal residents have found themselves perpetually caught between storm preparation and recovery, which are both costly. Prior to hurricane season, emergency managers recommend gathering several days’ worth of food and water and extra necessary medication. People are encouraged to buy storm shutters, generators, and carbon monoxide detectors, often during state tax holidays so the equipment is tax-free. But these items still aren’t cheap—and for some low-income households, they are unaffordable luxuries.

There are almost no federal or state funding programs to address this need, partially because it’s impossible to predict where a hurricane will hit several months out. Government funding from agencies like the Federal Emergency Management Agency (FEMA) are generally reactive, flowing to states, counties, and municipalities after damage is done. That means the burden of preparation—and often, a lengthy list of expenses—falls on individual households.

Advocacy groups are trying to support communities: Houston nonprofit West Street Recovery buys items for go-bags and distributes them in low-income communities. The kits, assembled in a waterproof backpack, include essentials like matches, flashlights, gloves, personal hygiene and menstrual products, first aid kits, water, plastic document envelopes, basic tools, and non-perishable food. Each kit costs about $95—an expense those living paycheck to paycheck might not be able to afford even if it could save their lives in an emergency, said Ben Hirsch, the organization’s director of partnerships.

Some areas are trying to prepare while rebuilding from last year’s storms. Southwest Louisiana was hit by two hurricanes in 2020; many homes are still covered in tarps and people are living in tents and trailers. “Normally, we tell people: have $300 to $500 available, prepare three to five days worth of clothes, of non-perishable food,”said Roishetta Ozane, co-founder of the Vessel Project, a mutual aid effort in Lake Charles. “But then you had Laura hit, and we were away from home for a month. And then here comes Delta right behind it, and we’re out for another couple of weeks.”

The Jones family outside their hotel in New Orleans after Hurricane Laura hit their home in Lake Charles. From left to right: Josiah Jones, Elizabeth Jones, Joyce Singleton, and Wendell Jones. Photo by Carly Berlin

By the time some returned home, the winter freeze came, cutting off water for days. Historic flooding in May set rebuilding back further, so the Vessel Project gave away supplies including gloves, mops, buckets, mold spray, and loaned dehumidifiers to mitigate water damage.

For many, “everything they didn’t lose in those disasters, they’ve lost now,” Ozane said. She doesn’t expect the average southwest Louisiana resident to be able to adequately prepare for this year’s hurricane season. “People are wiped out,” she said. “Their savings is wiped out.”

Hurricanes, particularly rapidly intensifying ones like Laura and Harvey, can leave households with just a few days to find the money for extra food, water, and supplies, or to prepare for a mandatory evacuation, said David Bierling, a researcher at A&M’s Texas Transportation Institute and Hazard Reduction and Recovery Center. “It takes time to get ready, and that preparation needs to be done before a storm makes landfall.”

Staying in place is often more affordable than leaving. “Evacuations are probably the most well-known individual action that people can take in a hurricane,” said Carlee Purdum, a researcher at the Hazard Reduction and Recovery Center at Texas A&M. “But it’s expensive. People leave and they don’t know when they’re coming back.”

Not having a credit card is an additional obstacle, Purdum said. The Federal Reserve estimates that 40 percent of Americans can’t cover a $400 emergency expense in cash. Bierling said their research shows that during Harvey, Coastal Bend households that evacuated to nearby friends’ or family spent about $1,200 on average, including lost wages, food, and transportation costs. Those who had to stay in hotels incurred even more.

In 2005, the number of deaths  among people who did not evacuate before Hurricane Katrina was so high it prompted researchers and government officials to study why people stayed, according to Alessandra Jerolleman, a research associate at Jacksonville State University’s Center for Disaster and Community Resilience. “A lot of the research there showed that certainly there were just some very basic barriers to access,” she said. “Not everybody had cars. It was the end of the month; not everybody had gas money. Many folks who worked hourly type jobs were concerned about not being able to get back in time to keep those jobs.” 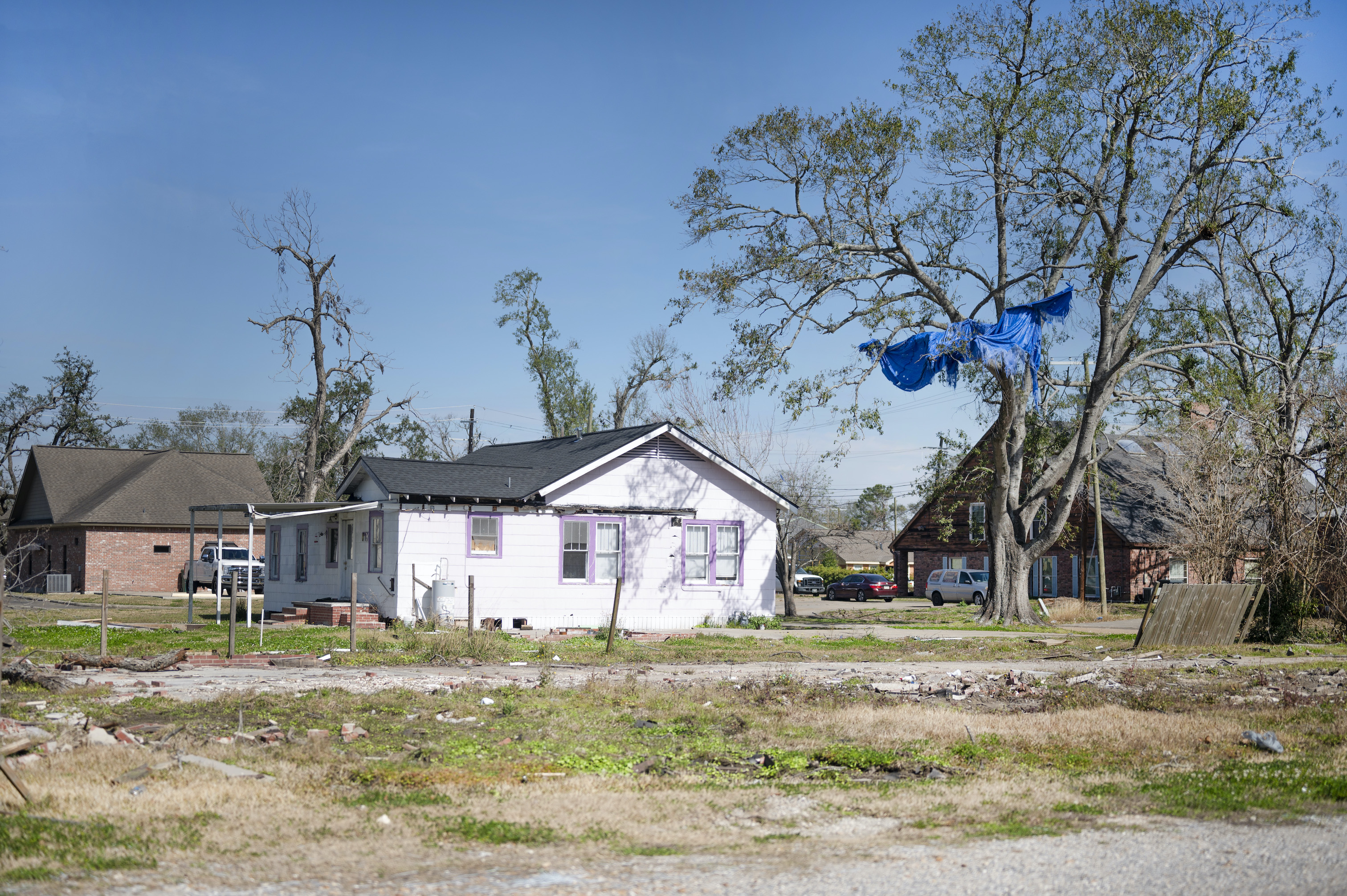 According to a 2010 study from the Gulf Coast Research Center for Evacuation and Transportation Resiliency, 100,000 residents remained in the city for Katrina—more than 20 percent of New Orleans’ population at the time—because many lacked private vehicles or otherwise opted to stay when the evacuation order was given only 24 hours before landfall, compared to the typical 48 hours. Katrina was responsible for the deaths of 1,170 people in Louisiana, and the risk of death increased with age, according to an analysis by the Louisiana Department of Health, though that number has historically been difficult to pin down.

The City of New Orleans developed an evacuation assistance program aimed at providing transportation for residents who would not be able to evacuate otherwise, and other Louisiana parishes have developed similar programs. But when an evacuee boards a bus out of town, they don’t necessarily know where they are being taken.

Ozane, from the Vessel Project, said Hurricane Laura evacuees expressed frustration last year when Louisiana emergency agencies rolled out a non-congregate shelter program for the first time, to allow for social distancing during the pandemic. Evacuees were dispersed to hotels across Louisiana and Texas; those driving personal vehicles were told to travel long distances to register at mega-shelters before being approved for hotel rooms.

“You had community members who were told to go here, to go there,” Ozane said. “They were given the runaround.”

This made accessing basic resources a challenge. Some hotels didn’t provide basic amenities, like refrigerators or cleaning services, which Jerolleman chalked up to the last-minute contracts between hotels and governmental agencies. “It’s a little easier to sort of be out of sight, out of mind,” she added.

These non-congregate shelters, coordinated by state agencies and the Red Cross, were free for evacuees. For evacuees who opt to pay their own way, homeowners and renters insurance may help cover costs during a mandatory evacuation or if a home is severely damaged, said Loretta Worters, a spokesperson for the Insurance Information Institute, which provides data-driven insurance insights to consumers. Most policies cover “additional living expenses” or “loss of use” after a hurricane, intended to cover a portion of “hotel bills, restaurant meals, and other costs that are over and above your usual living expenses,” she said.

However, additional living expenses are typically time-bound or are tied to the value of a home, and usually kick in only during a mandatory evacuation or if a home is deemed “uninhabitable,” though policies differ across companies. Many southwest Louisiana residents say their insurance companies have withheld a variety of recovery payments after Hurricanes Laura and Delta “through a combination of slow responses, repeated delays, and blatantly low settlements,” the Advocate reported last month.

FEMA’s Individuals and Households Program is intended to fill in the gaps, aiding those “who have uninsured or underinsured necessary expenses and serious needs” following a disaster, according to the agency’s website. But FEMA aid has lagged in southwest Louisiana, pushing some renters into homelessness, as Southerly reported in February. According to a recent report from the New York Times, FEMA aid often favors white applicants over people of color, even when the amount of damage is comparable.

Nonprofits typically receive a fraction of the grant money needed for storm preparation, said Hirsch, from West Street Recovery. “Disaster preparation is not just tweeting out an infographic about how to read the weather.”

While educating Houstonians about the importance of building a survival kit is important, at some point the obstacle for most people becomes money and access, he said—not a lack of awareness. Until major infrastructure projects are funded, built, or improved with climate change in mind, coastal residents will be caught in this cycle.

But that requires massive federal and state spending on projects across the coast. For instance, the Texas legislature recently passed a bill to fund a portion of the $26 billion Ike Dike, a coastal barrier system in the Houston-Galveston region. In Northeast Houston, it’s almost a given that neighborhoods will flood in a major storm; flood infrastructure still hasn’t been updated despite the county’s promises of funding two years ago.

West Street Recovery has been repairing homes damaged by Harvey and Imelda with the next storm in mind. One resident’s house in Northeast Houston took in about six inches of flood water last month during heavy rains. But because West Street had replaced all the carpet in her house with tile, and installed baseboards that were nearly a foot high so that the drywall was higher up than potential flooding, there was minimal damage. It took days, rather than weeks, to clean out the house.

Even this more resilient design is a temporary solution. Floods are still both physically and mentally stressful for homeowners who know they’re just going to keep flooding year after year, Hirsch said.

“The whole idea of disaster ‘recovery’ is nonsense in our communities,” Hirsch said. “People are living in a perpetual disaster of disinvestment and racism and environmental injustice. Let’s not kid ourselves: West Street Recovery cannot build a drainage basin. We can put in a tile floor, but we can’t prevent people from flooding. Only the government can do that, and they need to do that.”