Local officials are working to inform the public while still recovering from 2020’s record-breaking season—all on tight budgets.

Two weeks before the start of the Atlantic hurricane season, Lake Charles, La. was hit by one of the worst flooding events in its history. On May 17, up to 15 inches of rain fell in a matter of hours. Roads suddenly became rivers, stranding people in their cars.

The city is still reeling from last year’s back-to-back hurricanes and a severe winter storm in February. “I think it’s fair to say that just about everyone who lives in southwest Louisiana, maybe even southeast Texas, are experiencing some sort of hurricane fatigue,” said Dick Gremillion, director of homeland security and emergency preparedness for Calcasieu Parish, where Lake Charles is located.

Gremillion is still waiting on replacement windows for his home. “You still see a lot of blue roofs,” he said. “Then, when you have a catastrophic rainfall event, it just exacerbates the damage that much more.”

Zachary Hood, emergency management director for Baldwin County, Al., only recently moved back into his home after Hurricane Sally hit coastal Alabama and northwest Florida in September. Doing his job while displaced was a major challenge, as was finding a place to live in the rapidly growing county. “It was very difficult for us to find a temporary, affordable option while we rebuilt our home,” Hood said.

With June 1—the official start of hurricane season—quickly approaching, Hood’s office is busy coordinating emergency plans with other local agencies and educating the public about hurricane preparation and evacuation planning through social media campaigns and in-person community outreach. His office has just eight staff members, which he said is larger than many county governments’ emergency management departments.

Last year, Sally took an erratic path, making evacuation planning difficult. Many residents underestimated the severity of the Category 2 hurricane; it dumped nearly 30 inches of rain in some coastal areas.

“We pulled our triggers a little late for evacuation orders,” said Eric Gilmore, emergency manager for Escambia County, Fl., which was also hit hard by Sally. Gilmore said his office plans to “lean forward a little further” this year, issuing warnings earlier and using “stronger wording” so residents don’t get complacent and “we still have time to get people out of harm’s way.”

The lack of affordable, stable housing is a major problem across the coast, leaving people vulnerable. “We still have some people living out of campers on their property,” Gilmore said. Some areas still have dead trees, which could be dangerous with gale-force winds.

Now is the time for residents to assess their rebuilding progress and their flooding risk, he added. “We’re asking them to evaluate where they are in their process.”

Hood emphasized the need to nail down evacuation plans as soon as possible and to build a kit with necessities like medications, identification cards, and non-perishable foods. If people decide to shelter in place, they should be prepared to self-sustain “for five to seven days,” said Gilmore.

Gremillion is concerned that fatigue might keep Calcasieu Parish residents from evacuating. “People know what they should do,” he said. “The question is, will they have the energy to do it when the time comes?”

He’s urging parish officials to build extra time into their public messaging ahead of an emergency. “We’re thinking that we need to advise people a day in advance of where we would normally be, just to give them extra time to think about what they’re going to do,” he said.

Emergency shelters are a last resort. Last year, emergency managers had to ensure sheltering operations allowed for social distancing. Some opted to use hotels, while others set up cots with extra spacing in traditional congregate shelters. In Escambia County, space is still limited because of COVID-19 safety measures. “Our shelter capacity is still cut to a third,” Gilmore said. He suspects more people may seek shelter in the event of a hurricane this year; some people who stayed in their homes last year have told him they wouldn’t do it again.

Hood said residents in his area are paying closer attention. “As an emergency manager in a county that was heavily impacted by many disasters just within one year’s time, the fact that we feel like we finally have the public’s ear and were helpful in a sense on how they prepare is the game changer here,” he said. 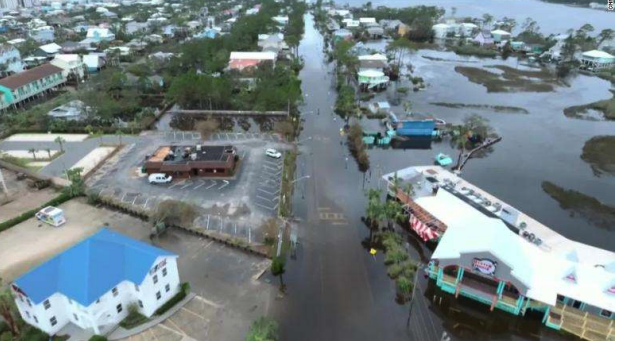 Flooding in Gulf Shores after Hurricane Sally in 2020. Photo by Alabama Forestry Commission

Attention is important—but emergency management agencies need resources to do their preparedness and recovery work. The most pressing issue for Hood is securing federal funding. Baldwin County and municipalities fronted millions of dollars to clean up debris after Sally, with the expectation that the Federal Emergency Management Agency (FEMA) would reimburse them for 75% of the cost—the typical cost-share between the agency and local governments for debris removal. According to a Baldwin County press release from April, FEMA reimbursements for Hurricane Sally clean-up due back to the county and municipalities totaled to about $200 million. FEMA has since paid back a fraction of those costs, and the state has reportedly agreed to cover half of the county’s share. FEMA has yet to reimburse Escambia County money for debris-clean up as well, according to Gilmore.

“Right now, our most critical objective is we’ve got to get money back to the county so that we can burden the cost of clean-up this hurricane season,” Hood said.

FEMA spokesperson Ron Roth said the process can be tedious: It requires local governments to provide extensive documentation to prove that expenses are eligible for reimbursement. “The sooner they can have good, clean documentation that we can work with,” he said, “the sooner we can process those requests and get that money back in their coffers.”

But he noted that local governments are in “a precarious position,” being low on funds and prepping for potential storms.

A large portion of FEMA’s operations were virtual last year due to the pandemic. Without as much in-person interaction, “you don’t get to build a relationship with them like you would have if they were here,” Hood said. “That disaster becomes personal to them too, because they’re here and they’re seeing the challenges.”

According to the Baldwin County press release, FEMA recently sent representatives to the county to aid in the federal reimbursement process, which had “been delayed due to several factors.” Roth, who just spent three weeks in Alabama, agrees “that it is tougher to build a relationship in a virtual environment.” He said FEMA has weekly meetings with reimbursement applicants. “We’re diligently looking for ways to keep the money flowing,” he said.

For months, state, parish, and city officials have asked the federal government for additional disaster relief funding to aid southwest Louisiana. Many residents say that individual assistance from FEMA has lagged; for some, the lack of funding has pushed them into homelessness. When President Joe Biden visited Lake Charles in early May, officials pressed him further, and then renewed those calls after the recent flooding.

Read more: Our series on hurricane recovery in southwest Louisiana

Since August 2020, Gulf Coast correspondent Carly Berlin has been reporting on the toll Hurricanes Laura and Delta have taken.

“There is a finite amount of financial capital in this community, there is a finite amount of human ability in this community … the words unprecedented, historic, unthinkable, unfathomable, they just don’t seem to properly articulate what we are going through anymore,” Lake Charles Mayor Nic Hunter said at a press conference after the flood. “We absolutely deserve and need the proper and commensurate response to what we have gone through. We have not received it yet.”

The National Oceanic and Atmospheric Administration is predicting another active hurricane season this year, though experts don’t anticipate it to beat 2020’s records. Gremillion’s priority is to put out clear communications about the risks.

He hopes to effectively articulate the impacts of a potential storm: “If people have the correct information,” he said, “they can make a good decision.”