The history of the South’s prison labor programs 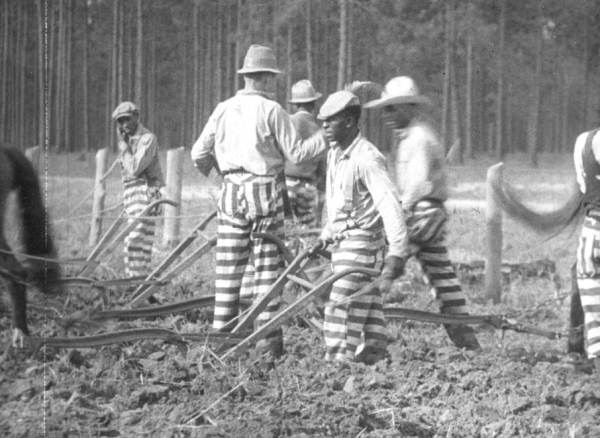 Universities are facing mounting pressure to stop using the unpaid labor of incarcerated people — and some, like University of Florida and University of Georgia, have done so. Will others be more transparent and follow their lead?

This is the first in a four-part series, published in collaboration with The Marjorie.

In mid-June, the University of Florida released a statement detailing actions they planned to implement in an effort to “become part of positive change against racism.” The president said they would remove campus monuments celebrating the Confederacy and — in a move that received ample attention and controversy — promised to end the “Gator Bait” chant at football games due to its reference to the Jim Crow-era history of Black people being used to bait alligators for both hunting and entertainment.

One of the most significant items on the list was that the university vowed to stop the use of prison and jail labor in its agricultural operations by ending contracts with the Florida Department of Corrections and other correctional facilities, including county jails, by July 2021.

“There are agriculture operations where UF has relied on prison and jail inmates to provide farm labor,” stated UF president Kent Fuchs. “The symbolism of inmate labor is incompatible with our university and its principles and therefore this practice will end.” 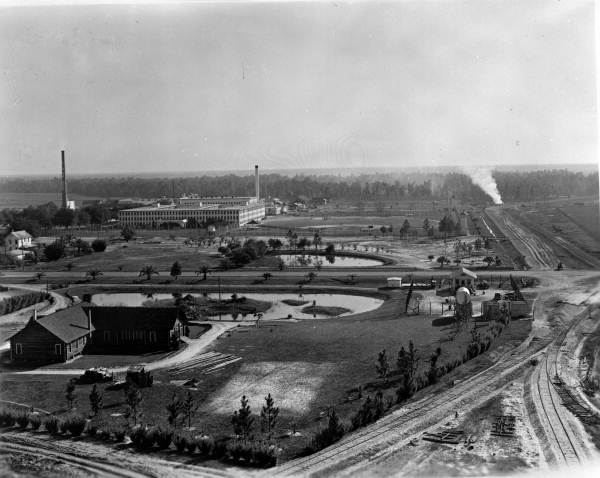 But in September, amid further pressure from student activist groups, the University of Florida Institute of Food and Agricultural Sciences (IFAS) ended the contracts early by “reallocating funds from other programs” to hire replacement workers, said Jeanna Mastrodicasa, IFAS associate vice president for operations.

For at least a decade, UF had about 100 incarcerated people at any given time planting and harvesting crops in fields and greenhouses, working with livestock, and operating machinery at their IFAS research and education centers across the state. Incarcerated laborers received no pay, but could earn gain-time, or days off of their sentence, according to the Florida Department of Corrections (FDC) and Florida law. According to some contracts, however, the university did pay FDC $2 an hour per incarcerated person. In other contracts, there was “no financial obligation,” between the university and the FDC.

The university previously touted the rehabilitative nature of the voluntary program available to people incarcerated in at least 10 state prisons and county jails, and emphasized the program’s importance to agricultural research in the state. It was also critical for their bottom line: Prison labor used at the nine IFAS research farms was valued at $1,690,500 per year, according to the university.

Despite its purported benefits, the university did not collect data on the employment or recidivism outcomes of the incarcerated people who participated in the program. FDC did not provide data on post-incarceration outcomes by the time of publication. Without this information, there are many unanswered questions: What happened to people after they finished working at the agricultural research centers? Did they find jobs? Did they go on to work in agriculture? Did they return to jail or prison?

In the midst of worldwide protests this summer following the killings of George Floyd, Breonna Taylor, and other Black Americans by police, UF walked back its praise for the prison labor program. In prisons and jails across the U.S., Black men are disproportionately incarcerated. Despite being only 12% of the general U.S. population, they accounted for 35% of the total male prison population in 2018, according to the U.S. Bureau of Justice Statistics. That number is higher in the majority of Southern states: In Florida, it’s nearly 48%. While some work programs have been shown to improve recidivism rates, research shows white incarcerated people receive better jobs, skills training, pay, and working conditions than Black people. FDC did not provide racial data by the time of publication for incarcerated people who participated in the program.

UF administrators would not explicitly say why the decision was made to end the contracts. “That’s a good question. I don’t have the answer because I wasn’t involved in the decision,” Mastrodicasa said. “My job is simply to implement policy.”

Both Fuchs and assistant vice president of communications Steve Orlando declined to comment. They referred The Marjorie and Southerly to the June press release.

“We saw inmates’ work on our research farms as a way they could contribute to furthering agricultural research for the benefit of all stakeholders while gaining training and new skills,” said Jack Payne, the recently retired UF senior vice president for agriculture and natural resources at IFAS. “However, the symbolism of inmate labor doesn’t align with that goal. We will consider how we can continue to offer educational opportunities to inmates in the future.”

The economic benefits for the state, universities, and correctional institutions are significant. University and prison officials emphasized that these programs provided rehabilitation through skill building and work experience, and supplied detailed information about the cost savings their institutions receive. The termination of contracts between universities and prisons and jails will result in significant cost increases, they said.

This year, some other Southern universities have followed suit in pausing their prison labor programs during the COVID-19 pandemic or ending them altogether, but it remains to be seen how universities will replace those jobs — or at least  become more transparent about their use of incarcerated labor.

The South has a long and violent history of using incarcerated labor, from convict leasing in the 1800s to chain gangs in the 1900s. After the emancipation of enslaved people, many Southern state governments leased out their prison populations to private corporations and businessmen.

“They worked in brickyards and sawmills and plantations and the like throughout the South,” said Matthew Mancini, author of One Dies, Get Another: Convict Leasing in the American South, 1866-1928. Other common jobs included railroad construction and agricultural labor.

Between 1900 and 1930, many plantations were converted to prisons, said Stian Rice, a food systems geographer and visiting assistant research scientist at the University of Maryland, Baltimore County who studies the history of prison labor in agriculture. For instance, Angola Prison in Louisiana, which the state bought as an 8,000-acre plantation, turned former quarters for enslaved people into prison cells. Incarcerated people tilled the land and harvested crops as white guards watched over them. Angola still uses farm labor on-site and is the largest maximum security prison in the U.S., covering over 18,000 acres and housing nearly 5,000 incarcerated people — the vast majority of whom are Black. 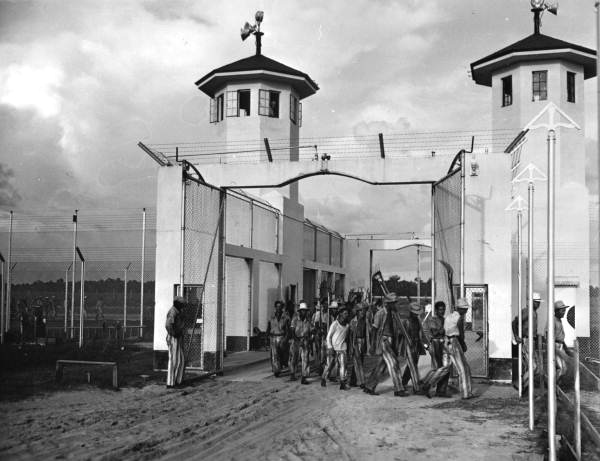 Agricultural labor is still common among Southern prisons. The food incarcerated people grow on site is used by the prison or, in some cases, supplied to other state facilities. Some states, like Louisiana, allow crops to be sold on the open market. Other states allow prisons to lease out incarcerated people to private farms.

Vivien Miller, associate professor of American history at the University of Nottingham and author of Hard Labor, Hard Time: Florida’s “Sunshine Prison” and Chain Gangs, said prison labor programs today are different, but follow this long legacy in the South. “It’s certainly a descendant of slavery, and the ripple effects of it continue on through to the present day in the way that we think about what an inmate looks like and the acceptance that prisons should be harsh, custodial, and exploitative places,” she said.

In 1930, Congress passed legislation requiring the federal government “to provide employment for all physically fit inmates.” The legislation prohibited the public or private sale of prison-made goods. But in 1934, the Federal Prison Industry was established as a government-owned corporation organizing prison labor programs and selling prison-made products under the name UNICOR. Prison labor laws were updated in 1979 under the Prison Industry Enhancement Certification Program, a federal program that oversees correctional facilities’ partnerships with private industry.

Most incarcerated people work inside prisons. According to a 2017 Prison Policy Initiative report, the high end average of seven Southern state prison systems that pay workers for on-site labor is 54 cents an hour. But there are also state-run correctional industries, which use incarcerated labor to build goods such as dorm furniture or license plates that are sold to state agencies, nonprofits, or county and local governments. Those working for correctional industries make an average of 86 cents an hour, according to PPI. (Arkansas, Georgia, and Texas don’t pay anything, according to the data.) That extremely low wage has to cover many costs incarcerated people have to pay for medical expenses, supplies, food, phone calls, and court fees.

The vast majority of jobs are determined by state, federal, and private prisons, or county jails — and there is no central regulating body to determine wages, types of work, or working conditions. That’s allowed Southern states to enjoy the economic benefits of prison labor — particularly for agricultural work, Rice said.

“The growing period is significantly longer, and the demand over the calendar year is nearly continuous — something that you don’t see in other places with a migrant labor population,” he said. “You have the effect of free labor from the state, and you are essentially keeping the wage rate for non-prisoners artificially suppressed.”

“Essentially what it is doing is allowing the university to not pay an agricultural worker pool — that’s obviously financially in the interest of the university,” he said. The relationship — a state university contracting with an institution like a county jail or state prison — exists much more easily than contracting out with a private grower or competing with trained agricultural workers, which could charge much more for labor. For instance, IFAS bases the valuation of their cost savings on $14 per hour for the same labor. 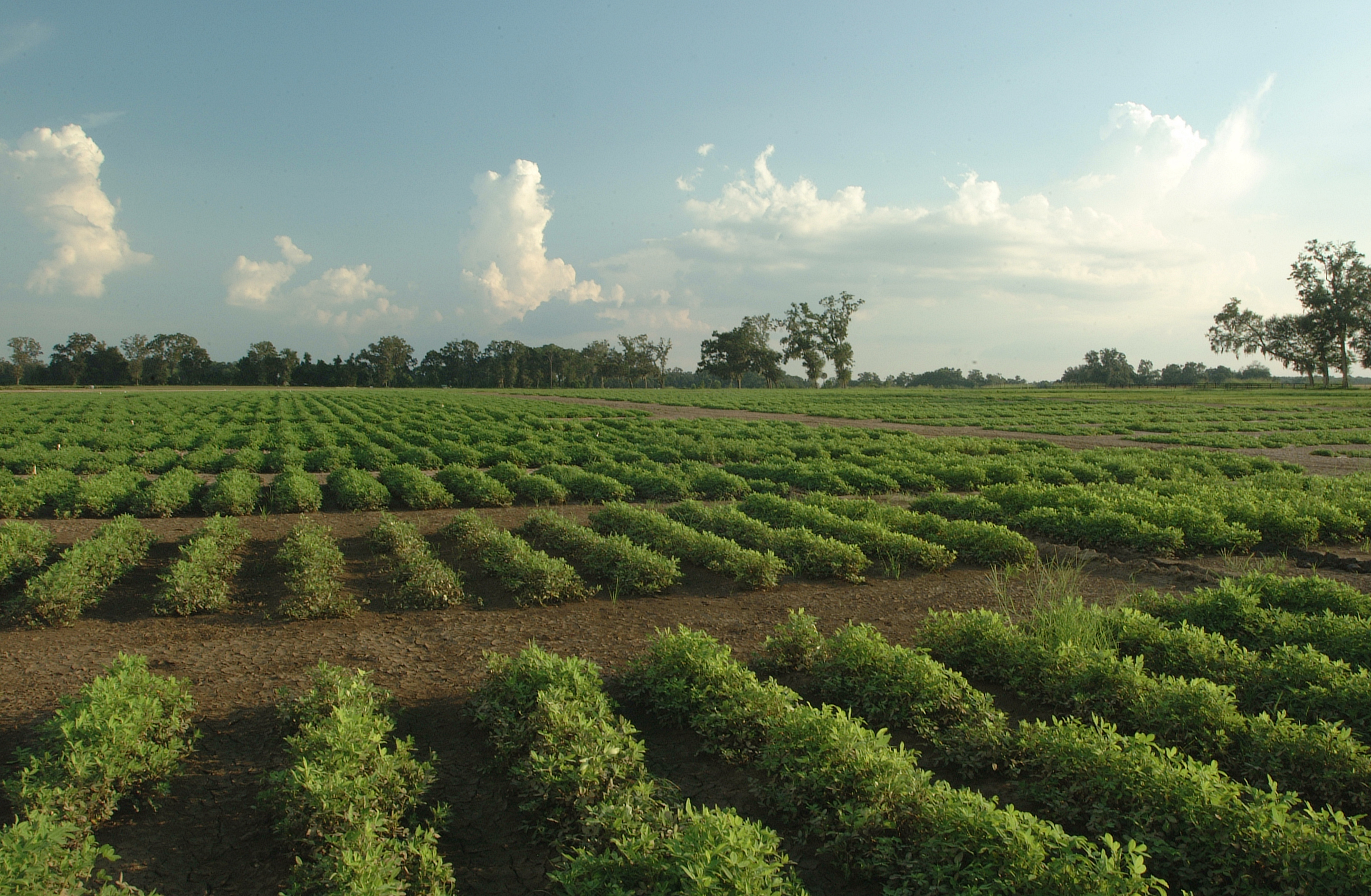 University of Florida and University of Georgia officials said that the programs “build character,” offer “work experience” and “training” for post-release jobs. Many of these programs are technically voluntary, and some incarcerated people have expressed that working outside on a farm is better than staying inside.

But there is limited data on how effective certificates are in helping incarcerated people land a job post-release, and officials did not provide data on what happens to participants after they’ve been through these programs.

“You look at people’s experiences trying to find jobs when they’ve been released, and there’s a lot of difficulty that comes with having a criminal record,” said Wanda Bertram, communications strategist for the Prison Policy Initiative. “Your social network is obliterated by being incarcerated. You’re going back to, often, an impoverished community with fewer social contacts and a criminal record — and in all this, the fact you practiced farm work is supposed to help you?”

Disclaimer: Hannah O. Brown and Becca Burton are employed by the University of Florida. Their contributions to this story were completed as private citizens and not as employees, agents, or spokespeople of the university.