Some of the state’s signature destinations and activities are out of reach for many residents with disabilities, and the onus is often on them to find solutions.

Almost every weekend in early fall, Eric Thompson rides 10 miles down the upper section of Gauley River in West Virginia, in an 7-foot-tall inflatable raft. The seat is modified to keep him secure as he uses oars to navigate extreme whitewater on the river’s famous rapids. A former commercial rafting guide, wilderness EMT, ski patroller, and swiftwater rescue technician, Thompson suffered a spinal cord injury from a car accident in 2012 that left him paralyzed from the middle of the chest down.

With his accessible raft, he can take on the river’s most dramatic sections, including a 14-foot waterfall. The hardest part, he said, is getting someone help him down the roughly 25 feet to the shore in his wheelchair, usually on a steep grade.

With its 1.2 million acres of public lands—much more than many Southern states—West Virginia hopes to become a signature destination for people who love the outdoors. The state has a $12,000 relocation package with free gear rentals to draw new residents; it’s home to the country’s newest national park, the New River Gorge; former coal towns are rebranding themselves as attractions for mountain bikers, hikers, and ATV riders.

But some of its hallmark activities and sites are out of reach for a large swath of its population: As many as one in three of West Virginia’s 1.8 million residents has a disability, according to the Centers for Disease Control and Prevention. One in five struggles with mobility, and the population is among the oldest in the country.

The 1990 Americans with Disabilities Act requires new parks and other recreation areas—or those being renovated—to have accessible parking spaces, routes, toilets, and “spectator seating areas.” (A 2010 revision to the law added nine recreation areas to the list, including fishing piers, pools, and shooting areas.) However, as noted in a National Recreation and Park Association article, “the overall policy of the ADA is to require relatively few changes to existing buildings.” In rural states like West Virginia, where much of the infrastructure is aging, many structures haven’t been modified to meet ADA standards.

A cluster of agencies oversee and manage the state’s public lands, and each has addressed some concerns about accessibility. The West Virginia Division of Natural Resources has for years opened special access roads for hunters with disabilities and has spent tens of millions on upgrades to lodges that anchor state parks. The New River Gorge National Park and Preserve maintains a list of accessible trails and overlooks, campsites, and a fishing spot.

Thompson believes accessibility is “slowly gaining greater awareness” and that necessary improvements to remove barriers to equal access are “slowly being completed within the state of West Virginia.”

But it is still difficult to gauge how accessible and inclusive companies and government entities at the local, state, and national level have made these spaces. As West Virginia expands outdoor recreation, the onus sometimes still falls on people with disabilities and advocates to draw attention to problems and come up with solutions.

“I hear people talking about it more, which is good. Do I think people are talking about it enough? No, I do not,” said Regina Desmond, senior advocate for Disability Rights of West Virginia. “There are pockets of people who are doing it well, and then there are these other vast spaces where it isn’t being done.” 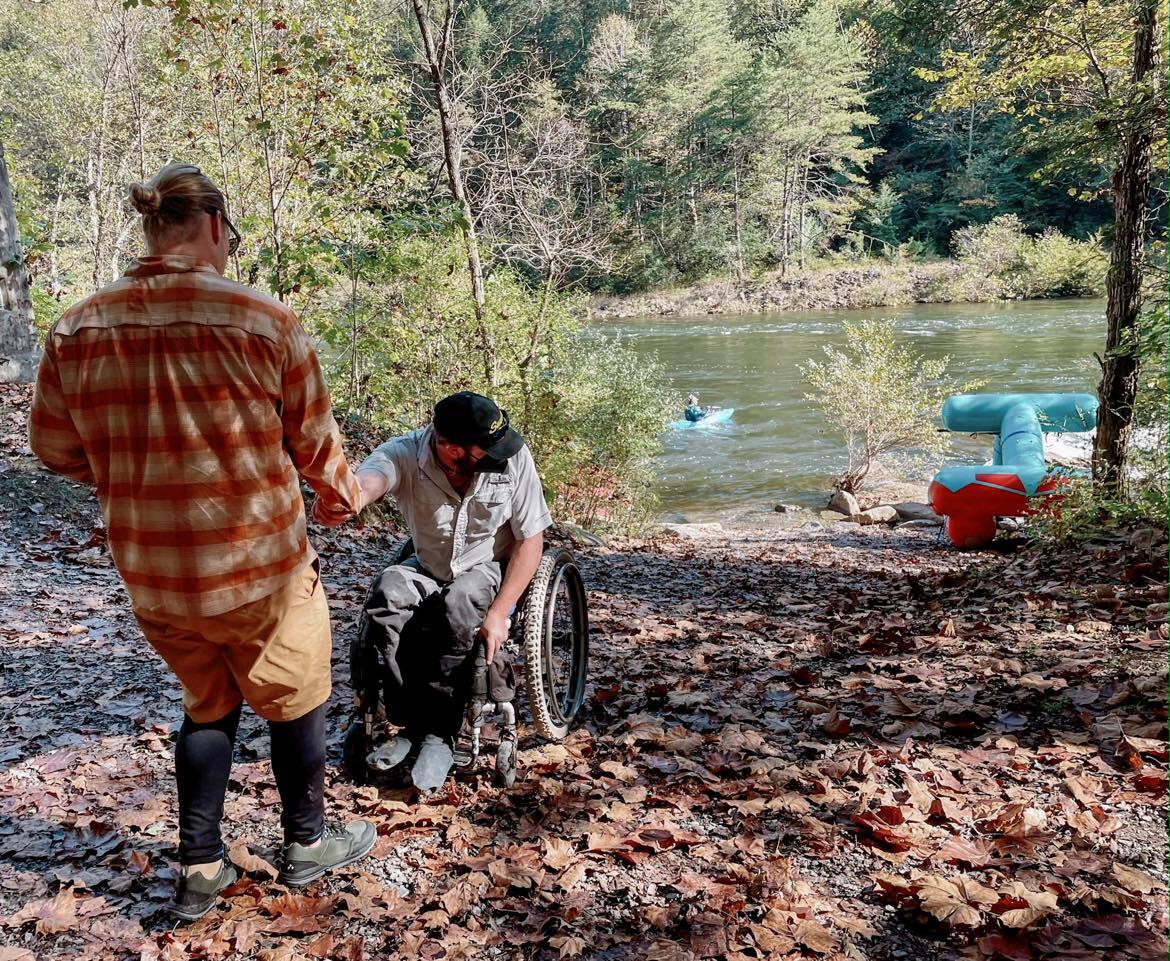 A acquaintance helps Eric Thompson from the shore to the banks of the Gauley River. (Photo by Molly Born)

After his injury, Thompson moved to Thomas, in his home county in northeastern West Virginia, one of the state’s most prosperous mountain towns that has benefited from nearby outdoor recreation offerings. He said most businesses didn’t have an entrance he could use with a wheelchair.

To hasten accessibility justice, Thompson established a nonprofit, Access on the Go, in 2018. As director, he tours some of the state’s most popular recreation areas with park leaders, pointing out places with inaccessible parking lots or entrances—details people without a disability might not otherwise notice.

Other residents have had to take matters into their own hands, as well. Three years ago, Brenda Dasher rounded up $25,000 from Dominion Energy and $10,000 from the Randolph County Commission to build an accessible kayak launch on the Tygart River near her home in Elkins. The new dock allowed people using wheelchairs to get close to the water, and metal plating to ensure chairs stay put.

Dasher, whose son uses a wheelchair, was outside on her back deck one day when she heard a woman in a wheelchair shouting “Thank you!” from across the river as she and her husband watched their kids fish.

“If it doesn’t affect you or someone you love, you don’t have a reason to pay attention to it,” said Dasher, community integration specialist at the advocacy group Northern West Virginia Center for Independent Living.

For the state to catch up to other areas he’s worked in and visited, Thompson said it’ll need to scale up its efforts. Access on the Go is helping identify and close the gaps. Last month, the West Virginia Rivers Coalition held a listening session to discuss accessibility in the Monongahela National Forest, largely because of Thompson’s work. He has been working with the Canaan Valley National Wildlife Refuge on a canoe and kayak launch with accessible parking and a short accessible trail, which was completed this summer. He’s met twice with Hakel to discuss Gauley River access. Hakel submitted plans incorporating his feedback and is waiting to see if funding is available.

Thompson is also working with superintendents of Canaan Valley Resort & Conference Center and Blackwater Falls, both part of the state parks system, to “reassess and update the list of outstanding necessary ADA improvements” including bicycle trails, viewing areas, lodging, and facilities. Swimming pool renovations completed before the COVID-19 pandemic failed to include a changing bench for wheelchair users. The showers have benches and handheld nozzles, but no shower curtains to keep a wheelchair dry.

“Eric’s the one that helps us catch things like that,” Stephen McDaniel, head of West Virginia’s Division of Natural Resources. Such oversights, “they’re not done intentionally,” McDaniel added. “But when we do discover that we do our best to try to work on it.”

The state government and tourism office is aware of the “tremendous” increase in visitors across the last two years, said Neil Hakel, a project manager who coordinates New River Gorge facility operations projects. “Recognizing that making this state more appealing to all visitors will only help to improve state and local businesses and thereby provide the means to protect the resources,” he said.

West Virginia has spent $150 million to upgrade state park lodges and facilities, including $25 million alone at Cacapon Resort State Park, originally built in the 1950s. The remodel means there are now some ADA-accessible rooms at every lodge and every cabin facility in the state parks system in West Virginia, McDaniel said. The parks system is currently working to make all state bathhouses and bathrooms accessible.

Trail access is still a major challenge in many places. Fourteen-year-old Bryson Dowdy of Charleston and his grandmother Linda Streets made that discovery during several state park visits this year. Bryson, who uses a wheelchair, plays several sports and loves being outside in nature. “Some of the paths were not as accessible as you would think [they] would be,” Bryson said. 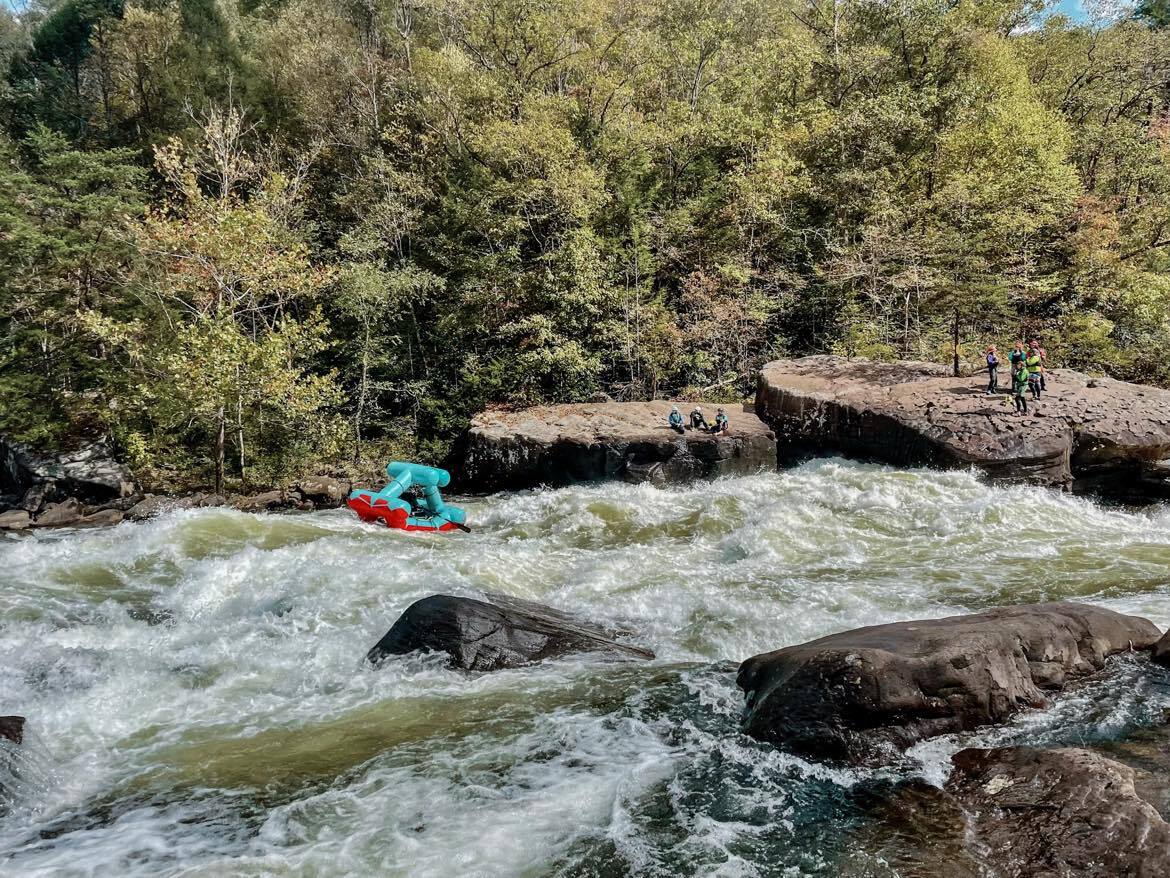 Thompson navigates the Class 5 rapids in one of the Gauley River’s most treacherous sections, Pillow Rock. (Photo by Molly Born)

If he had a wish list, McDaniel said, “money to build a hard surface trail on our gorges and our canyons” would be at the top. The state recently reopened the museum at Hawks Nest State Park, near the New River Gorge, which had been closed since 2006 due to lack of ADA accessibility. It spent $2 million on the project, half of which went to making it accessible, including installing ramps and a wheelchair lift.

“Any time we go and turn a shovel of dirt, that has to be a priority,” McDaniel said. “Our public lands and our facilities have to be accessible to everyone. Not just because of the law, because it’s the right thing to do. We always go into these with the best intentions, but everything that we do takes money.”

Small changes are important: Providing detailed guides at trailheads outlining the path’s length, grade, surface, and elevation, can improve a visitor’s experience and cost a fraction of what it would take to pave a mile of trail, said Syren Nagakyrie, who has compiled trail guides, site reviews, and numerous resources on hiking in the Pacific Northwest at disabledhikers.com.

We want to know about ADA accessibility in parks and public lands where you live. Fill out this brief form.

“Reaching out to disabled folks and getting their input and asking them what they need and why is important,” they said. “We’re really used to having to adapt and build our own accessibility and figure out how to interact with the world in a way that suits our needs.”

In 2019, they were leading a group hike at Olympic National Park where a park road — flat and otherwise accessible — was blocked by large rocks and a gate. A park ranger hiking with the group arranged to get the boulders moved within days. “That created a whole new trail,” Nagakyrie said. “That’s all it took.”

These upgrades are slowly happening in West Virginia, but the onus is still often on individuals. For example, before the Paralyzed Veterans of America visited Snowshoe Mountain, a part-time employee at the resort facilitated the purchase and installation of materials and ramps to make the clay pigeon shooting area accessible and recruited a colleague to resurface the path there.

“It was really just one frontline, hourly employee — he really took it upon himself,” said Carol Woody of the Challenged Athletes of West Virginia, a group focusing on adaptive winter sports based at Snowshoe.

Looking ahead, Thompson of Access on the Go wants to help create an interactive map to guide those with disabilities to accessible recreation, lodging, and restaurants. He also hopes to one day see an adaptive raft like his — which was a donation from his mother, who is also a board member of his organization — in every commercial fleet. In the meantime, he plans to attach a seat to his raft to take people downstream and teach them how to use the oars.

If companies added a raft like his, he said, it would show their commitment to recreation for people with disabilities and put West Virginia on the map as a place to do it.

“There’s no reason this can’t be an accessible destination,” he said. “All these natural resources and all these outdoor sports and all these things that we love about West Virginia, people with disabilities also would love to recreate and enjoy those in the same manner.”