This story was published in partnership with Enlace Latino NC. Léalo en español.

Our connection to land and the way we use it gives us rooted meaning, a home. But climate change, corporate development, and forced migration are all shaking up our ties to place. This week we invited community leaders to share their solutions to the housing challenges faced by marginalized communities on a Spanish-language panel. More than half of Latinx people in the U.S. are burdened by housing costs. Black and Latinx renters also face the greatest risk of eviction during the pandemic.

I keep thinking of the makeshift gardens that I’ve noticed throughout my career as a reporter sharing the stories of working-class immigrant families. The images have stayed with me: Corn stalks double my height planted outside of a trailer. Peach trees flanking an immigrant family’s first owned home. Lush hoja santa blessing the curb leading up to an apartment, growing out a small patch of dirt surrounded by concrete.

In the short time I’ve been reporting on the housing crisis related to mobile home park residents, I’ve listened to so many stories of Southerners forced to move, migrate again, figure out where to go next and what debts to take on so they may plant in the ground and grow from land they can never claim.

These are stories like those of Nancy Barraza and Brenda Lara, of the United Neighbors of Hiatt St. in Greensboro, N.C., who joined our panel on Oct. 19 to discuss ways in which communities affected by the housing crisis are organizing to create viable solutions.

Along with dozens of fellow Latinx mobile home park residents, Barraza and Brenda formed the group to push back against an investment company’s plan to buy Hiatt St. Mobile Home Park and instead buy it as a collective. The neighbors take inspiration from successful resident-owned co-ops in cities like Asheville, N.C., and Pasadena Trails in Pasadena, Texas.

“We are learning a lot,” said Barraza. “We’ve learned things we didn’t know, that even as Latinos without papers we still have rights to defend. We’ve always just stayed quiet because we didn’t know our rights.”

Siembra NC, a Latino-led community organization based in the N.C. Triad, is supporting them in their fight. Executive director Kelly Morales spoke too, explaining how “when a city grows, it puts many families in danger” of losing their homes.

“They got to the point where no one — not a politician nor a landlord — was going to save the situation,” she said. “The neighbors decided together that they wanted to stay. That land belongs to those families who have been there for more than two decades.”

Hiatt St. residents were originally told they would be evicted over the summer, but Morales said, so far, the community organizing bought them until Jan. 2022 to remain in their homes.

We also heard from longtime community organizer Ivan Parra of the N.C. Congress of Latino Organizations, also known as the Latino Congress. He pointed to increasing momentum in recent months that support mobile homeowners, including an August letter to the Government Accountability Office with bipartisan support from N.C. Rep. David Price and WHO. 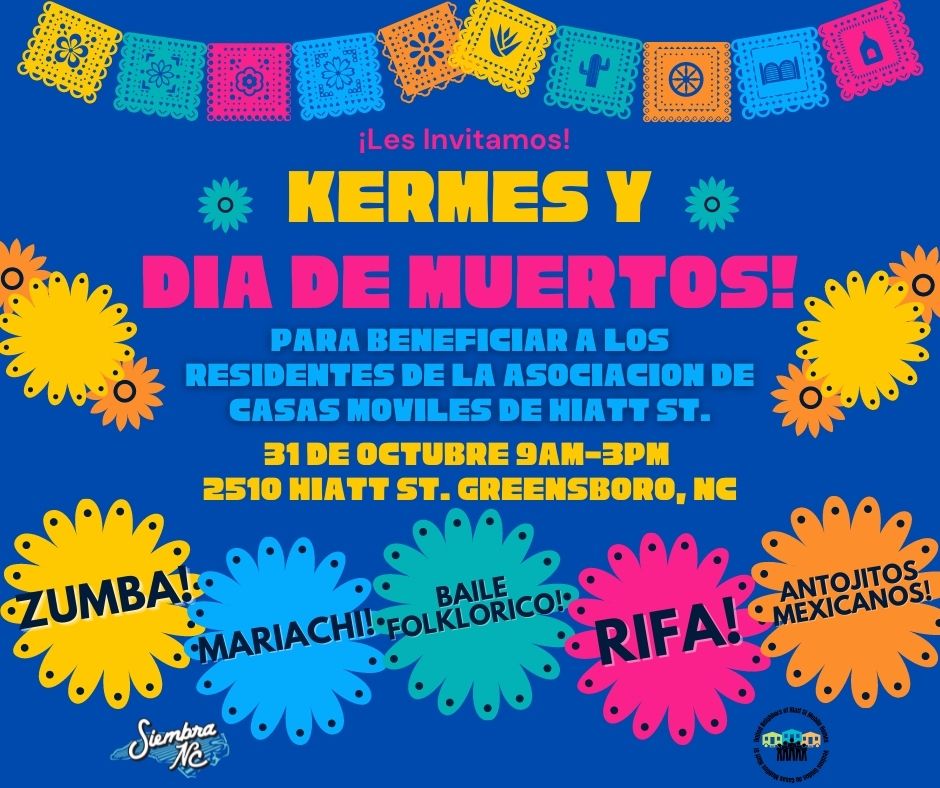 Parra said that by organizing in Orange County, neighborhood residents have won significant commitments from the park owners, including the cancellation of $30,000 debt; over $25,000 in septic repairs; and tens of thousands of dollars in investments in road repairs, removal of deadly trees, and repairs to a well where pump malfunction had left residents without water for over a week.

“In the process, residents have overcome the risk of retaliation from management by forming united and informed groups,” he said.

In Wake County, the Latino Congress and ONE Wake was able to stop the eviction of 300 families. They’re also pushing  a “penny for housing” tax campaign in the town of Cary for a $3 million yearly budget to go to affordable housing.

Nick Macleod of the NC Housing Coalition was quick to point out that the state could enact policies that would further support renters and mobile homeowners, such as the “right of first refusal” that would enable them to have the first shot at buying a property ahead of a potential eviction.

“That would be powerful because it creates a law that demands the owner work with the renters and give them the opportunity to purchase,” he said.

In order for these policies to garner attention on the state level, Morales emphasized the need to support “pro-pueblo” candidates during local elections.

On Monday, more than 250 Latinx community members will meet with seven Durham mayoral and city council candidates at the Immaculate Conception Catholic Church on Chapel Hill St. Parra said one ask from the community will be that the next mayor collaborate with the city’s district attorney to keep renters from bearing the burden of minimum housing code violations, which are uncovered during inspection per the state’s habitability laws.

Currently, Parra said, the DA is not prioritizing these cases because of a lack of resources. “The lack of accountability prevents the city  from holding landlords accountable for code violations,” he said.

As for the Hiatt St. neighbors, they are hosting and inviting the entire Greensboro community to a kermés, or mini-festival for Day of the Dead on Oct. 31 from 9 a.m. to 3 p.m. at 2510 Hiatt St. Sixteen families facing eviction are collectively raising funds to purchase the mobile home park. There will be food, live music, folkloric dance performances, and more.

To watch the video in Spanish, visit Enlace Latino NC’s Facebook page. Due to technical difficulties, Southerly posted only the second half in English on Facebook.

This story was supported by Solutions Journalism Network.