Eunice residents don’t want to kill coal—they just want regulators to force the mine next door to stop making them miserable.

This story was co-published with Mountain State Spotlight, a nonprofit news organization that aims to hold the powerful accountable and tell the stories of West Virginians and the issues facing their communities.

It started with the noise, the round-the-clock roar of a mine ventilation fan. Then came the blasts that shook the houses in the small Raleigh County community. Then the coal dust, coating neighbors’ cars. “There’s no other way out of it,” Rick Jones said. “It’s either buy us out or we’re just going to have to live in it. Because it’s not going to go nowhere. It’s there to stay.”

Jones and his neighbors were gathered beneath a roadside park pavilion, sharing stories about a new member of their community along the Big Coal River: the Black Eagle Mine.

All of these neighbors know the coal industry’s grip on places like Raleigh County. Some of them work in the industry, like Jones, who drives a truck for a contractor hauling coal from Black Eagle.

“There’s a lot of people in this community right here that actually make their living down there,” he said. “We’re not after that”—closing the mine, or anything that would affect peoples’ jobs.

But after three years of living next to a coal operation that’s ramping up, from 61 jobs in 2019 to 168 this year, they’ve grown frustrated. They want someone to fix the problems they’re experiencing—or they want out. 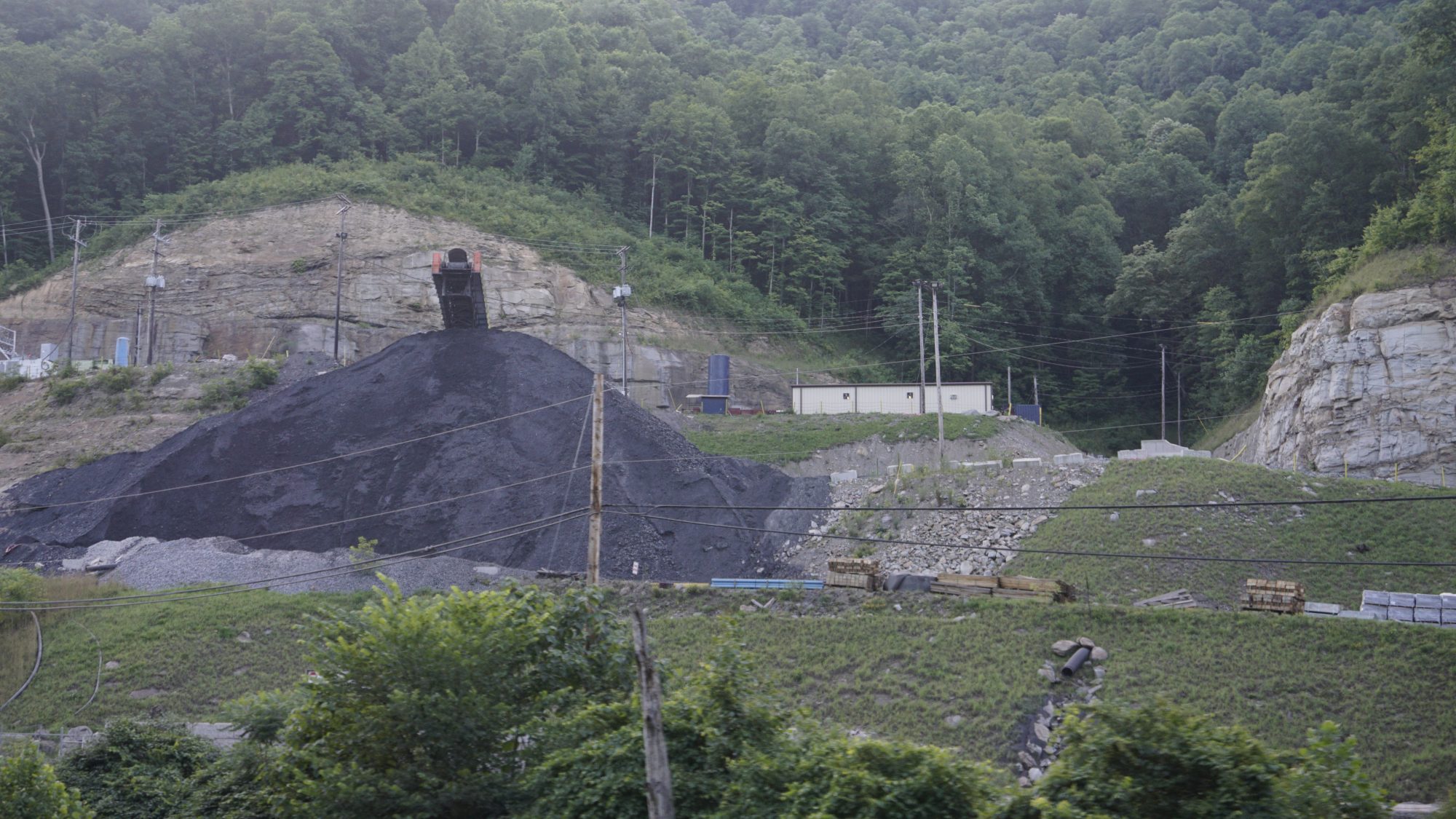 Coal outside the Black Eagle met coal mine. Photo by Mason Adams

The Black Eagle mine, which is owned by Marfork Coal Company, began operating in 2018. Marfork’s parent company is Alpha Metallurgical Resources, the former Contura Energy, formed by the 2015 bankruptcy of Alpha Natural Resources.

This mine and its parent companies reflect larger shifts in West Virginia’s coal industry. The market for thermal, electricity-producing coal is shrinking as utilities close coal-fired power plants in favor of cheaper natural gas and cleaner renewables. But there’s still demand for metallurgical, or coking, coal, a key component of steel.

Driven by global steel demand and a state government hanging on to what’s left of the industry, a mine like Black Eagle can continue to make life uncomfortable for the people who live closest to it.

The ventilation fan was the first issue; Marfork cranked it up in the spring of 2019. It was already loud, but when the company changed motors on it in late 2020, “that’s when it got unbearable,” said Shelia Walk, who lives across from the mine.

Coal dust started blowing from a pile of coal at the mine’s entrance and spilling from trucks as they hauled it out along West Virginia Route 3. It continues to accumulate, lingering in the air and stirring up from the road when vehicles pass by on dry, dusty days.

The dust “has bothered me, me being older, too, with my breathing,” Aliff said.

Anita Jones, Rick’s wife, complained about the appearance of “black, cobwebby looking stuff” on pictures hung on the wall facing the mine.

“It’s on the inside of the house, it looks like soot from a stove,” she said. “I clean it, but every two weeks you can see it hanging from the wall and the pictures.”

Nobody uses their front door anymore, and a layer of fine particles can accumulate on vehicles overnight, or even over the course of some afternoons. The above-ground swimming pools in backyards across from the mine have been abandoned.

Alleson Sneed pulled up a photograph on her phone showing her grandmother’s ventilator, which appeared filled with a black substance.

“That’s coal dust,” Sneed said. “It’s bad. The bottoms of your feet, when you wake up in the morning, your feet get covered in black, just walking from the living room to the bathroom.”

Dust drove Sneed’s grandmother out of the Eunice house early in 2020, but she recently returned to take care of another family member.

“She had to be put on a portable ventilator because of the dust,” Sneed said. “It’s caused a lot of distress in the family.”

The family also said blasting at the mine has caused cracks throughout their house. Other neighbors reported similar damage to their homes.

“The ceiling in my bedroom started falling because of the blasting,” Sneed said. “We can’t even stay in our own bedroom. It’s dangerous. The ceiling fan fell off the ceiling.” 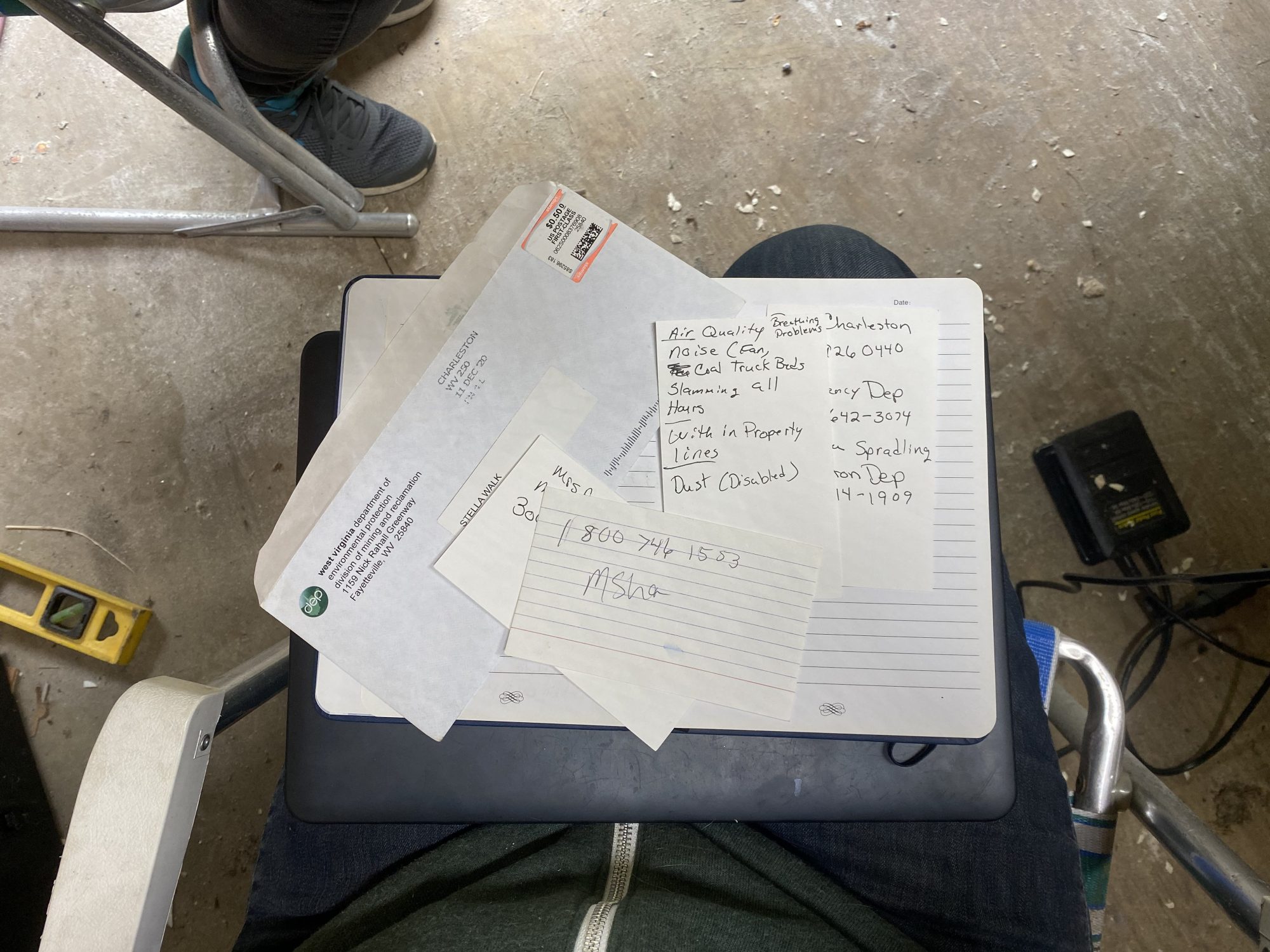 Documents and complaints from Eunice residents about the Black Eagle coal mine. Photo courtesy Megan Kelley

When Annabel Aliff moved to Eunice in 2001, she was trying to get away from another coal mine. She’d lived in the nearby town of Sylvester, where she recalls an explosion at the nearby Massey Energy mine sending a rock that landed on the steps of her trailer, among other problems.

She attended a community meeting and said she signed up for a lawsuit against Massey but later decided to settle out of court.

“I just wanted away from it all,” Aliff said. “I sought out and got out and moved here [to Eunice], and thought I could live here until I die.”

The first complaint against Black Eagle came in 2019 from Whitesville Mayor Fred Harless, who said Marfork was tracking mud into the road. That led to a violation from the West Virginia Department of Environmental Protection, one of two since the mine opened.

As their frustrations mounted, neighbors in Eunice started to talk with each other and eventually decided to take action. They unsuccessfully tried calling Marfork and contacted the DEP.

Walk and Anita Jones both filed complaints about the loud ventilation fan in December 2020 with state regulators. Responding to both complaints, DEP investigator Matt Dillon told them the agency has no noise regulations, but that he’d try to contact Marfork Coal about it, according to the DEP’s records. He learned about the change in the fan’s motor, and reported the company also planned to use acoustic foam and a concrete wall to try to deaden the sound.

Walk later made two complaints in January about the noise and coal dust. In the complaint filings, which were added in early October, Dillon listed 16 inspections that occurred in 2021 through September. “No dust was noted on any of these days,” he wrote.

Eunice residents say other calls to the DEP have gone unanswered.

“There’s no response or no answer,” said Anita Jones. “You can leave a message, and they don’t call you back.”

Walk said she called the DEP to request dust monitors, but was told none was available. That request is not in DEP records for the Black Eagle mine. Residents said they want dust and noise monitors to be installed in the community, and for those impacts to be mitigated by the company.

DEP spokesman Terry Fletcher shared the agency’s record of complaints and violations—which are public but difficult to access—at Black Eagle, including the addition of the two complaints in October.

“The WVDEP is not aware of any other complaints submitted to the agency regarding this facility,” Fletcher wrote in an email.

Fletcher said the agency’s policy is to respond promptly to complaints and inform residents of the results of an inspection and any actions taken to rectify the situation within 10 days. Fletcher added that the agency wasn’t aware of any requests for air monitors; its Division of Air Quality maintains permanent monitors throughout the state and he said they “will investigate dust and air quality complaints and take enforcement action when appropriate.”

Alpha Metallurgical Resources would not answer specific questions about the mine or complaints in Eunice. A spokesperson provided a prepared statement: “Alpha is committed to operating safely and responsibly at Black Eagle and across our entire portfolio of mines. We strive to fully comply with—and, in many cases, positively exceed—the requirements set by West Virginia Department of Environmental Protection and other regulatory agencies. We also strive to be a good corporate neighbor, interacting with local community members to hear their concerns and taking pride in the positive impact we create in the communities where we operate.”

With the state’s inaction, Eunice residents began reaching out to southern West Virginia’s activist network. Shelia Walk talked to her son, Junior Walk, outreach coordinator at Coal River Mountain Watch, and Vernon Haltom, the executive director, for advice on potential violations to watch for and who at the DEP to contact. They also tapped an activist with the campaign against the Mountain Valley Pipeline, who wrote and shared a news release about the neighborhood’s plight.

Black Eagle eventually moved the ventilation fan from the main portal to a location that’s not quite as loud for most of the neighbors. They say it now sounds like a lawnmower, a big improvement from before.

But a solution for some just exacerbates the problem for others. Robert Canterbury said the fan’s new location is just across the river from his grandmother’s empty house, which he’s been renovating for sale. The house is now the closest property to the fan, which he said has made his property worthless.

“I put almost $15,000 in renovations on the house: new roof, everything, to get it ready to be sold,” Canterbury said. “And then this. With the fan being right outside the back door, nobody wants to live there. And now I’m stuck with it.” 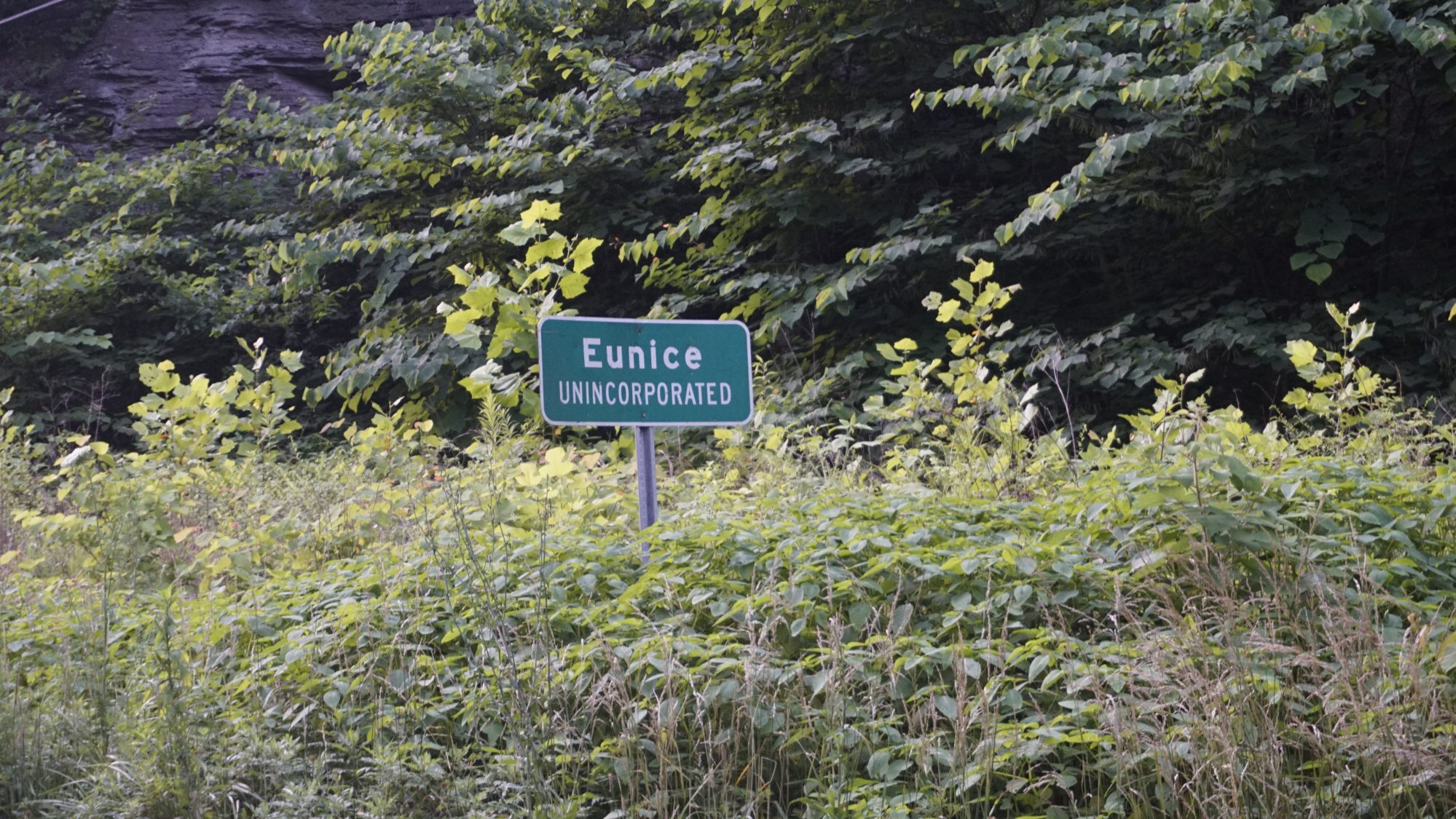 With discussions about the clean energy transition and post-coal economic aid taking center stage nationally, the story of Eunice reveals that coal is struggling on, buoyed by small upticks in demand and production. And those mines still create major problems for the people who live nearby. Politicians focus on these mines to create false hope of a bigger coal boom coming—if only the regulators and activists would shut up.

But even with the opening of new mines, West Virginia’s coal production still stands far below what it did even a decade ago.

As one of the top three contributors to carbon dioxide emissions, however, the steel industry is increasingly looking for ways to decarbonize. Steel production is responsible for 7% of humanity’s greenhouse-gas emissions, and 70% of the industry’s emissions are tied to coal. Some steelmakers are looking to replace coke, or processed coal, with biomass or water. Others are looking to carbon-capture technology.

Even for West Virginia’s high-quality met coal market, an end appears to be in sight, whether through decarbonization or simply the exhausting of profitable mines in coming decades. Alpha projects its primary met coal mines all have lifespans of less than 30 years.

But none of that helps the Eunice residents, who want a resolution now. Many say they’d move, but their houses have actually lost value due to the proximity of the coal mine.

Raleigh County residents can file complaints to the West Virginia Department of Environmental Protection by calling its Fayetteville office at 304-574-4465 or the agency’s headquarters in Charleston at 304-926-0499.

“We’re just wanting to get out,” Sneed said. “It doesn’t matter if they buy us out or if we sell out, or even if we leave the place sitting and we just move.”

Most want Alpha to buy them out altogether. Several other Eunice households were purchased by a land holding company in 2017 to make way for Black Eagle.

Generations of West Virginians have had to deal with the reality Eunice residents are facing: Coal’s other detrimental effects are the tradeoff made to this powerful industry, even as it declines.

For Shelia Walk, if the company won’t buy her out, there’s an alternative: “fix the noise and dust.”

“Shelia,” Canterbury interjected. “There’s really no possible way you could do either. You can’t do it. It’s part of the operation.”

Mason Adams has covered mountain communities since 2001. He writes from Floyd County, Virginia. Find him on Twitter.