A North Carolina truck driver turned coder uses technology as a gateway to local impact for farmworkers and other rural immigrant communities.

This story was published in partnership with Enlace Latino NC. Léalo en español.

The tiny old radio in the Arevalo family home was no match for a child’s nimble fingers. Kevin Arevalo used to spend afternoons dissecting its wires, gears, and metal prongs and putting it back together. “Growing up we didn’t have much money or tech, but we had that old radio,” Arevalo said. “It was always very intriguing to me … seeing how stuff works.”

That innate curiosity prepared Arevalo, 30, for a life as a web developer. Today he is among six worker-owners that founded Radiate Consulting, a technology company that is a cooperative, or co-op. Arevalo leads the North Carolina chapter from his home in Wilson.

But the first-generation American’s career path was circuitous. Inequality persists in the tech industry, which employs mostly white and Asian men. Companies did not disclose the demographics of their labor force until 2014, when Google released its hiring data: just 2.9% of its workers were Latino, and 1.9% were Black. That same year, the Diversity in High Tech Report from the U.S. Equal Employment Opportunity Commission (EEOC) revealed that the percentage of Black employees in high-tech industries is 7.4%; for Hispanic employees, 8%. According to Forbes, those numbers have barely budged since.

The cooperative offers clients traditional tech services, like website creation and management, and app development. Radiate North Carolina is a partnership between Durham’s Code the Dream—which teaches code for free to people typically left out of the industry—and the Democracy at Work Institute (DAWI), based in California, which creates business ownership opportunities for early-career BIPOC, immigrant, and contingent workers who face barriers to good jobs, like inconsistent work, discriminatory hiring practices, workplace discrimination, wage theft, and more.

Founded in 2015 by Ramiro Rodriguez, Daisy Magnus-Aryitey, and Dan Rearick, Code the Dream grew out of the idea to provide young immigrants with DACA status—commonly referred to as DREAMers—the opportunity to train in the tech world. It eventually grew to serve anyone from marginalized communities.

Rearick said there are roughly three cohorts per year with around 30 students each; half of Code the Dream graduates identify as Latinx. Many, if not most of them have immigrant backgrounds.

“There are hundreds of apps if you want to find the best cup of coffee or manage your investments,” Rearick said. “But the tech industry needs more folks like Kevin [Arevalo] who understand the needs of the communities they are coming out of. What he brings to the table when thinking about technology is so different.”

Born in California, Arevalo was raised in Durham as the only son of a single mother who fled El Salvador in the 1980s during the civil war. He spent weekends selling vegetables at flea markets with his mother and two older sisters, and his weekdays playing school sports.

As an adult, Arevalo spent over five years in construction and then worked as a truck driver hauling lumber across the country. He took a semester of community college courses, including computer science, but couldn’t juggle both classes and work. He also has a son, so making money took precedence. Arevalo enrolled in courses in 2018. He remembers the first time he worked on a “little piece” of HTML and CSS.

One of the first apps he worked on was Vamos, which helps farmworker outreach staff map out and find labor camps every season in order to better allocate resources for a rural population often left uncounted. According to Code the Dream director of programs Lori Fernald Khamala , the idea for Vamos emerged when a volunteer for Episcopal Farmworker Ministry in eastern North Carolina worked on farmworker outreach after a hurricane.

“That volunteer worked as a software developer in his day job, and he quickly realized how beneficial it would be to have an app to help with the planning, implementing, and reporting on outreach to farmworkers in such remote and rural areas,” she said.

Five different organizations in six states currently use Vamos to reach over 10,000 farmworkers. 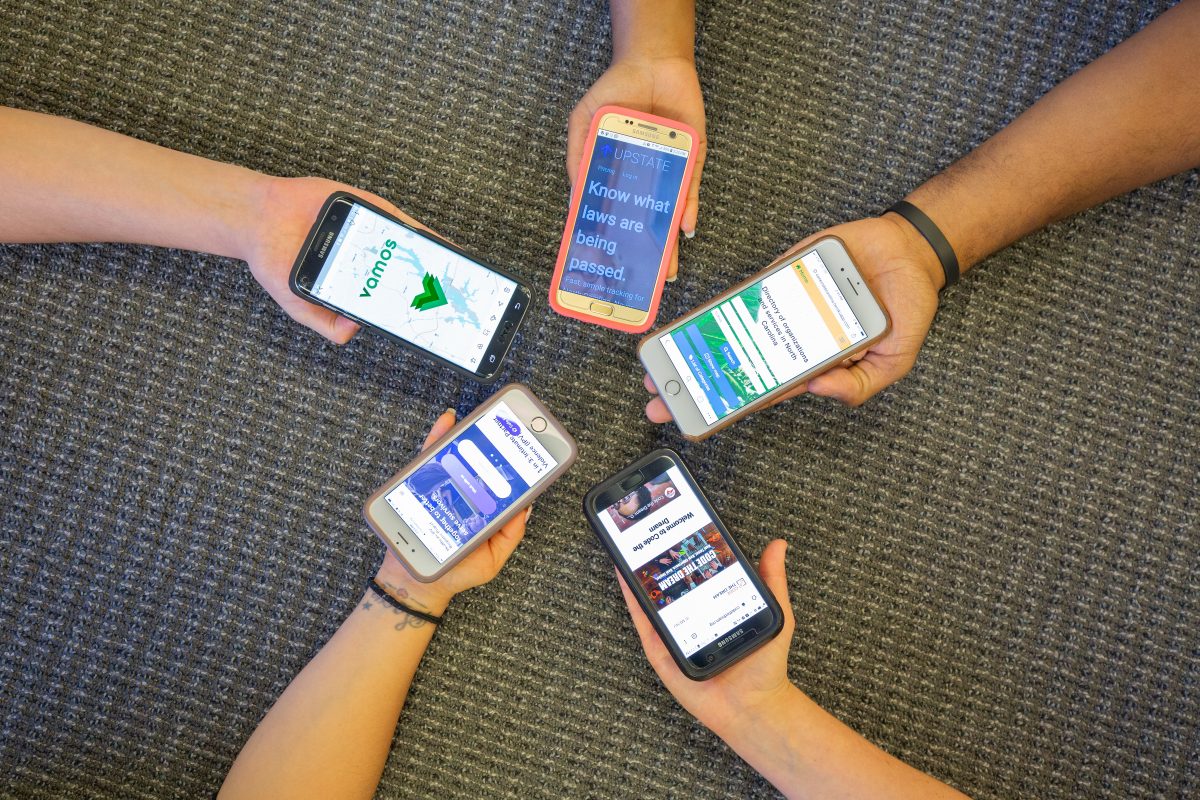 Arevalo also helped develop Conéctate Carolina, an online directory of organizations and services available to the more than 150,000 farmworkers in North Carolina.

“Support resources can be few and far between in rural communities,” said Fernald Khamala. “There are additional barriers like language and internet access, so a mobile app that offers information in Spanish based on your local area could be a gamechanger.”

Users can search for resources on Conéctate by geographic location or category—education, legal, health, housing—in both English and Spanish. Conéctate also has a bilingual alert system for weather and public health events such as COVID-19 vaccine and prevention information.

Code the Dream teamed up with Student Action with Farmworkers (SAF) to create the app. According to SAF program director Sandra Rodriguez, the organization has heard anecdotes from farmworkers that were made aware of severe weather emergencies and COVID alerts thanks to Conéctate.

“Doing these two projects for farmworkers got me thinking how I can use tech to help my community,” Arevalo said. 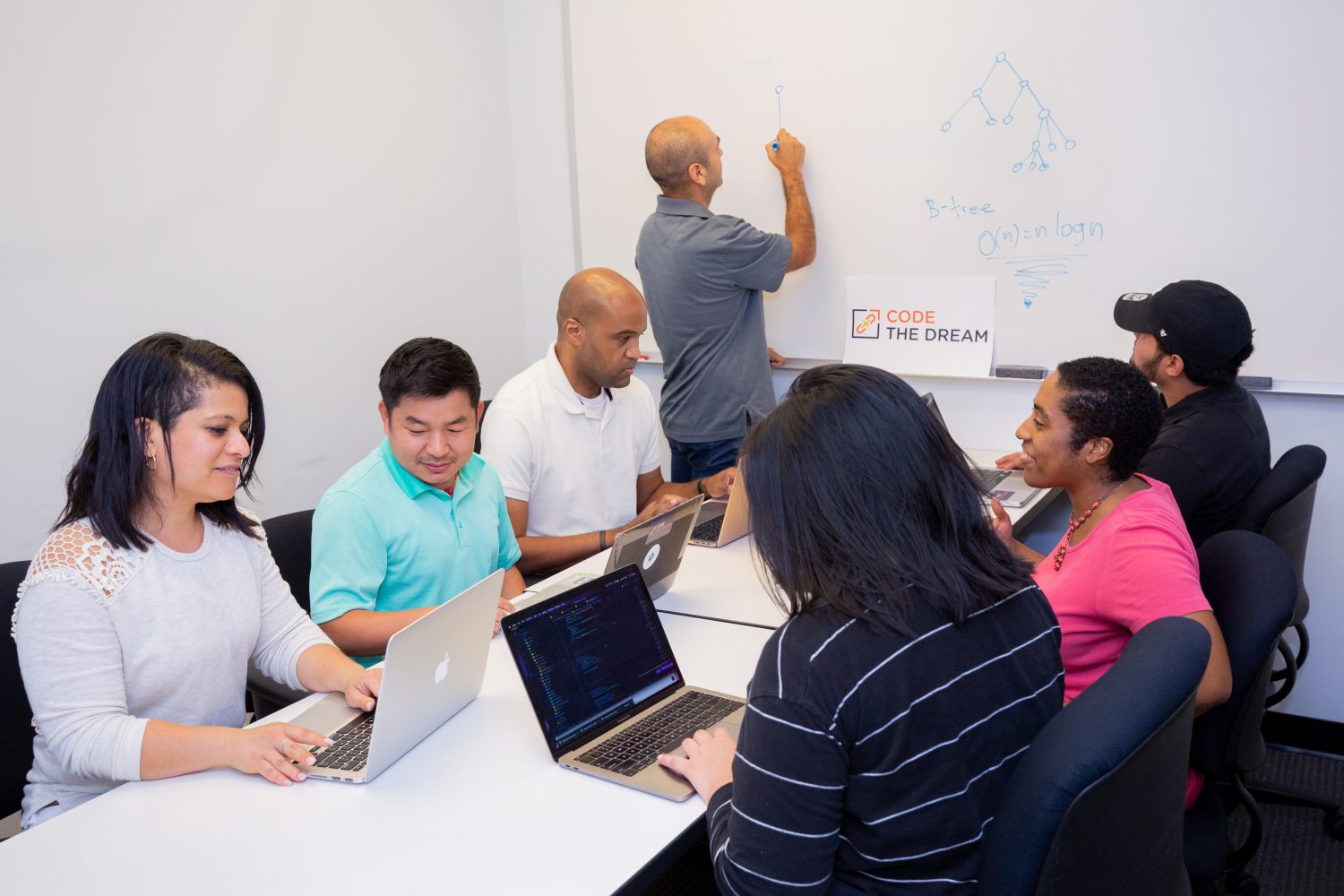 Ramiro Rodriguez teaches a class for Code the Dream. Photo by Eric Atkinson/Code The Dream

According to N.C. Tech Association, North Carolina ranks seventh nationally in tech industry employment growth, and the industry’s indirect economic benefits, such as local businesses those workers patronize, contribute about 20% of the state’s overall employment. As big tech like Apple and Google move into North Carolina, Code the Dream remains firm in its ethos. The founders wrote an op-ed in the News and Observer this spring asking: “But which neighbors will benefit most? Who is likely to get those thousands of new six-figure salary jobs?”

Radiate “sits right at the intersection of the two motivating reasons behind Code the Dream,” said Rearick, “creating economic opportunities for folks who should have had it all along and making the decisions about what technologies are really needed in the first place.”

Since Arevalo became a web developer, he has honed in on a network of other Latinx people in the industry, first through Code the Dream and expanded through online channels like Techqueria, where he has met programmers living and working in El Salvador, his family homeland.

“Because coding is all about problem solving, it has taught me to look at how I live my life differently,” he said. “It opened my eyes to see that technology is not just for people to have fun. It makes an impact.”

Victoria Bouloubasis covers the intersection of environmental issues and economic mobility in Latinx, immigrant, and refugee communities in North Carolina for Southerly and Enlace Latino NC. She is a journalist and filmmaker based in Durham.