We asked readers to tell us about their favorite places to jump and wade in the water. Here’s what we received. 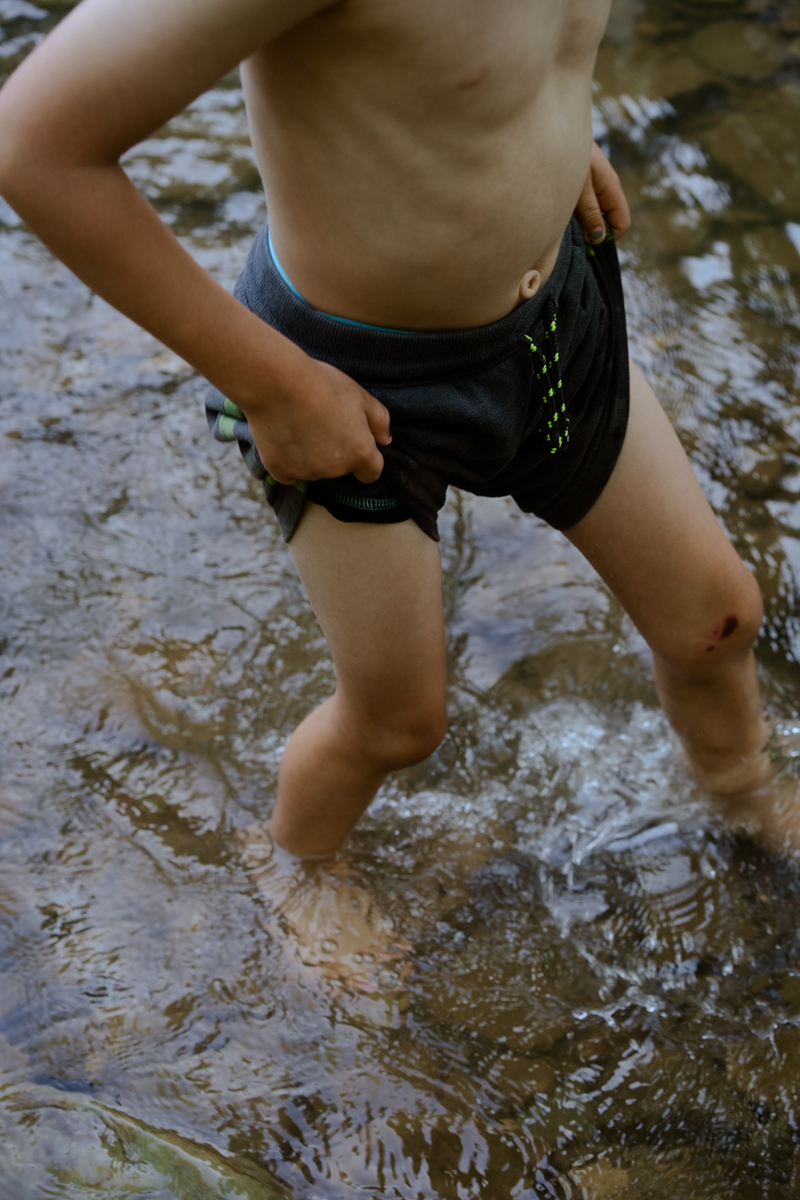 “water greetings” by Natosha Via 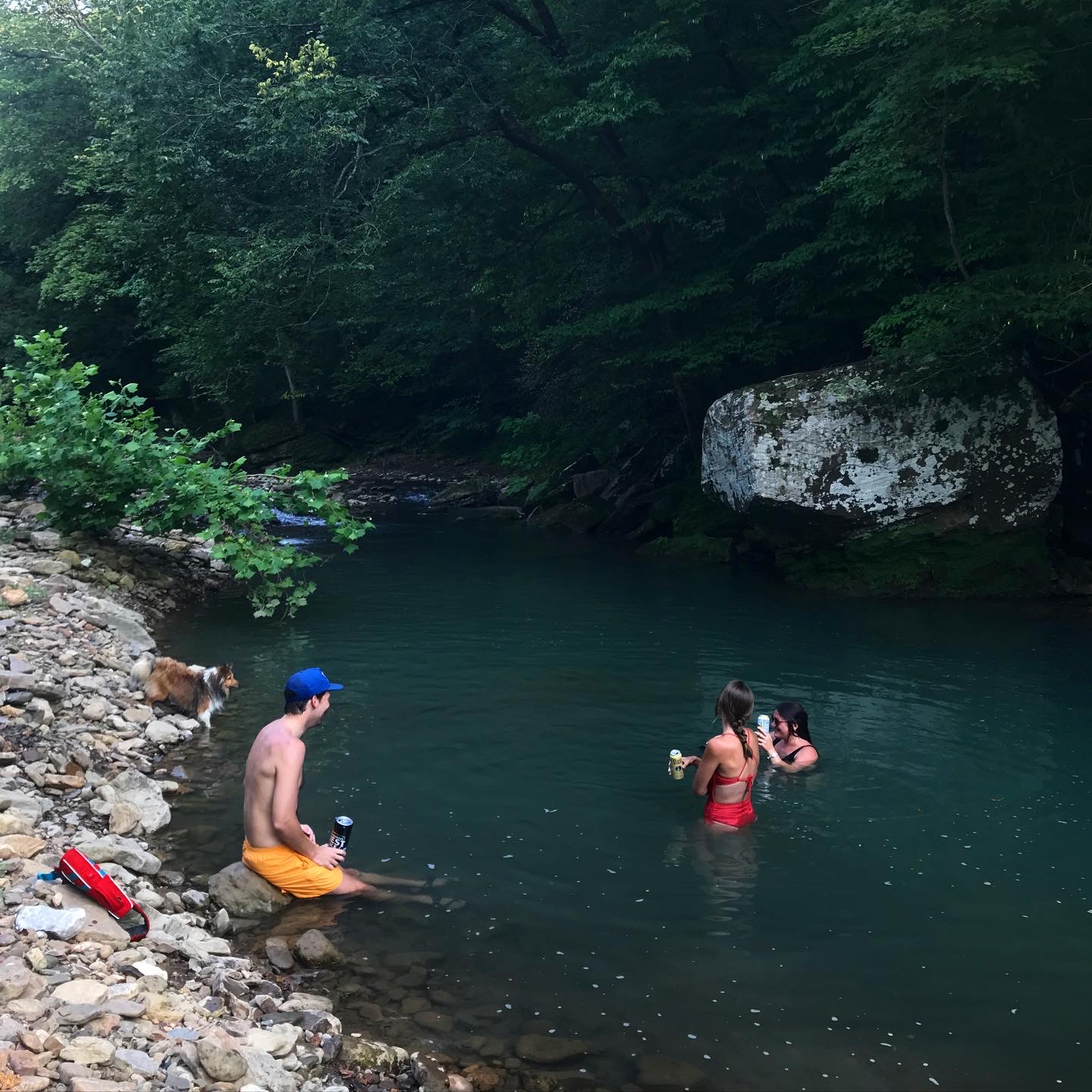 There’s a section of a fork of a river — I won’t tell you which one — that runs through the Ozark land  where my great-grandparents’ old farm is. Ozark rivers run blue, an unearthly blue that changes with seasons and river levels from deep to vibrant to muddy and churning. The best swimming holes on that section of that fork of that river are a deep, clear blue in the summer.

I moved home to Arkansas during the pandemic, quarantining in a van on the banks of that section of that fork of that river for a few weeks. My life revolved around the river. I read on the bluff above it in the morning, jumped in a swimming hole in the heat of the afternoon sun, and sat on the bank at night with my feet in the water, watching the stars push through the night sky. My great-grandmother used to bathe in that same swimming hole, the stories go, in the years before there were industrialized poultry farms upstream. There’s something extraordinarily grounding about knowing that we share the experience of sliding into that blue, sun-warmed water and just being for a while.

“water greetings” by Natosha Via

I grew up in Tallahassee, which when I moved to DC then Boston meant explaining to people that I was from Florida but not Beach Florida—I was raised by Sinkhole Florida, Springs Florida, River Florida. Distinguishing the water bodies I grew up swimming in felt important to explaining my childhood. Of all the inland waters I love, Wakulla Springs stands out: from the small shore, you can see gators slipping in and out of the water beyond the swimming area rope, herons taking off, the occasional manatee poking its head up to breathe. I can still feel the rush in my stomach of jumping off the concrete high dive and into the cold spring water, knowing that it went down for hundreds of feet below me. It’s where I learned about Florida’s network of underground caves and about the people who dive down to explore them, and Wakulla Springs led to was my early understanding of how waterways get polluted, when the clear water became so cloudy that the glass bottom boats stopped running. 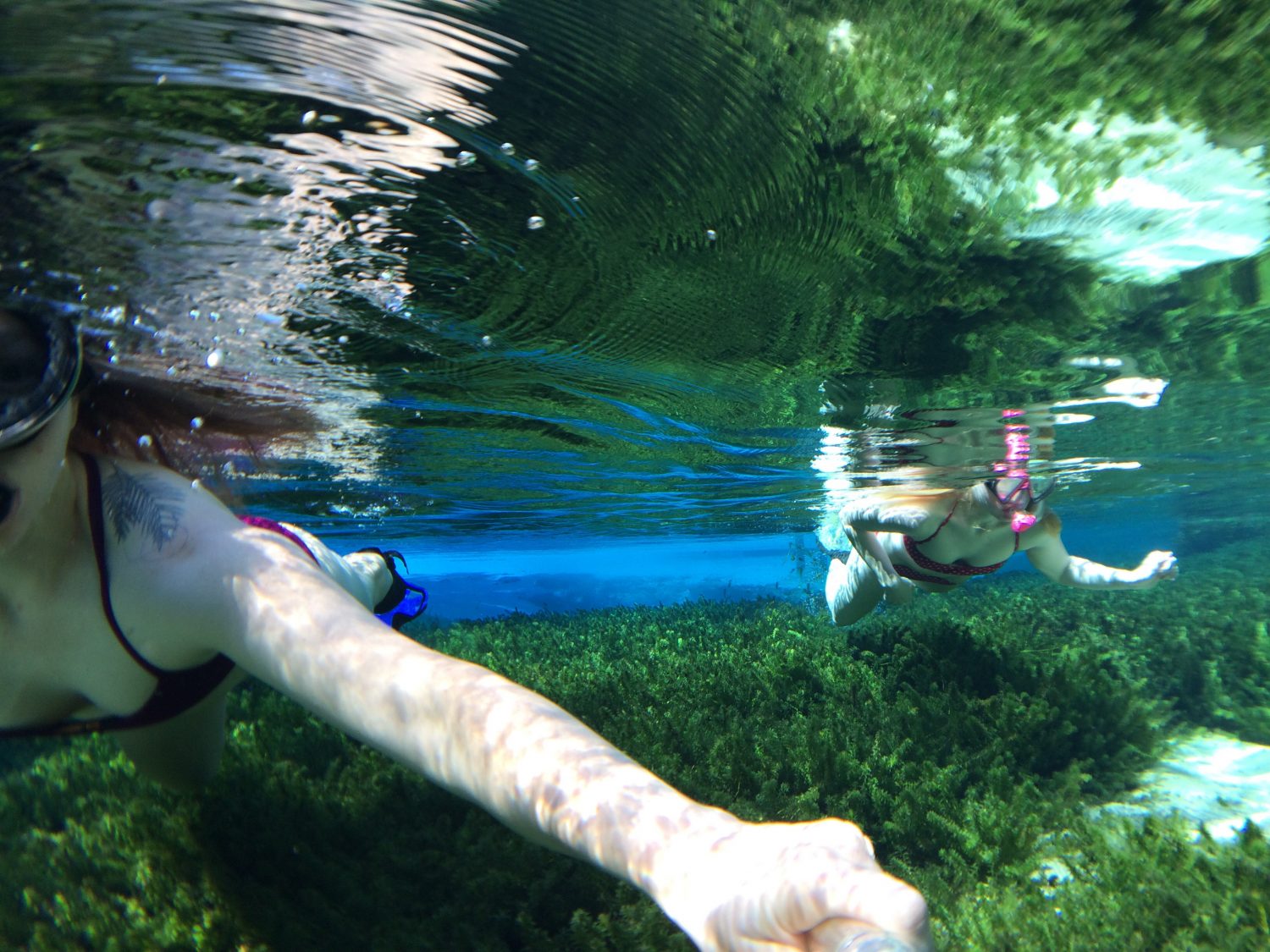 Hands down, all time great Kentucky swimming hole, hidden in plain sight: Cumberland Falls. You’re not ~allowed~ to swim at the bottom of the stairs past the overlook, in front of the boulders that punctuate the upriver side of the beach, but if you do, you might feel how I did when I wrote this song:

Rhododendron by the moonbow falls – “You’re getting sand on my overalls!”

Mathilde hollered from atop the boulder, sun bouncing off her golden shoulder.

Hold up, how’d we even find ourselves now? Golden river in misnomer county –

Up on the boulder there’s no when or how, only the ever-flowing holy mount to sea.

📍 The fork of two creeks in Fleming County, Kentucky 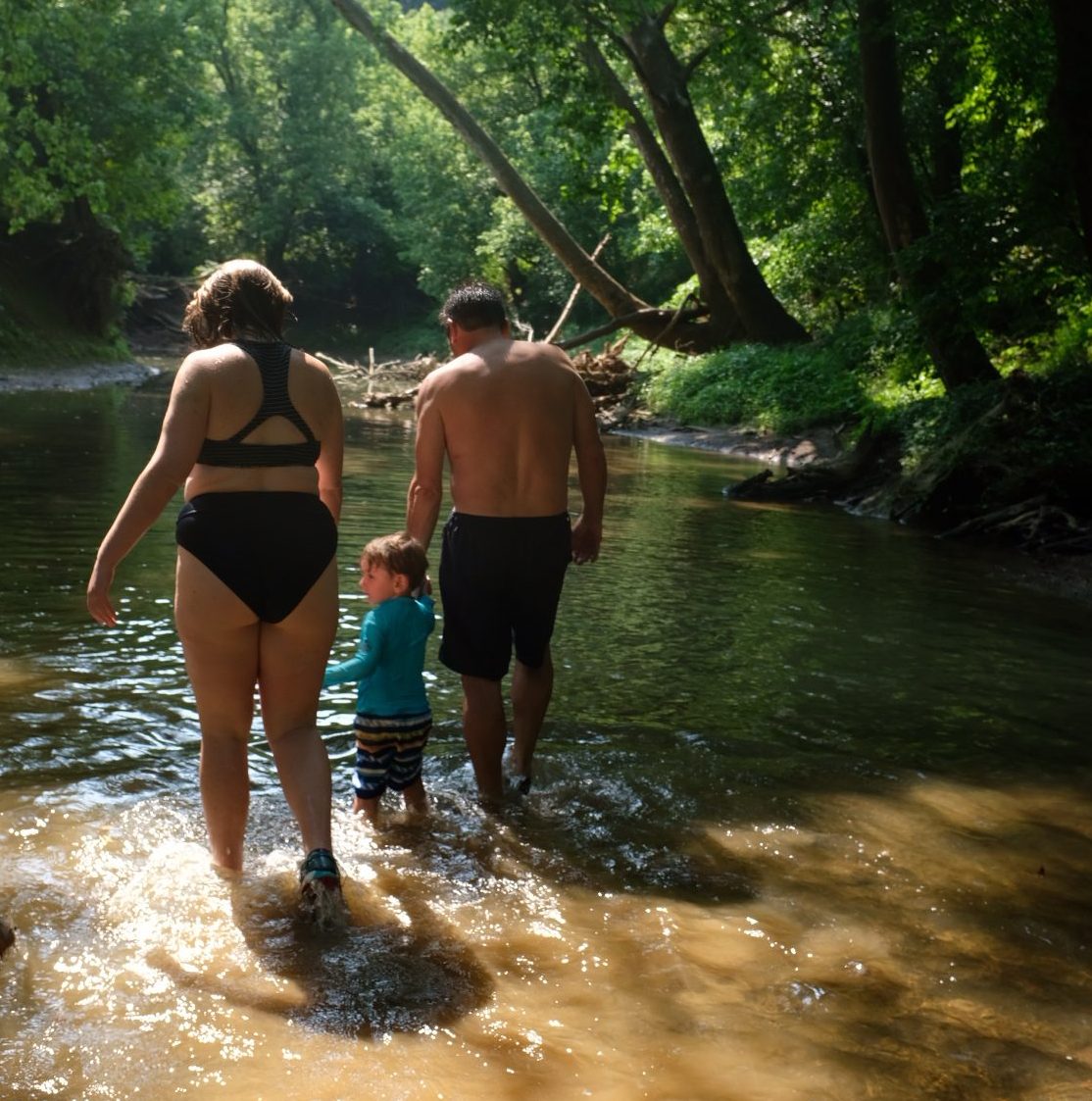 I married into our swimming hole. It is situated at the fork of Absalom and Johnson Creek in Fleming County, Kentucky. It’s history is not mine by birth, but one I have gained. The same creek was once swam by wooly mammoths, Native Americans and Daniel Boone. It was a source of medicinal saline water famed by Blue Lick Water Springs. Today, it’s banks are lined with old tires and farm equipment pushed down stream from neighboring farms and highway overpasses. My son comes by this creek honestly and is especially proud of it. At age three he has a good understanding of what a sacred place The Creek is for our family.

That’s the allure of it. The little rock quarry in the south of town is no bigger around than a pond, but it’s almost four hundred feet deep.  It spurted to life at the end of the Industrial Age when at last the useable rock was spent and the machines hit a spring on their way out. They’re still rusting at the bottom, the machines, we’d whisper to each other, like they could snag a piece of your clothing and take you with it. Before that it was Fort Dickerson in the Civil War, to protect the city of Knoxville from the Confederacy. The waters shimmer with a green light in the afternoon, something beneath the surface, it’s something in the minerals, I’ve been told,  coming off the limestone.  In the evening it’s ghostly under the pale, waning light; in the night the cliffs that encircle it fade blackly into the starry water, a place without beginning or end.

When I first drifted into Knoxville as a bedraggled scamp and hippie kid barely out of high school, we entered under and through the kudzu, down the old gravel mining road. In summertime the fireflies would flicker in and out of the vines.  I sometimes went barefoot, and when the gravel hurt my feet I told myself that was what getting stronger felt like. You weren’t supposed to go in at night but used to you could do it. In recent years the city has paved over the trail and put in a new parking lot and fences that made it hard for dumb kids like us to sneak in.

The quarry confers power and then takes it. One time I was swimming with a couple of friends on a summer and a skinny little woman swam up to us buck naked, her clothes stolen by a couple of college boys. She asked what we feared most in the world.  I said dying, I guess.  She said, well you’re looking on a woman who has nothing to lose. Witness me. She went up to their big cooler and she took it with her wiry muscles bulging out of her arms and she tipped it over the rock and into the water. Someone turned up the music and we knew it wasn’t over yet.

High up on the ledge the people whoop and holler and throw themselves off thirty, fifty foot cliffs.  Every year someone dies.  Sometimes an international student from a faraway city with no sense of how this place can suck you in and hold you tight.  Sometimes a local kid with more bravery than sense. The cliffs are fenced off now but the determined will still find a way.

When we were in high school in Frankfort, KY, a group of best friends embarked on a canoe/kayak + camp trip down the Green River. And while they did their best to gather for the journey when they could, life continued to happen and make regular trips less frequent and more difficult. The pandemic that swept the globe created even more distance and isolation for us, but once it was safe to be near each other outside, the friends organized a reunion trip in the summer of 2020. It was the first time all four had done the trip together, the first time being together as a group in a year, and was also a celebration of James about to become a father. As we met to pack and prep it was like a time machine was activated, each item stashed or logistic discussed was shrouded in an adolescent giddiness. I awoke before my 7am alarm, too excited to sleep in, only to witness what can only be described as a biblical summer storm that hurled howling winds and a torrential downpour that turned the kayaks on top of Lee’s ’03 VW into sails.

Then, as if by some divine intervention, the clouds parted and the sun shone bright the moment we dropped the boats by the water. This was even more meaningful for me, someone who spent their entire childhood listening to John Prine with their father during one of our countless camping trips across Appalachia and the South, still grappling with his tragic death to COVID-19 a few months prior. Prine had always held a special place in my heart and most meaningful relationships, and had guaranteed an indelible impact on my life long before he succumbed to complications from the disease ravaging the places he loved so much. But Paradise always held its own special place for me, not just literally as a son of a father from Ashland and mother’s family from Russellville, but also as a spiritual homage to a place that gives a yearning of home its meaning. As we paddled down the Green River with our best childhood friends mere miles upriver from Paradise, KY and the old Rochester Dam – stopping to skip rocks from the island beaches, listening to old folk and trash country music and diving into our favorite spot: the Blue Hole in Mammoth Cave National Park – I was reminded of a central truth that John so simply and eloquently sages in Paradise; that home is not just about physical proximity but can transcend time and space, and that it’s worth cultivating, loving, and protecting, before it’s too late.