The religious community needed the money from signing gas leases, but it’s a decision that still divides people today.

On a February evening in 2010, members of a rural Hare Krishna community in West Virginia met in a small-town fire station to formalize an agreement that would fundamentally change the land around them. These followers of the International Society of Krishna Consciousness, a global religious movement with roots in Hinduism, have made their home in the state’s northern panhandle in an unincorporated community called New Vrindaban for more than 50 years. Leaders knew about West Virginia’s history with extractive industries, but it became a reality just a few months before, when an Ohio oil and gas company, AB Resources, approached them about signing a natural gas lease.

The gas drilling boom had taken hold in northern West Virginia and southwestern Pennsylvania and was inching closer to New Vrindaban, which sits atop both the Marcellus and Utica shale formations. By 2009, companies had prepped two dozen wells and sought to drill at 80 other sites on private land within five miles of the community’s most sacred sites, said Gabriel Fried, a Hare Krishna member and former welder who has negotiated the agreements between gas companies and New Vrindaban.

Fried was concerned. Some firms had paid landowners pennies on the dollar for the rights to drill with contracts that failed to address concerns about noise or water pollution, he said.

“It was happening whether we liked it or not,” he said. “So all we could do is try to control it the best we could with better lease language.”

The 19-page contract with AB Resources called for continuous water sampling and testing, designated locations for well pads least likely to impact sacred areas, and pipe casing to be placed deep in the ground, 300 feet below the lowest possible water source, among other demands.

The Hare Krishnas found an unlikely ally in Mark Van Tyne, then vice president of AB Resources. He had negotiated with religious communities before, and as a young man in the mid-1970s, spent several months visiting his sister at a spiritual community in Florida. When the Krishnas asked for certain terms—like limiting truck traffic during major Krishna holidays—he understood the importance of accommodating them. “It was almost like, how could you not agree?” Van Tyne said of their requests. “I knew that we had agreed to things that traditionally most oil and gas companies would not have agreed to.”

At the signing, a sheet cake with white frosting spelled out “Thank you, AB Resources” in blueberries. (The company sold the lease rights to Chevron in 2011.)

Van Tyne said the company would have honored those terms, but “they never came into play” because it didn’t wind up drilling in New Vrindaban. In fact, while gas companies have drilled on neighbors’ plots, extracting some gas laterally from under property owned by the International Society of Krishna Consciousness and its nonprofit agriculture arm, no drilling has occurred directly within the area that includes New Vrindaban’s holiest sites.

In all, the Hare Krishna community has collected roughly $10 million in gas leases from at least nine companies, largely from signing bonuses—money they’ve used to make key repairs, spruce up the grounds, and build more housing and attractions for visitors.

Some members have bristled at the idea of allowing fossil fuel development on land that leaders envisioned as a self-sufficient farm community. But Fried said he believes “it was the right decision still to this day.”

“Major renovation comes from the gas,” added temple president Jaya Krishna Das. “For us, it was definitely a very important source to really move forward.” 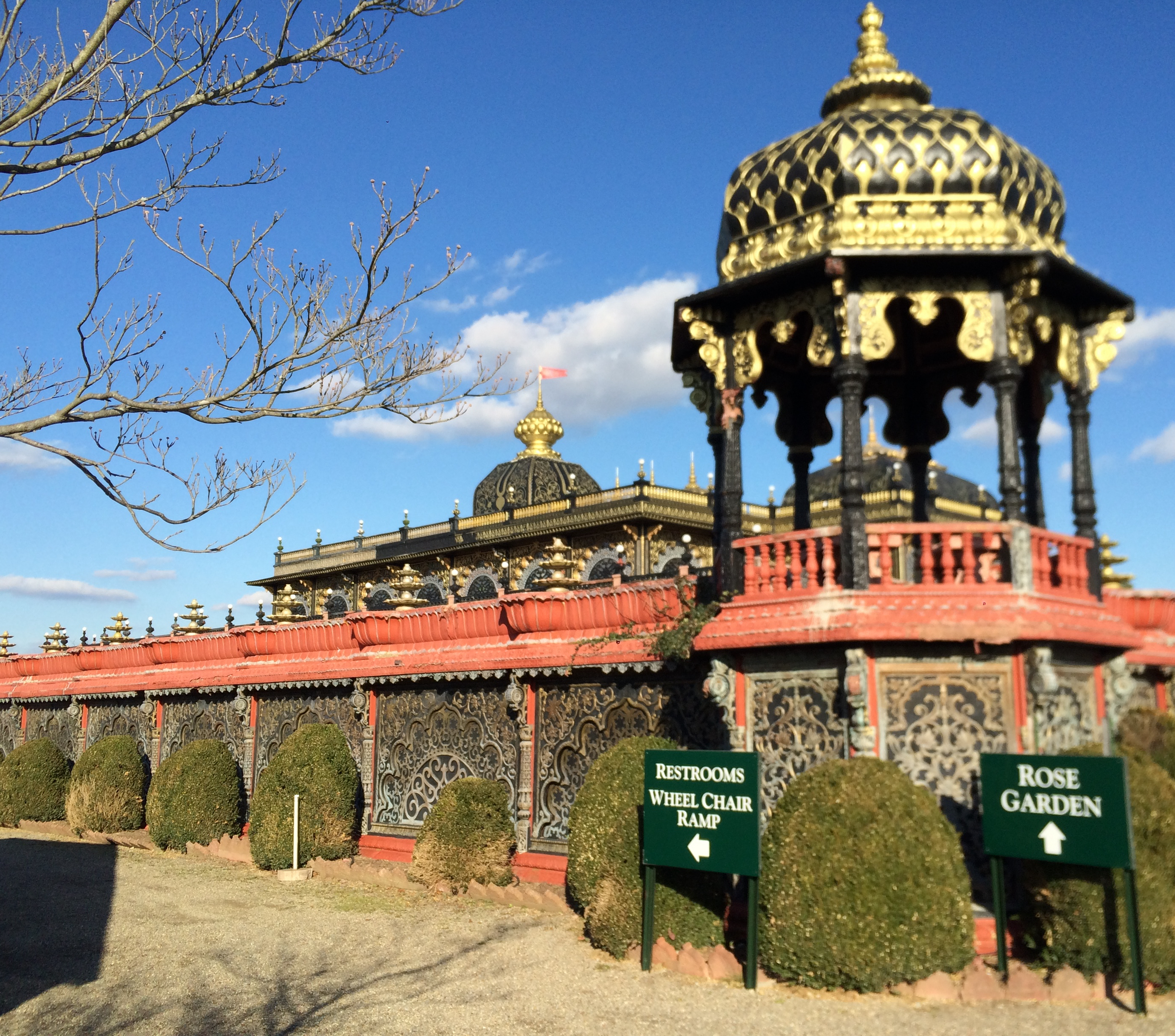 The Palace of Gold, New Vrindaban’s main attraction, was meant to be a country home for Srila Prabhupada but became a memorial after he died in 1977. According to the community, the Palace plan began as “a rough sketch drawn on a scrap of paper.” (Photo by Molly Born)

The International Society of Krishna Consciousness started gaining momentum in 1967, a year after A.C. Bhaktivedanta Swami, whom followers call Srila Prabhupada, arrived in New York City from India to promote the movement in the United States. Two early devotees saw an ad in a San Francisco alternative newspaper offering land in West Virginia for those wishing to create a spiritual community. The Krishnas got a 99-year lease on more than 100 acres and called it New Vrindaban after the holy site in India. The community grew to include hundreds more acres.

Prabhupada’s writings in a 1968 letter provide a glimpse of his vision for New Vrindaban: “They completely depend on nature’s beauty and nature’s protection. . . . Better to live there without modern amenities. But to live a natural healthy life for executing Krishna Consciousness.”

The settlement promoted “plain living and high thinking” and served as a pilgrimage site for followers of the movement as well as a West Virginia tourism destination with its colorfully dressed deities in the temple, a vegetarian restaurant, and peacocks roaming the property. The main attraction is the Palace of Gold, originally envisioned to be a country home for the spiritual leader, which one writer once called the Taj Mahal of Appalachia. The jewel box of stained glass windows, marble and onyx floors, mirrored ceilings, oil paintings, and what the community says is 9 lbs. of gold leafing (thin layers of pure gold) was built by unskilled young followers of the movement.

The Hare Krishnas were familiar sights at airports throughout the 1970s, chanting, dancing, and offering travelers religious literature in exchange for a donation. The practice was lucrative, said the historian Kevin Stewart Rose, a doctoral candidate at the University of Virginia whose research focuses on the intersection of religion and ecology.

New Vrindaban’s “entire history has been marked by constant negotiation and accommodation of” its environs, Rose said: Prabhupada wanted a self-sustaining community, but the members had to raise outside funds to build the Palace of Gold and attractions to accommodate visitors. Early on followers eschewed modern amenities to live in harmony with the environment. Eventually, luxuries like cars and cell phones were accepted, and leaders allowed more people to wear street clothes and own nearby land, rather than live in the on-site ashram, akin to a monastery.

Longtime members recall the early days with fondness. Fried remembers shivering in a sleeping bag next to his wife on the floor of an uninsulated trailer. “There was such an intense camaraderie and love,” he said in a 2019 interview. “Just like in any other situation, people who go to war together, and they go through an intense experience and they have the austerity of going through battle. They’re bonded—they’re bonded for life.”

After years of growth—the community drew a half-million visitors between 1983 and 1985— New Vrindaban entered a period that temple president Das calls “the troubles.” After Srila Prabhupada died in 1977, multiple scandals led to federal law enforcement investigations and New Vrindaban’s excommunication from the international governing body. (It was later reinstated.) A young assistant to the community’s leader, Kirtanananda Swami, accused him of sexual assault, and then a follower who had documented the abuse and other allegations was killed in a plan prosecutors said Kirtanananda orchestrated. He was later convicted of racketeering. He died in 2011 in India.

Amid the fallout, almost 250 members left New Vrindaban between the mid-80s and early 90s. The movement as a whole faltered in the decade after Prabhupada’s death, according to Rose, “helping create the difficult financial situation that made the sale of fracking rights feel like the only option for a community struggling to sustain itself in the hills of West Virginia.” Further, he continued, “the potential royalties looked like a major lifeline” for its future.

However, Prabhupada himself felt strongly about the possibility of extraction in the area: “If in our vicinity some such industry (coal or oil industry) is started, the whole idea of Vrindaban will fade away. … Industrial development (or mining industry) in the neighboring places will mar the whole idea,” he wrote in a letter that Rose unearthed in a 2020 American Quarterly article. 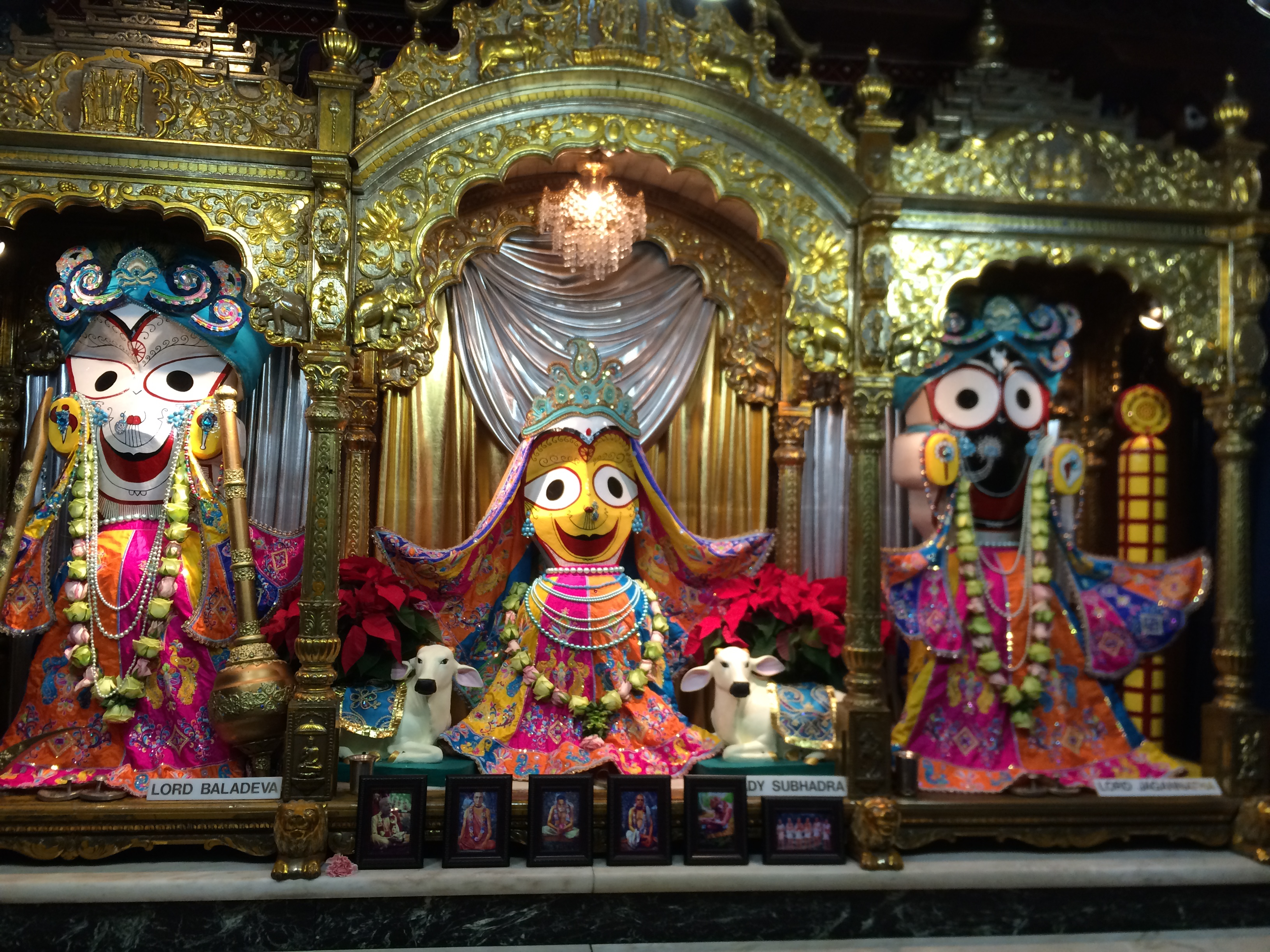 These deities are among those worshipped in Hindu religious practices. (Photo by Molly Born)

A founding principle of Krishna movement says that everything belongs to the Lord. At a 2017 conference in Nashville, Fried explained the community’s rationale for gas drilling: “The Lord’s energy, if properly used, purifies the activity and results in positive spiritual advancement.” New Vrindaban was “forced to examine our own dependence on fossil fuels and be honest about the reasons for our decision.”

For some of the faithful, the issue of drilling has remained divisive. From her post at the welcome center in New Vrindaban, Lilasuka Hanson has seen trucks barrel by over the years, prepping well pads and kicking up dust. Hanson, who relocated with her husband in 1980 from a Krishna community in Toronto, longs for the early years when she said the community felt more in line with the founder’s original vision.

“It is much harder to live here, you know it really took a big toll,” she said in a 2019 interview. This is a place of nature and people are connected to the Earth and to farming.… Everybody’s very, very torn up about it.”

“I still don’t agree with the fact that they did [it]—a lot of us don’t,” Hanson said recently, but “you make the best of it.”

The community’s interaction with extractive forces are likely to continue. Though the Marcellus leases have expired, Fried said, the Utica ones remain active. In 2017, members sued Energy Transfer Partners, and a court agreement forced the company to reroute its Rover pipeline away from the community’s most sacred sites. Fried has worked to get mine companies to do the same.

After limiting events and visitation during the pandemic, Instagram posts show the community’s lineup of summer activities as the Palace of Gold restoration project continues. Reflecting on the gas development, Jaya Krishna Das, the temple president, said that over time he “came to the conclusion that actually it’s a gift of Krishna.

“It’s maybe the one reason why New Vrindaban was created in this place.”

Molly Born is Southerly’s Central Appalachia correspondent. She co-produced an episode about this story in 2019 for podcast Sacred and Profane.