Billions of Brood X cicadas are above ground for the first time in 17 years. After a year of loss, distance, and personal grief, it feels especially symbolic.

The first time I saw a cicada, I wanted to eat it. I was 10, and well into my second summer in North Carolina after moving there from the Midwest. I had spent the day ripping holes in my denim shorts and playing in sprinklers with the neighborhood kids, and was walking home, barefoot and tired. It looked like a piece of candy. Before I could take a bite, it crumbled between my fingertips with a satisfying crunch. I looked up, and in the light of the setting sun, I saw dozens more, scattered like confetti on all the nearby trees.

I ran home and immediately asked my dad what these strange things were. We were one of those families that had encyclopedias lining our bookshelves, so I was told to lug down the “C” volume and open it to “cicadas.” The Encyclopedia Britannica told me cicadas were sound-producing insects ranging from 0.8 to 2 inches with two pairs of membranous wings, prominent compound eyes, and three simple eyes (ocelli). So these little shells were clearly not candies — but they were, apparently, edible.

As I began reading more in-depth about these bugs that left their skeletons behind in my neighborhood as if it were the biblical version of the rapture, I was enthralled. But it was hard to wrap my mind around their lifecycle. Each cicada brood buries underground and emerges at different times when environmental cues, such as changes in the soil temperature, alert their internal molecular clock. 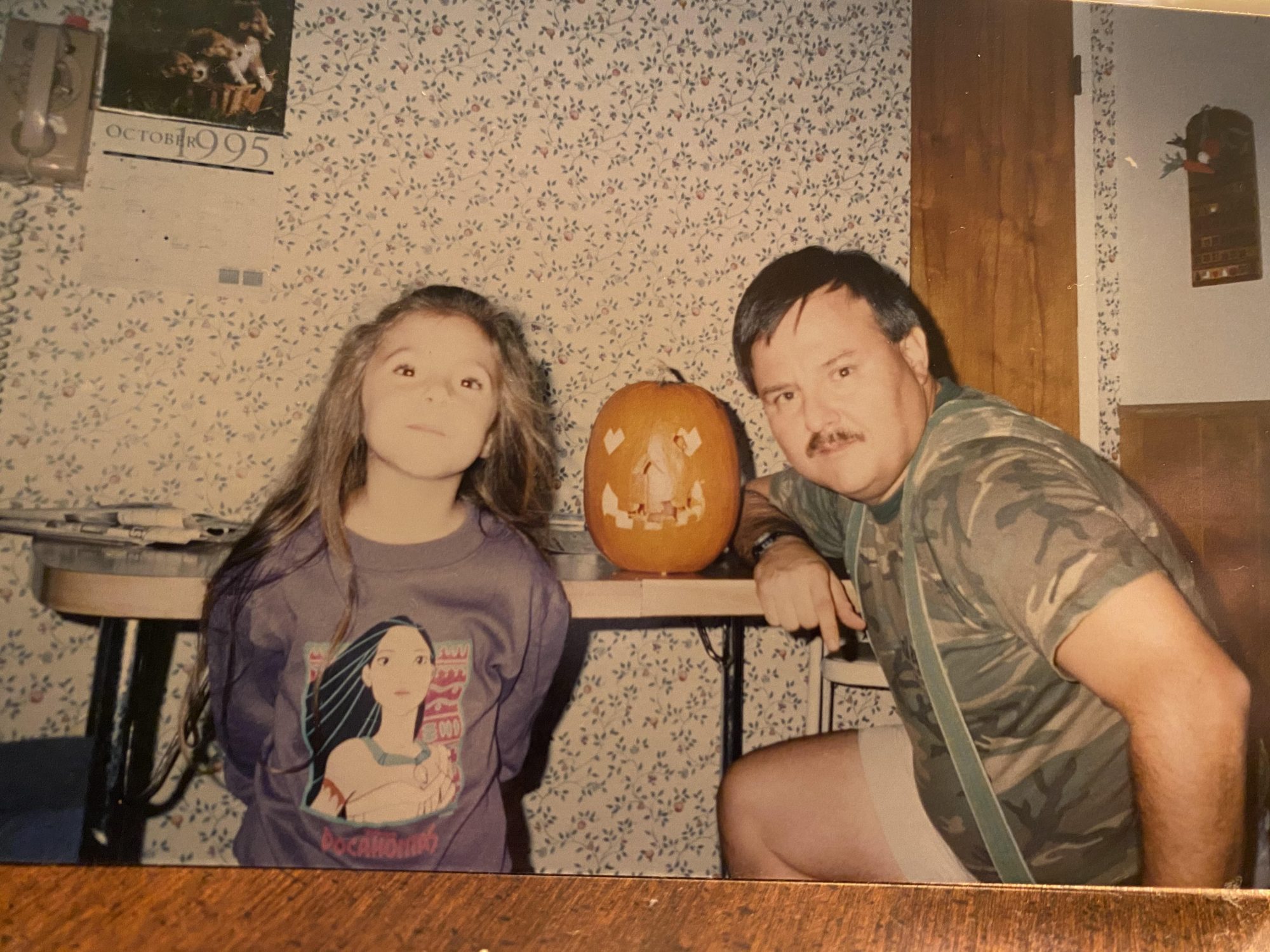 The author and her father. Photo courtesy Jordan Hernandez

Brood X is currently emerging all over the Midwest, Northeast, and Southern regions, including in Tennessee, North Carolina, Virginia, and northern Georgia, and is one of 15 broods of periodical cicadas — groups that emerge from the ground on the same time cycle — in the U.S. Twelve of those broods operate on 17-year cycles and the other three poke their heads above ground every 13 years by the millions or billions. They stick around for just a few weeks before they disappear again.

What I didn’t realize growing up reading the encyclopedia was how much bugs in the South, especially cicadas and fireflies, would mean to me once I left. Once, a friend told me she found them to be amongst the worst parts of living in the region. I stewed on her comment for hours, because this felt like an insult to the parts of the South that hold us and remind us of who we are. Sure, cicadas are loud: Their consistent, shrill buzzing noise that sounds at once like electrical wires being pressed together and also the screech signaling impending doom in a horror movie. Not to mention, cicadas’ songs can reach up to 100 decibels, which is the same level as jet takeoffs, lawn mowers, tractors, and jackhammers.

But that music was the nightly soundtrack to my childhood. I would open my windows while doing my homework so I could have background noise, and found myself missing their hum during the winter months. When I moved to Oregon almost eight years ago, I started calling home often, asking my mom to take the phone outside so I could hear the cicadas. During those years, I was speaking to my dad less and less. Those calls served as sonic care packages when I was feeling homesick, transporting me from my couch across the country to the barefoot North Carolina summer when he introduced me to the bugs I’ve come to love. Insect ASMR at its finest.

We asked readers to submit reflections and memories of fireflies, cicadas, and other summer insects. Read them here.

Cicadas aren’t just a soundtrack; they also help aerate the soil and prune trees. Once they die, their bodies provide a source of nitrogen for currently growing trees. They’re also useful for tracking the effects of our warming planet: Broods of cicadas don’t emerge from the soil until it reaches 64 degrees, which has been happening increasingly earlier in the spring. Some experts say cicadas are promising bioindicators of climate change, and warmer weather could be contributing to cicadas emerging up to four years ahead of their 17-year cycle.

These creatures also teach us a lot about mortality. I remember when my dad kindly reminded me that I needed to release one I had captured in a jar to “study” because it wasn’t a viable pet. Cicadas don’t stick around long: Brood X will only be among us for about four to six weeks. They’ll be solely dedicated to creating future generations before they die off.

In the coming days and weeks, I’ll be asking my mom to dial me into their evening symphony. This year, I expect the sounds to feel more solemn than usual. It’ll be the first cicada swarm without my dad, who passed away a couple weeks before Christmas last year. As Brood X emerges, complicated emotions will as well — my attachment to cicadas will be forever entwined with my loving childhood memories of my dad, no matter how complicated things got with us later on in life.

Brood X is symbolic of the past year we’ve all had. In a sense we’ve all been forced underground during the COVID-19 pandemic. We’ve spent the last year or more retreating, away from the rest of the world. This summer, we can start gathering safely at last, with experts anticipating we’ll soon be swarming the streets and the bars akin to the roaring 1920s. While we may have hard shells as we readjust to socializing, we are still fragile, grieving so much collective loss.

No matter how you feel about cicadas, we’ll soon meet swarms of them who spend their lives singing and preparing for posterity. Particularly after a year devoid of much joy or delight or connection, I’m eager to call up my mom to hear their song, to imagine how to pay love forward in the way that my dad did for me on that summer evening when I cracked open the “C” encyclopedia.

Jordan Hernandez is a Portland-based writer and former Southerner. She has been a freelance writer for over a decade, and regularly writes and contributes to various publications both in print and online.