As 2020 population and migration data is slowly released, news outlets, policymakers, and researchers are trying to make sense of how the COVID-19 pandemic impacted where and how we live. U.S. Postal Service change-of-address requests and Census Bureau data shows slight shifts out of coastal cities into smaller metros as newly remote workers had the freedom to move where they pleased. But most of the analyses by national outlets have missed a major story: According to the USPS data, Lake Charles, La. — a city hit by back-to-back hurricanes during the most severe Atlantic hurricane season on record — tops the list for out-migration between 2019 and 2020 out of 926 metro areas surveyed.

It’s glaring evidence of a disaster, worsened by climate change, that displaced thousands of people. Southwest Louisiana has been through a lot in the last year: in addition to four federally-declared disasters, it was also a COVID-19 hotspot in July. Hurricane Laura ripped through the region with 150-mph winds in late August, tearing off roofs and knocking out power. Hurricane Delta brought torrential rains in early October. In February, Winter Storm Viola brought snow and freezing temperatures that busted pipes and cut off water service.

Because so little information is available about the scale of displacement in Lake Charles and the surrounding region, the USPS data serves as a useful yardstick. It puts a number on the countless anecdotes I’ve heard reporting on storm recovery: stories about advocates trying to reach displaced voters ahead of the presidential election, scattered across the state and beyond; stories about teachers calling the families of their students, attempting to figure out where they are; stories about renters who got evicted from their apartments, now sleeping in their cars with their kids or packed into mobile homes with relatives.

But national coverage of these trends left out this critical context: A New York Times Upshot piece from April 19 did not initially refer to Lake Charles or the hurricanes that devastated the city in August and October of last year. The same is true of Bloomberg CityLab’s analysis. The Atlantic’s Weekly Planet newsletter noted that the swath of people moving from Lake Charles was caused by the decline in oil prices last year, rather than by the hurricanes.

This neglect — and misinterpretation — is the culmination of eight months of underinvestment and underreporting on this crisis in southwest Louisiana. Lake Charles residents commented on the Upshot story, calling out the paper’s lack of coverage. “Most of America has forgotten us and multitudes of families are still living elsewhere while waiting for insurance companies to pay for home repairs. I am one of those people,” one wrote.

Another person wrote it’s no surprise that the public doesn’t know about the hurricanes in Lake Charles, because the storms “garnered about 6 hours of national media attention.” A third said, “Seeing our beloved city on the top of a list that reflects negatively and gives no explanation is, quite frankly, a slap in our faces.”

Between Monday, April 26 and Tuesday, April 27, the Times updated the story to include a single line about the hurricanes in Lake Charles — though it did not issue a correction or an update on the site to signal the change. 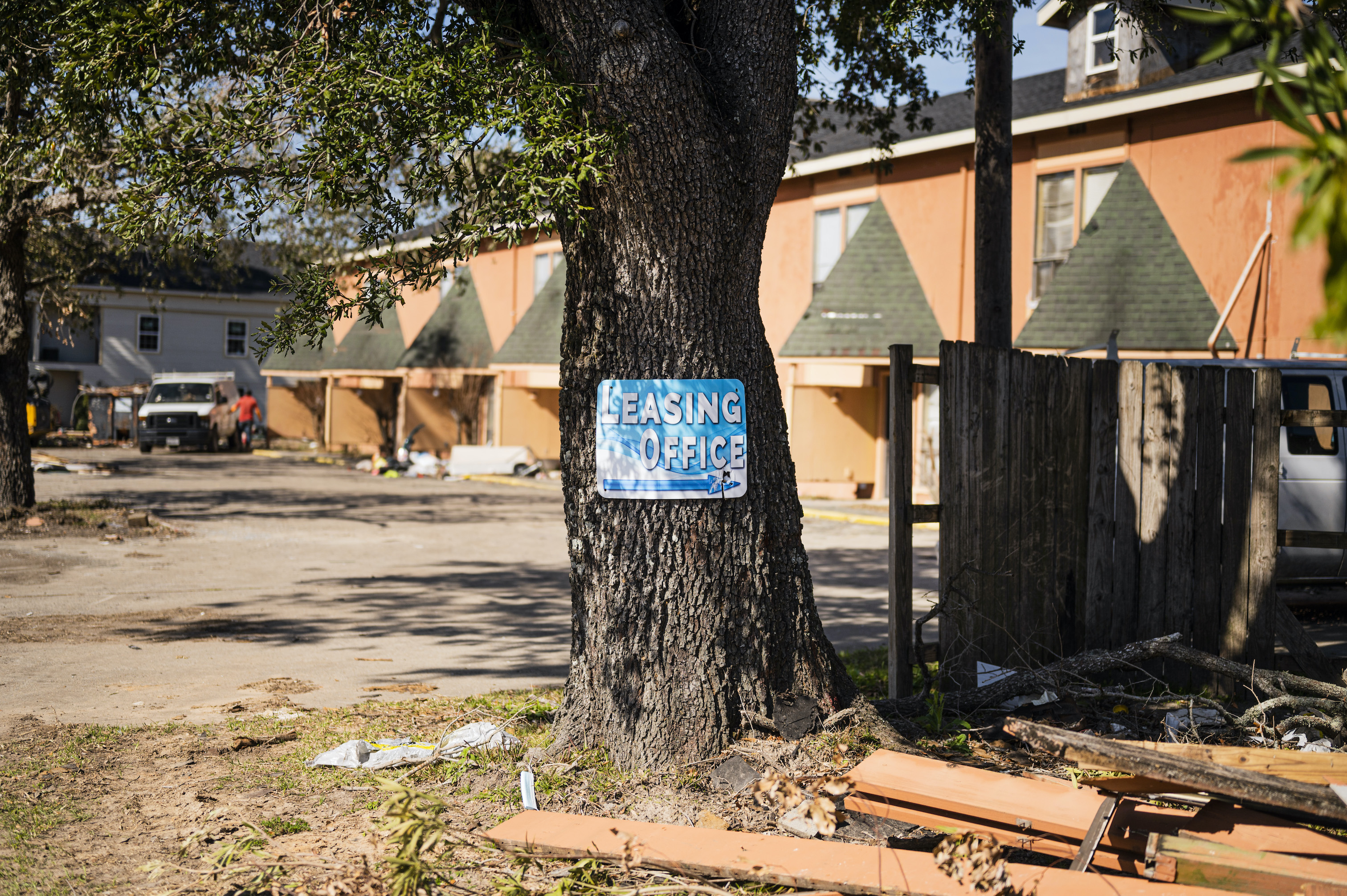 Rental prices have skyrocketed since the hurricanes, according to Lake Charles residents. Photo by Katie Sikora

As the nation pores over the first wave of 2020 census data — which helps determine everything from congressional representation to the amount of federal funding that will stream into states and localities — it’s unlikely that Lake Charles’ population will be appropriately accounted for.

The storms and the pandemic exacerbated a pre-existing housing crisis in the region. Mass evictions and a slow-trickle of federal aid have left some renters unhoused since August, as I reported in February. The hurricanes together damaged about half of the housing stock in Calcasieu Parish, where Lake Charles is, squeezing the market and incentivizing landlords to raise rents. At one point last fall, the state of Louisiana housed 18,000 Hurricane Laura evacuees in hotels and shelters across the state. That number has since dwindled as the state has phased out the program, but thousands of other people have been living in hotels or staying  elsewhere. Many residents have needed to move multiple times in the last 8 months, as Lake Charles remains in a state of disrepair.

Residents and officials have emphasized the challenges they face in understanding the scope of this out-migration. Calcasieu Parish officials opted out of an annual count of unhoused people this year citing risk of COVID-19 and lack of staffing capacity. State and federal agencies have yet to release public records on who has received or been denied housing assistance.

The census is meant to represent a snapshot of where people were living on April 1, 2020. But after Hurricane Laura, the in-person census count in the Lake Charles area was shut down for five weeks. The Census Bureau tracked down evacuees using lists provided by state shelters, according to a press briefing in October. Census workers had about three days to count on the ground before Hurricane Delta shut down their operation again.

Louisiana had the lowest census response rate of any state last year — it was the only state that did not reach a 99.9% response rate. When asked why this was the case during the briefing, Albert Fontenot, associate director for Decennial Census Programs at the Census Bureau, said that “Laura and Delta could be described as the primary reasons Louisiana was in last place.”

This has happened before in Louisiana. After Katrina, the Census Bureau’s yearly estimates weren’t capturing the repopulation of New Orleans. Plyer, an expert on disaster recovery trends, spearheaded the city’s effort to challenge these estimates by tracking metrics including changes in public school enrollment, the number of households actively receiving mail and electricity, and rental leases.

The bureau revised its estimated population of New Orleans by nearly 50,000 people in 2007, and 25,000 people in 2008. When it counted residents in 2010, the projected estimates were within 6% of the actual count; had the bureau not revised their estimates, they would’ve been 22% too low.

Having an accurate population count is critical, according to Plyer — it can impact planning decisions about schools, roads, and other essential infrastructure, and can influence future economic development. Without these numbers, Lake Charles can’t fully recover.

“Population estimates after a disaster influence greatly how businesses perceive a community and whether they should reinvest in it,” Plyer said.