In a county with high rates of food insecurity, longtime residents are working to fill the gaps.

For nearly three decades, William Dean and his wife Vivian have operated a grocery store in their predominantly Black neighborhood of Pensacola, Fla. Magee Field Grocery store offers residents access to fresh fruits and vegetables they would otherwise have to commute miles to find, and accepts food stamps as a payment option.

People rave about the quaint store’s deli and friendly customer service from the Deans, who’ve been married for 30 years. “We have it all,” said William, who is Black. Vivian is Filipino American. “All meats, canned goods, we have a little of everything. I have people come in and purchase anywhere from $100 to $200 worth of groceries. You can get a very good meal out of here.”

Pensacola is nestled in the westernmost corner of the Florida panhandle, right on the Gulf of Mexico. Many researchers argue that the city is the oldest Spanish settlement in the country, and one of its nicknames is “The City of Five Flags” — since 1559, the Spanish, French, British, Confederate, and U.S. flags have flown above it. It’s home to award-winning beaches and historical landmarks.

But there’s also stark economic divides: The city is 28% Black and has high poverty. As of 2017, nearly one in every six Pensacola residents lived in poverty, and that number remains about as high in 2021. In 2018, over 42,000 people in Escambia County reported they were food insecure, according to the nonprofit Feeding America.

Nationwide, even before the COVID-19 pandemic, food insecurity rates within Black communities were consistently higher than in white communities. Food inaccessibility can contribute to a higher probability of health issues such as diabetes and heart disease, according to a 2017 study. Federal programs such as the Supplemental Nutrition Assistance Program (SNAP) and the National School Lunch Program (NSLP) are helpful, but not sufficient in eradicating these disparities. According to data from the USDA Food and Nutrition Service, the SNAP program saw a 51% increase in the amount of benefits provided across the country from March to April 2020.

The Deans are just one example of grocers who have become integral for food accessibility in the city’s communities of color.

In January, Marni Woodson opened Busy Bee Mercantile & General Store in District 5 of the city, which was majority Black just nine years ago. It’s now about 44% Black, since more white residents have moved to west and downtown Pensacola. Woodson also owns Asher & Bee Apothecary, a nearby teahouse that sells tinctures, teas, honey, and more. Woodson said she believes in the power and importance of food, and wants to make it accessible for her neighbors.

“Food insecurity has always been high in minority communities,” Woodson said. “District 5 is considered a food desert and is home to a dense population of African Amerians. I believe in food as medicine, and in District 5 there aren’t many affordable, accessible, and nutritious food options; and since I work in this district, it just made sense.”

The Busy Bee Mercantile — its name derived from a nickname Woodson has for her daughter — sells fresh produce, groceries, and hot meals. Popular favorites among customers are Taco Tuesday and fresh made soups and salads. The business offers plant-based options and Woodson uses Facebook to educate people on the health and nutrition benefits of the meals she offers.

Woodson said the affordability is what makes her shop stand out. She compares her prices for vegan items and produce to prices at Whole Foods, which are generally 10% to 20%  higher than other grocery stores. Since being acquired by Amazon, the company has reduced costs some, but it is still inaccessible for many people.

“Our food is affordable,” Woodson said. “We offer fresh produce like fruits and vegetables, staples like flour and raw sugar, specialty items like wild mushrooms and we have a healthier food cafe in our store.” 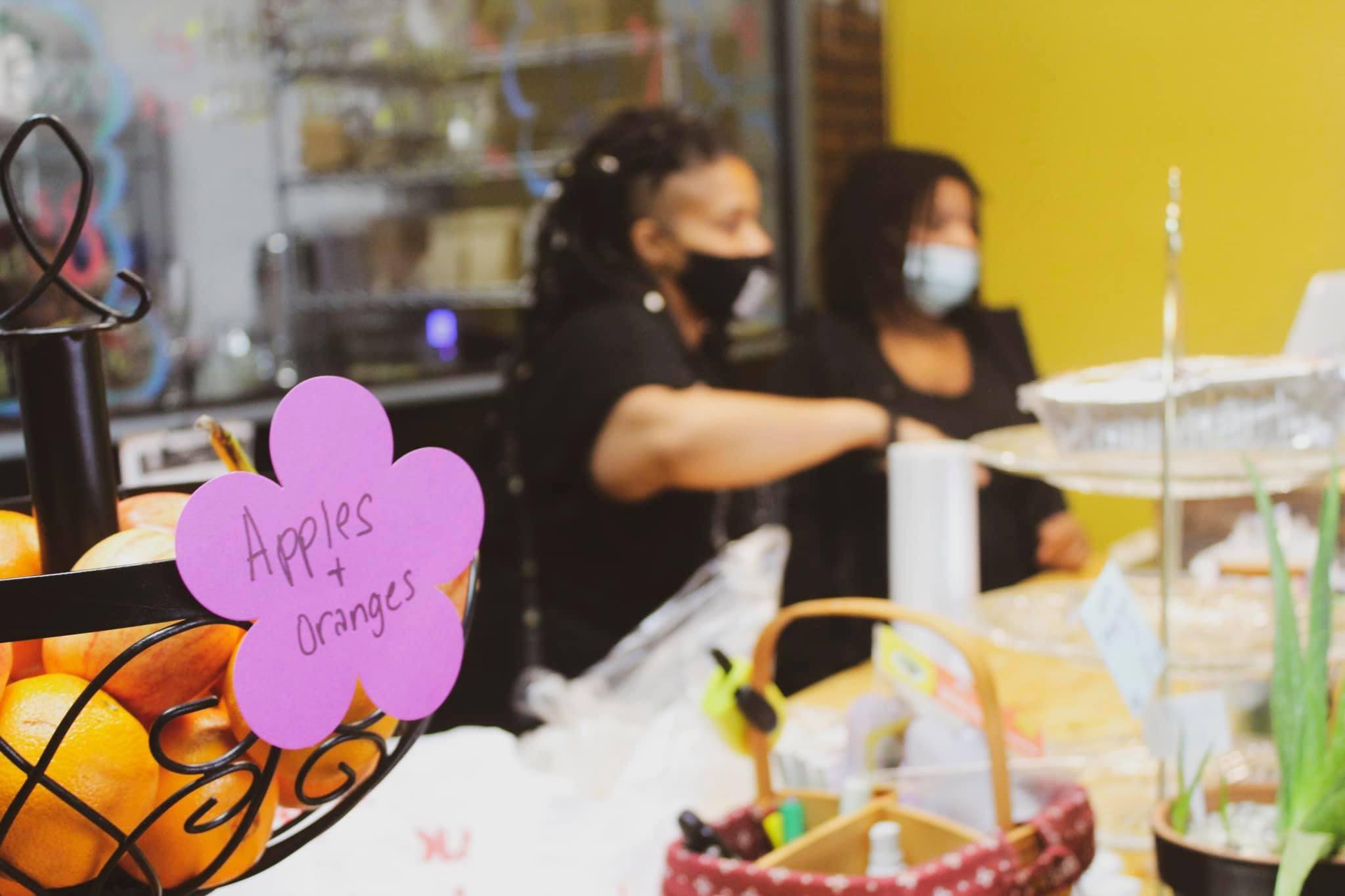 The Busy Bee Mercantile — its name came from a nickname Woodson has for her daughter — sells fresh produce, groceries, and hot meals. Photo courtesy Marni Woodson

Teniadé Broughton is a seventh-generation Pensacolian and was elected in 2020 as council member to represent District 5. Broughton’s family has lived there since the 1970s, and she has memories of spending time in the neighborhood of Woodland Heights, playing with friends and spending time with loved ones. Now she’s strategizing community development and supporting efforts for food accessibility in the district. Woodland Heights, where Busy Bee is, was hit hard by Hurricane Sally in September 2020. It caused major flooding, damaged trees, and extended power outages, leaving people without food or resources.

Broughton said she is glad Busy Bee’s location provides more options to residents — the only other substantial options for grocery shopping are two Publix supermarkets at the northern and southern end of the district. In the area surrounding Busy Bee, there are multiple low-income census tracts at least half a mile to a mile from a supermarket, and more than 100 households in the area have no access to a vehicle.

The Escambia County Area Transit (ECAT) is the main public transportation system in the area. With modified schedules and passenger limits during the pandemic, commuters faced challenges in getting around. “I recognize that not everyone has cars and our transportation system isn’t the best right now,” Broughton said.

Broughton added that she appreciates the entrepreneurial efforts in the community and hopes to use her platform as a councilwoman to elevate their work. “We want to encourage more people to establish businesses and opportunities to address any issues related to food insecurity,” she said. “We’re also having conversations about introducing community gardens in our district.”

Sierra Lyons is a senior broadcast journalism student at Florida A&M University and a multimedia journalist covering race, religion, and politics. You can connect with her on Instagram @sierra_elisabeth_  or Twitter: @sierra_298.