Before it took over Southern landscapes, the invasive vine was once called the “savior of the South.” Artists, designers, and chefs are trying to render it useful.

Slithering and snaking skyward, wrapped around the trunks of ancient oak trees, up telephone poles, and over hillsides, kudzu’s bristly, yellow-green vines and heart-shaped leaves look innocuous enough. To an untrained eye, they could be mistaken for a colony of Greenbriar or common ivy. But kudzu stands apart from its leafy counterparts in its relentlessness, with popular poetry and fiction referencing the mythical, all-encompassing destruction it brings.

Kudzu is infamous in the Southeast, where it covers an estimated 7.4 million acres. The invasive species has a reputation of being aggressively damaging to biodiversity, economies, and ecosystems. After decades of being a thorn in the side of U.S. cities, rural towns, as well as the agriculture, lumber and forest product industries, kudzu’s uses are expanding — now including building materials, cooking, healing, climate action, and even cultural advocacy.

Kudzu was initially introduced to the U.S. at the 1876 World Fair in Philadelphia. Native to Japan, it was heralded as a decorative vine that could be used to shade a home. That positive perception carried on through 1935, when it was first widely planted in the U.S. as a way to mitigate natural soil erosion. The “Big Kudzu Push” meant that millions of kudzu seedlings were planted and grown across the nation over decades; the Kudzu Club of America concentrated its efforts in the South, setting lofty goals that included planting eight million acres. As people moved from rural to urban areas and abandoned farmland, the vine grew unchecked.

“‘Now it’s, ‘The vine that ate the South.’ But if you look at what people were saying [about kudzu] in the 30s, and the 40s, they called it the ‘Savior of the South,”’ said Justin Holt, co-founder of Kudzu Culture, an organization that hosts workshops on how to harvest and use kudzu in art, cooking, textiles and holistic medicine.

The USDA removed the vine from its list of plants permissible under the Agricultural Conservation Program in 1953, and named it a common weed in 1970. With the ability to grow anywhere, up to a foot per day and sixty feet during the growing season, kudzu uses its vines to choke out trees and other plants. It can impact not just the soil where it invades, but the nitrogen cycle of air around it. Studies have shown that it affects atmospheric chemistry on a larger scale, too — even contributing to surface ozone pollution. Rising temperatures driven by climate change mean longer growing seasons, a warming climate, and plenty of rainfall — all ripe conditions for its spread.

It’s also harmful to local economies: Paulina Harron, an environmental scientist at engineering firm AECOM, led a 2020 study with Oklahoma State University showing that over the next five years, kudzu’s spread in Oklahoma could result in a loss of $167.9 million and impact up to 780 jobs in the forest product industry. Kudzu is already costing the forest product industry $500 per hectare per year to control the infestation.

“I think these economic impacts definitely serve as an incentive for governments, at different levels, to look into control strategies,” Harron said. The key to managing kudzu is early detection and rapid response, she added. It can be done by eradicating small kudzu populations and aggressive management procedures used on larger infestations.

In lieu of policies to control the spread of the invasive plant, artists, chefs, and designers are finding creative ways to harvest and repurpose the plant. When Katie MacDonald and Kyle Schumann were associate professors at the University of Tennessee in 2020, the leafy vine was everywhere. “It’s hard to avoid it, and you see it blanketing just about everything. It becomes a real presence in the landscape,” MacDonald said. “Kudzu is kind of the poster child of invasive plant species.”

As designers, they saw this overabundance as a possibility. “To us there seems to be an opportunity space where we might be able to incentivize something that’s good for the environment, like remediation, by making it a useful act of building material,” MacDonald said.

The two founded design firm After Architecture in 2012 and started building a supply chain of building materials from invasive plants like kudzu.The stems of kudzu are a hard fibrous material, which they say makes it tough, flexible, and easy to build with. MacDonald and Schumann hope the building industry can one day replace carbon-intensive building materials such as concrete, steel, and aluminum, with materials like invasive species.

“In specifically targeting kudzu as one of the species to use, we’re trying to question preconceptions about what architecture is or what architectural materials could be,” said Schumann.

Building and construction make up nearly 40% of global carbon emissions and one third of global energy use have been attributed to building and construction. “We’re interested in how the materials we work with engage the efforts to mitigate climate change,” said MacDonald. “Proving out a productive use for kudzu in the built environment could transform it into a resource and incentivize its harvesting and the subsequent restoration of native ecosystems.”

Two hours away in Asheville, more community-driven projects to make kudzu useful are in the works. Ten years ago, Holt and Zev Friedman were running a project to grow a garden on an abandoned lot overrun with kudzu, which required they dig the soil to remove the roots. They were surprised when they realized the soil was rich and nutrient-dense. They soon launched Kudzu Culture, and started hosting events where they educate those interested in the plant’s utility. These have grown into a regular affair, usually attracting two dozen locals to biannual workshops; they also host an annual Kudzu Root Camp, which teaches people how to use the invasive plant in food and medicine, on Friedman’s parents’ kudzu-covered land in western North Carolina. The team also sells the vine to local kombucha companies. Their ultimate goal is to build a kudzu-based products line in the Southeast. 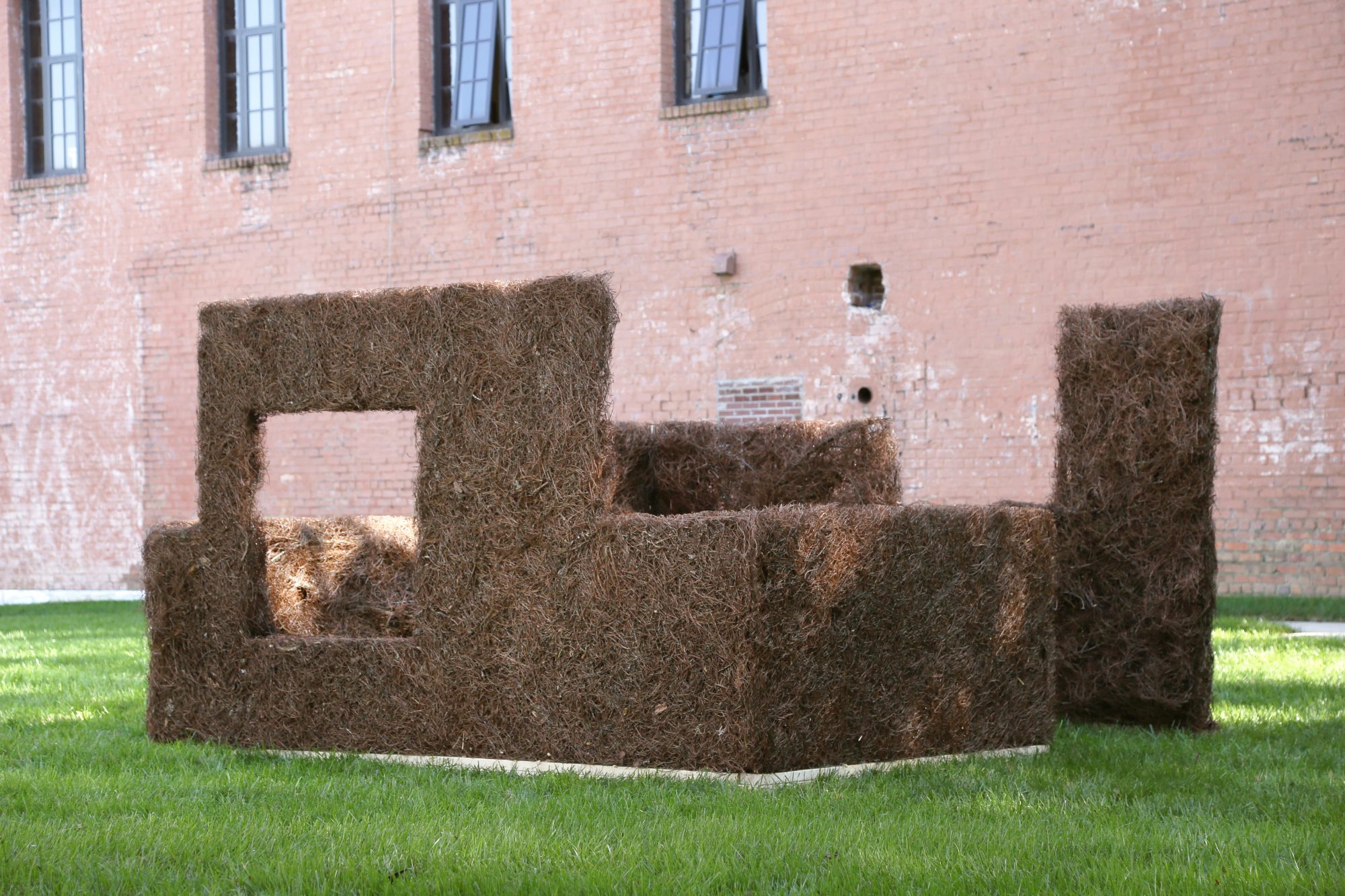 An inhabitable installation made of kudzu at Knoxville Museum of Art in 2020. Photo courtesy Katie MacDonald and Kyle Schumann

Another quickly expanding market for kudzu is in restaurants: Fried kudzu chips, kudzu sorbet, kudzu tea, and kudzu chicken soup are on the menu. Conservation biologist Joe Roman is the founder of Eat the Invaders, a website that shares kudzu recipes, among others, encouraging readers to take the fight to reduce invasive species to the kitchen. His interest in eating invasive species was born out of a conservation biologist’s desire to protect and preserve the planet.

“Kudzu actually lends flavor. It’s the flavor enhancer,” said Roman. The root is reminiscent of a grape-scented flower, he said, and is used to make jams, syrups and the like, especially in countries like Japan, where the vine is native. In the U.S., however, you’re a lot less likely to come across it on a menu.

Some restaurants are starting to experiment, though. The chips are a staple at a coastal-themed Macon, Georgia restaurant called Kudzu Seafood Company, founded by Lee Clack and Kelley Wrigley six years ago. The collection of plants, berries, and nuts has been around as a source of survival since as long as humans have. But a 2017 John Hopkins study found that foraging in urban cities is becoming more popular because of the human need to connect with nature.

“I think it’s because people are more aware that they can go out and eat all these incredible products made from these incredible species, whether it’s plants or animals out there, and that has really changed in the past five years,” said Roman.

Roman has a go-to kudzu sorbet recipe — shared with him by Tennessee chef Jose Gutierrez — which mixes kudzu blossoms with white wine, licorice root, cayenne pepper, sugar and water to produce the dish. Of course, cooking kudzu and other invasive plants can’t solve the problem. “Eating a couple of kudzu blossoms is fun, and it tastes good,” Roman said. “And I hope it will expand awareness.”

Harron, the researcher who led the study on the plant’s economic impact, said that these are important steps towards the bigger goal of increasing the public’s knowledge of and participation in invasive species management. “Alone, eating kudzu is not going to solve the infestation problem or halt their spread — there is simply way too much kudzu already established in many ecosystems,” she said. “But I do think that using a combination of management methods is useful in controlling their populations.”