Without advance warning about the true scale of power outages and the risks of carbon monoxide poisoning, local officials say they were caught off guard, leaving residents to fend for themselves.

This story was published in partnership with the Texas Observer.

By Carly Berlin and Amal Ahmed

Sheletta Brundidge watched from Cottage Grove, Minn., as severe winter weather descended on her hometown of Houston in February. She worried that snow and ice could shut down power for days, and that temperatures could plummet, leaving Texans freezing in their homes. “I knew they weren’t ready for this,” she said. She pictured people using generators or running their cars in garages to stay warm, putting them at risk for carbon monoxide poisoning.

Brundidge lost five family members to carbon monoxide poisoning after Hurricane Laura devastated Lake Charles, La. last August. Her aunt, two uncles, and two cousins weathered the Category 4 hurricane in one of their homes, but with power shut off during a major heat wave, they ran a generator in the garage to produce electricity. A gust of wind closed the garage door while they were asleep, sending the noxious fumes into the house.

Carbon monoxide, a colorless, odorless gas, is particularly dangerous because it has no taste or smell. According to the CDC, symptoms are “flu-like,” including headache, dizziness, weakness, upset stomach, vomiting, and chest pain. Breathing in a lot of the gas can cause a person to pass out or die.

As temperatures dropped to record lows in the single digits, and power went down for hours if not days, millions of Texans were largely left to fend for themselves as they figured out how to stay warm. The storm stretched into Louisiana and Mississippi, where aging and failing infrastructure led to water outages lasting into March.

A Texas Observer and Southerly analysis examined emergency alerts and social media posts of Texas’ 9 most populous counties on the ERCOT grid. A few days before the storm hit on Feb.14, officials began warning residents about icy roads and the potential for burst pipes.. They advised people to dress in multiple layers if they had to go outside, and bring their pets and plants indoors. But the warnings about carbon monoxide poisoning or hypothermia risks were buried in email alerts sent to subscribers; the messaging wasn’t consistent across platforms either. A graphic about fire safety might have been posted to a city’s social media page, but not the county’s emergency management page.

County emergency managers, who are tasked with preparing for and responding to local disasters, say that they received little information from Texas agencies — the Public Utilities Commission, the governor’s office, or the Texas Department of Emergency Management (TDEM) —  about the risk of prolonged power failures from the freeze, which ultimately led to individuals using generators, running cars, or lighting barbecue pits in their homes in desperate attempts to get warm.

City and county officials “were caught extremely flat-footed,” says Bexar County Commissioner Trish DeBerry. “If there was guidance that came down from the state, I was not aware of it.” When the power went out, and the water systems started to fail, DeBerry says that county emergency management staff simply had to react to each new threat as it developed. “When it hit the fan, the only strategy we had was hope that it was going to get better. There was no strategy in place to counter it — in a crisis situation, hope is not a strategy.”

By the end of that week, counties reported dozens of deaths from hypothermia, house fires, carbon monoxide poisonings and other causes. In Harris County, the Houston Chronicle reported that more than 40 people died, making Winter Storm Uri more deadly than Hurricane Harvey in 2017. The number continues to rise as medical examiners confirm and certify cause of death. The Texas Department of State Health Services told NPR  that there had been 450 calls related to carbon monoxide poisoning to the state’s poison center by the Thursday of the storm.

Texas and Louisiana are both accustomed to disaster: From droughts and floods to hurricanes, tornadoes and hail storms — as well as oil spills and chemical releases — almost every county and parish has seen its fair share of emergencies. Each summer, heat waves increase the risk of dehydration and exhaustion for millions of Texans and Louisianans. But in a region with relatively mild winters, it’s hard to plan for a snow storm.

“We don’t appreciate the impact of cold weather in Texas,” says Garret Sansom, a professor at the Texas A&M School of Public Health who researches disaster preparedness. “If you live in an area where it can get this cold, it might be pretty obvious— but it’s not something we have as part of our culture.”

It can be difficult to communicate the individual risks of an unfamiliar event, and to motivate households to buy extra blankets, food and water, or read the manual on a generator, a week ahead of snowfall. “There’s a role to be played with individual preparedness. I don’t want to downplay that,” Sansom says. “But I want to be clear that this was not a failure of individuals to be ready for the storm. It was really a failure of the system.”

In Sansom’s view, there’s no question that some of the deaths from hypothermia, carbon monoxide poisoning, failure of oxygen tanks, and traffic accidents could have been prevented if individual households received information from any government agency about the true toll of the disaster that would unfold over the course of the week.

“It’s clear as day,” he says. “All of this information [could have been] one sheet, front and back, that was easily translated. It could have been drawn up and sent out to a lot of people many, many, many days out.” 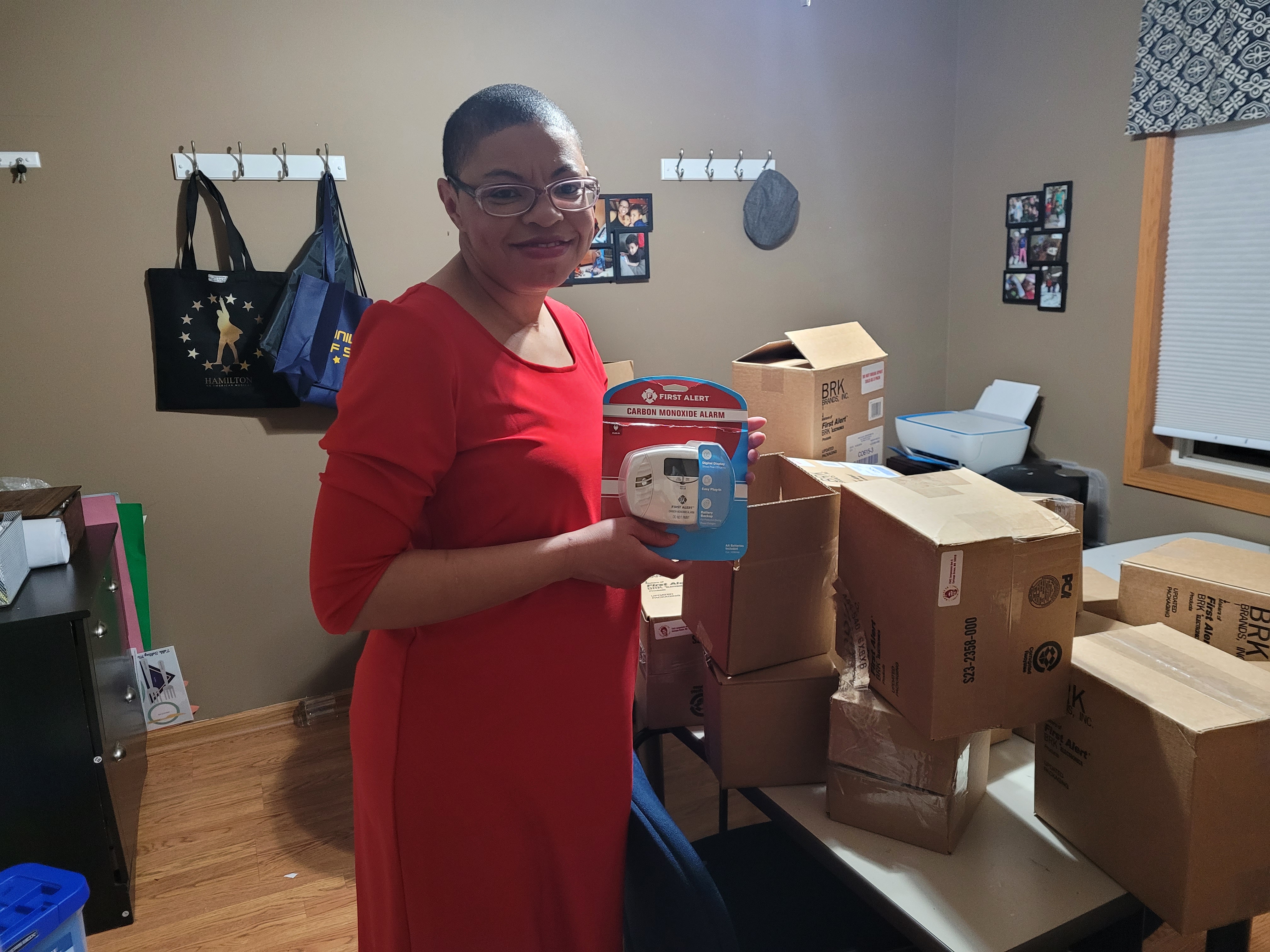 In Galveston County, emergency managers know how to prepare for fast-moving hurricanes, says Jed Webb, the county’s director of governmental relations. Once a storm is a few days out from the coast, they move to set up evacuation shelters with generators and other supplies in case of power loss. Residents know to pay attention to local warnings on social media, or through emergency alerts.

But the advance warnings that the county received for Winter Storm Uri never truly captured the risks that the county was about to face. “Anything we were getting from the state, it was about cold weather,” Webb says. “It wasn’t about what ended up being a severe outage that caused the water system to break.”

By the second day of the storm, 90 percent of Galveston county’s residents had lost power, and thousands had their water shut off as pipes burst across the island. As water pressure dropped across the system, cities had to enact boil notices to protect against potential contamination; the last one wasn’t lifted until Feb. 22. Local officials hadn’t set up generators for warming shelters before the roads became too icy to drive on. They didn’t evacuate elderly citizens or children, who are most susceptible to cold, before homes lost power. There was no indication of the cascade of crises that the snow and cold would bring.

In 2020, Hurricane Laura damaged much of power company Entergy’s transmission systems in Louisiana and Texas, limiting access for customers while a heat wave choked the area. As temperatures reached above 90 degrees for over two weeks, residents turned to generators to cool their homes. Carbon monoxide poisonings followed: the fatal gas was a leading cause of death after the hurricane in Louisiana. Of the 31 Hurricane Laura-related deaths recorded by the Louisiana Department of Health as of Jan. 8, nine were linked to carbon monoxide poisoning. Another nine were linked to heat-related illness. Several more carbon monoxide poisoning deaths were identified in southeast Texas. During Winter Storm Uri, Harris County alone reported more than 500 carbon monoxide cases, according to the Houston Chronicle.

Yet guidance on how to properly operate a generator and stay safe during a power outage is lacking. Calcasieu Parish, where Lake Charles is, has just one line about the issue on its hurricane tip sheet: “Use care handling power tools, gas lanterns, generators and matches.” There is no specific guidance for a winter weather event on the parish website.

New Orleans’ emergency preparedness body, NOLAReady, has more detail; its website advises people to “keep generators outside and away from your home” during a power outage, and reminds residents to check their carbon monoxide detectors. Alert Houston included one bullet point in its pre-storm email alerts about safely using generators and heaters, but the city and Harris County did not start pushing out urgent warnings over social media until after the power outages began — once Houstonians started showing up to hospitals.

Louisiana didn’t have a surge in carbon monoxide poisoning hospitalizations and deaths last month, likely because there weren’t widespread, prolonged power outages. Germillion said his office’s primary concerns were sheltering unhoused individuals — the parish has seen a rise in homelessness since Hurricanes Laura and Delta last year — and responding to water system outages.

Robert Jump, deputy director for the Caddo Parish Sheriff’s Office — which houses the northwest Louisiana parish’s emergency management team — echoed Germillion. “We were very fortunate that power was not a major issue, that we were just dealing with water,” he said.

Still, experts say there’s a general lack of long-term preparedness. In 2011, the last time Texas saw a major winter storm, meteorologists and scientists predicted that it was a one-in-10 year event. But the state has done little to prepare in the past decade. Had the Public Utilities Commission, or the Electric Reliability Council of Texas (ERCOT), heeded the warnings and prepared for the possibility of extreme weather, the extent of the power outages, and the subsequent water issues, could have been much smaller.

ERCOT declined to comment, deferring to the PUC and the Texas Department of Emergency Management, the latter of which declined to comment. The PUC stated that TDEM was responsible for communicating with local entities during the crisis. “Our agency also began communicating with legacy media and through social media… It would be difficult to conceive of a way to provide more advance warning of a situation that was so unprecedented and unexpected,” Andrew Barlow, the agency’s spokesperson, said.

There’s some evidence that extreme winter storms, like Uri, could become more frequent as climate change weakens the polar jet stream: As the Arctic warms up, the cold air that’s usually bottled up in the North Pole flows south, plunging North America into a deep freeze. “The bigger, thousand foot view of all these issues is that we have to shift from reaction to being proactive,” Sansom says. “There’s a whole host of things we need to be resilient towards, from hurricanes to wildfires and droughts.” It’s not enough to ask people to stockpile blankets, food and oxygen tanks.

“There has to be a unified front, and a communal response and shift towards taking care of all of us,” he says. The winter storm, just like almost every natural disaster in the South, shed a glaring light on the vulnerabilities that make it more difficult to prepare for a storm, like medical conditions, disability, and poverty. “Until we do that, there are going to be more unnecessary deaths. If it’s not a winter storm, it will be a hurricane or something else.”

Brundidge, an author and podcaster, reached out to Houston TV stations in the days leading up to the winter storm and offered free carbon monoxide detectors to Texans. She received hundreds of requests. Individual donations — along with money her family had set aside for a trip to Houston this spring — allowed her to send out 450 detectors. Now, she is out of stock, but plans to provide more free detectors to cash-strapped people in the future. She also hopes to see more public education campaigns around the issue outside times of crisis. “These deaths are preventable,” she said. “They don’t have to happen.”

Amal Ahmed is a reporter for Texas Observer.