An oil company wants to drill in Big Cypress National Preserve. Laws over mineral rights have complicated the fight to stop it.

Betty Osceola, an elder of the Miccosukee Tribe of Indians, lives in Big Cypress National Preserve in Florida, where a small Texas-based oil developer wants to build seven new wells. Burnett Oil Company slipped in its application on Jan. 22, days before President Joe Biden signed an executive order pausing new oil and gas leases on public lands. “I wasn’t surprised,” Osceola said through a bitter laugh — she knew it would happen eventually.

Big Cypress is part of the Greater Everglades and spans 729,000 acres — a size comparable to  Rhode Island — across the heart of South Florida. Ecologists describe it as a mosaic of distinct yet interconnected wetland ecosystems: hardwood hammocks, pine flatwoods, sawgrass prairies, marshes, sloughs, and gloomy cypress domes with cottonmouths and ghost orchids and endangered panthers.

One of the proposed oil fields is near the preserve’s border with Miccosukee Reservation, and tribal members say cultural sites in the area could also be affected. For some Miccosukee and Seminole Tribe members, the preserve is home. “A lot of our people died on this land to protect the right to exist here,” Osceola told me when I first visited two years ago.

Underneath that land may be millions of barrels of untapped oil, a possibility that has thrust Big Cypress into a protracted fight over oil development. In 2017, Burnett began exploring the preserve. Osceola remembers marching into the sawgrass one afternoon and coming upon 30-ton “thumper trucks.” The machines, using seismic reflections like sonar to find oil pockets, left behind 169 miles of tire tracks — longer than a drive from the Atlantic Ocean to the Gulf of Mexico. Burnett’s exploration caused “mechanized land clearing, ditching and channelization,” according to a 2020 report by the U.S. Army Corps of Engineers. The Corps later rescinded its findings because “Burnett operated within the requirements of [its exploratory] permit,” John Campbell, a spokesperson for the Corps, said in an email. “[W]e had no clear evidence of any residual adverse effects from Burnett’s activities on the hydrology or biology of Big Cypress.”

Burnett has since continued its pursuit for drilling permits.

Oil development opponents, including Osceola and conservation groups like the Natural Resources Defense Council and National Parks Conservation Association, have made little progress with protests and lawsuits because Big Cypress is a split estate, which means the property rights to the surface and underground minerals are owned separately. While the surface of the wetland is federally owned and managed by the National Park Service, the minerals belong to Collier Resources Company, a local developer and the family-run legacy of one of Florida’s most influential advertising and real estate magnates, Barron Collier. (At the time of his death in 1939, Collier owned more than a million acres of land, the most of any landowner in the state.) The arrangement affords the company — and its leasee, Burnett — the right to extract oil and gas, so long as the preserve remains “unimpaired for the enjoyment of future generations.” Neither company responded to multiple emails and phone calls.

As of 2016, the federal government held the mineral rights for almost all of its 640 million acres of public land, with the exception of 4 million acres. The Park Service reported in the same year that 42 national parks were split estates, nearly half in the South. Twelve — including in Kentucky, Texas, Tennessee, West Virginia, and Florida — had ongoing oil and gas operations.

Legal experts say the push in Big Cypress reveals the limits of Biden’s pause on leases and raises questions about future drilling on other split estates.“They already are the owners of the subsurface rights,” said Jessica Owley, professor of environmental and property law at the University of Miami. “They don’t need a lease from the federal government.”

In the U.S., split estates are rooted in what’s called a broad form deed, an agreement typically between two private entities and used widely throughout Appalachia in the late 19th century. The doctrine severed ownership of the topsoil from underground coal, granting mineral owners liberal use of the surface to extract their property, such as the right to construct buildings and divert waterways. Some historians say the deed, benefitting elite industrialists over farmers, fueled poverty and environmental degradation in the region.

Federal split estates grew out of a similar arrangement codified by the 1916 Stock-Raising Homestead Act, which lured settlers to the West by granting land to any U.S. citizen willing to farm their allotment. Previous homestead acts didn’t maintain national control of the subsurface rights “mostly because the federal government had no idea that oil and gas existed or was valuable,” said Joseph Schremmer, professor of oil and gas law at the University of New Mexico. As a result, early homestead areas like the Great Plains tend to be privately held. In areas farther west — homesteaded after 1916 when the government realized the value of oil — “many of those minerals were reserved by the feds.”

In 2019, 26 million acres of federal minerals were under lease to oil and gas developers, generating $4.2 billion in revenue.Big Cypress, Schremmer said, is a more unusual federal split estate with ownership flipped: the government owns the top of the land, a private company owns the bottom. Years before Big Cypress was a preserve, it was an unprotected swamp. In the 1960s, local politicians proposed paving over sawgrass to make way for the world’s largest jetport. Conservationists, hunters, and Indigenous people coalesced against the project, noting that the swamp shared a border with Everglades National Park. For six months of the year, Big Cypress fills with up to three feet of freshwater that flows southeast, providing 42 percent of its neighbor’s water, according to one estimate. The coalition argued the jetport would destroy the iconic national park, along with Big Cypress. The Department of the Interior ultimately agreed. 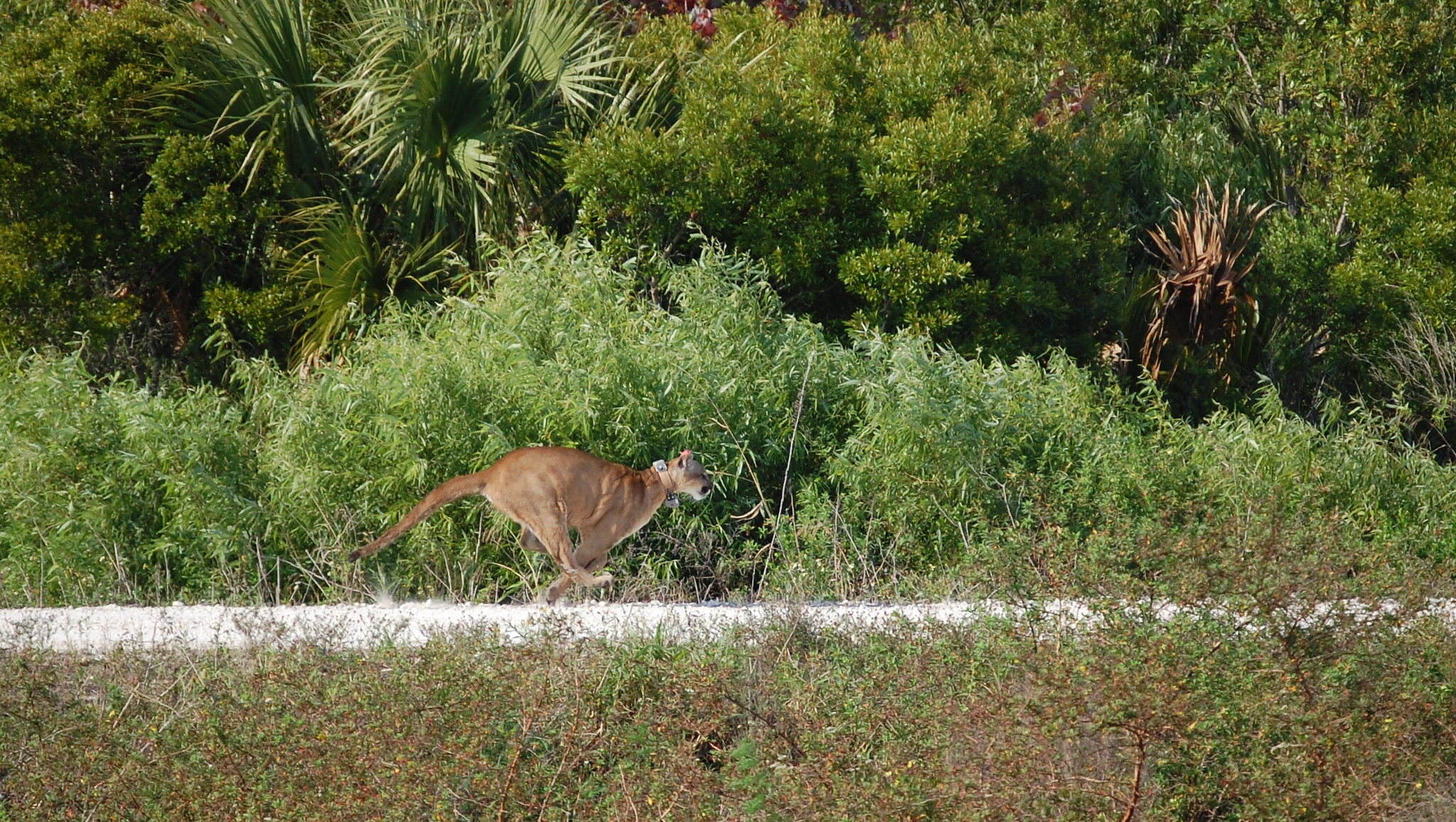 Big Cypress was established in 1974 as the country’s first national preserve. The concept “was born from an exercise in compromise,” the Park Service later wrote. Much of the surface was transferred to the federal government from the Collier family. But unlike in most national parks, Congress specifically authorized oil and gas development in the preserve’s enabling act. Since then, the Collier company and others have built a handful of oil fields in the preserve, two of which are still operating.

Environmentalists and scientists told me the existing fields, built more than four decades ago,  show how little Florida stands to gain from new wells. To date, the two fields have produced 31 million barrels of oil, the Collier company reports. That’s fewer than Texas produces in a week.

“If you look historically at efforts to develop oil in South Florida, the data doesn’t support the environmental cost versus the actual benefits,” said Kathleen Sullivan Sealey, an ecologist at the University of Miami.

Burnett’s January permit applications with the Florida Department of Environmental Protection propose filling in 33 acres of wetlands for the construction of two pairs of limestone drilling pads and access roads. The agency, which recently assumed regulatory authority for such permits from the Corps, has yet to issue a decision. In February, it requested more details. “With projects of this scale and scope, it is not uncommon for there to be at least one, if not multiple requests for additional information,” spokesperson Weesam Khoury wrote in an email. “Each of these responses may take up to 90 days or more.”

Sealey and other biologists argue that the ecological injury from new wells could be grave, even if the proposal calls for only a couple acres of construction. “Big Cypress is the last remnant of functioning cypress wetlands,” she said. “It’s a huge deal because it fragments the landscape,” disrupting the movements of endangered Florida panthers and redirecting the flow of water. One of the proposed drill sites is frequented by panthers, according to panther telemetry data.

Another fear is spills. “Oil spills also are notoriously difficult to clean up, especially in challenging environments like the Everglades,” said John Fauth, a biologist at the University of Central Florida. “They cause both immediate damage and long-lasting, chronic effects.” Between 2011 and 2015, existing wells in Big Cypress have spilled eight times, totaling 15 barrels of oil and 424 barrels of saltwater. All but four oil barrels and 13 saltwater barrels were recovered, according to the state Department of Environmental Protection.

Some researchers — as well as Burnett Oil — claim the effects would be relatively minor. Jim Snyder, a former research biologist at the U.S. Geological Survey, was stationed at Big Cypress for three decades. “As someone who loves the Big Cypress, I hate to see any of it bulldozed and covered with lime rock fill,” said Snyder. “But other than the small fraction of land that has impact, I don’t see any major ecological issues.”

The Park Service did not respond to questions about the environmental effects of development. A spokesperson said in an email that the agency was reviewing Burnett’s operations and preparing an environmental assessment. 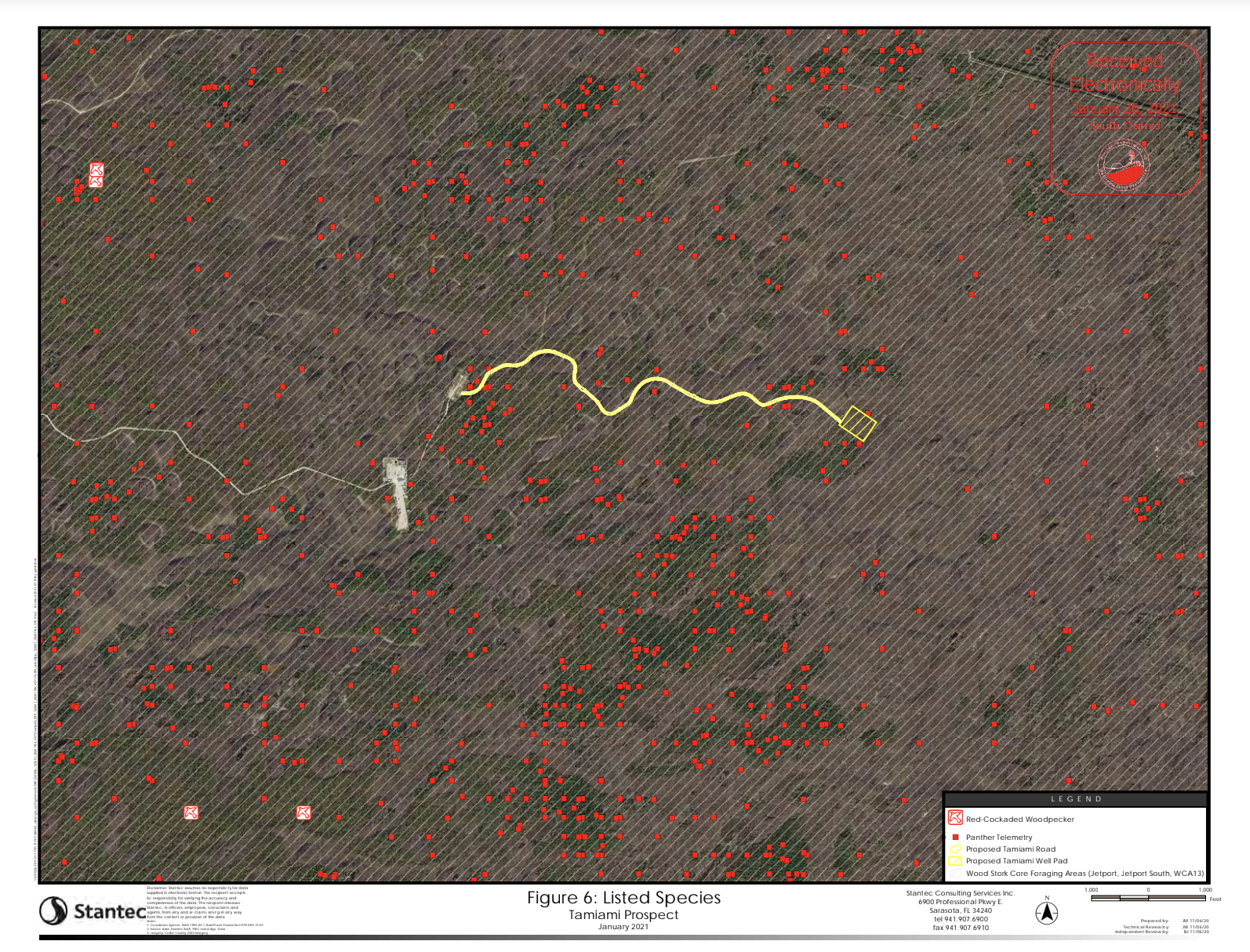 One of the proposed drill sites is frequented by panthers.

The Greater Everglades is marked by a history of violence and colonialism. The Indian Removal Act of 1830 prompted the forced expulsion of tens of thousands of southeastern Native Americans to west of the Mississippi River. Five years later, after tribe members refused to leave the Everglades, the Second Seminole War erupted, the nation’s longest and costliest assault on Native nations. Federal troops drove an estimated 3,000 Seminole people to the West.

One of the proposed oil fields is roughly 2,000 feet from the preserve’s border with Miccosukee Reservation. Having grown up gathering plant medicines and participating in ceremonies at the preserve, Cypress, 40, fears drilling could disturb those traditions.

Kevin Donaldson, the tribe’s director of real estate services and historic preservation, echoed Cypress’s fear: “This area is replete with known cultural sites which cannot be impacted,” he said. Burnett contends that construction is unlikely to overlap with such sites because most of the project will be in wet, low-lying areas where artifacts are uncommon. 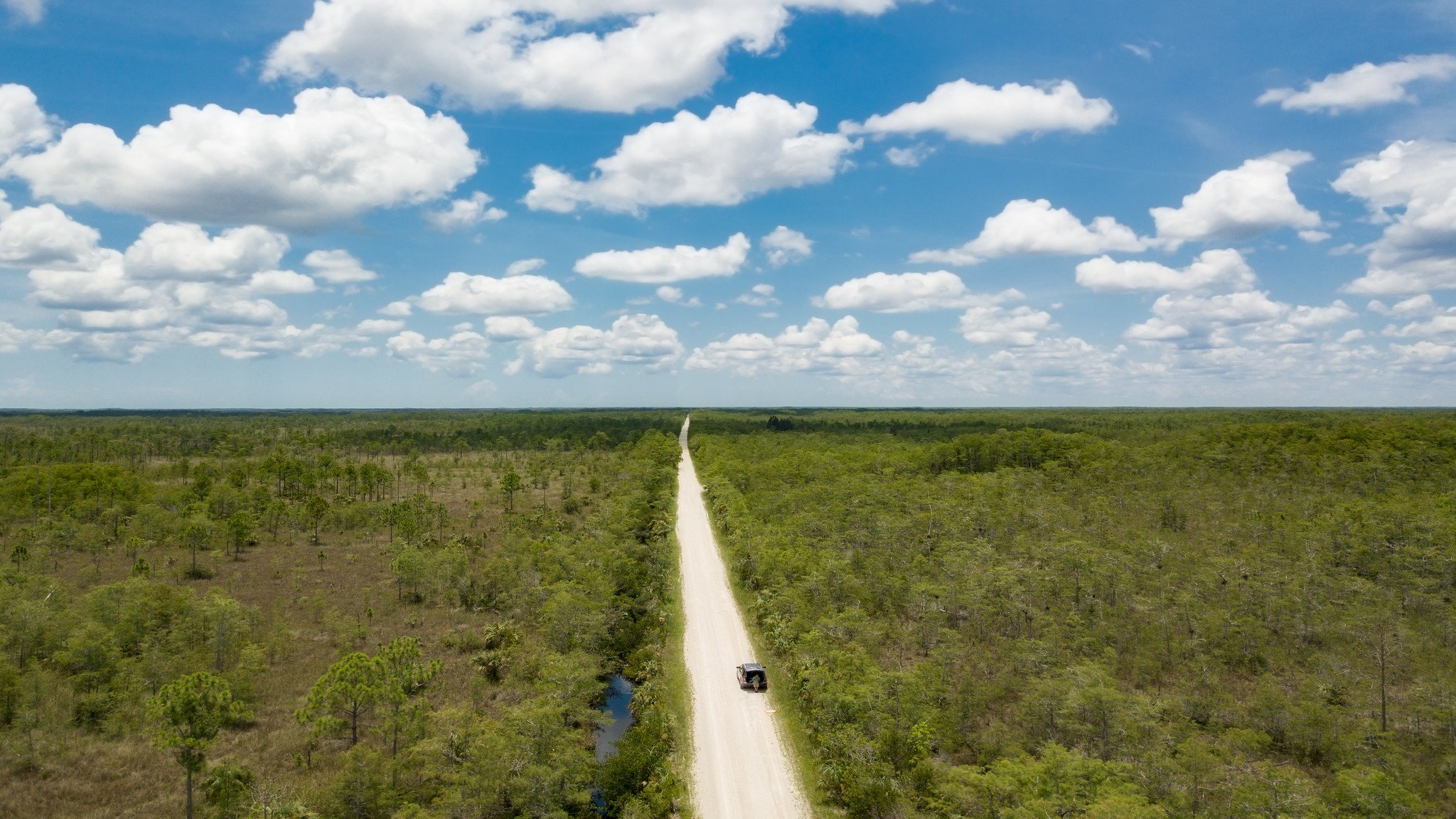 In the preserve’s enacting legislation, written nearly 50 years ago, Congress granted the Secretary of the Interior the authority to acquire the mineral rights — the Collier company’s mineral rights — if development would be “detrimental to the purposes of the preserve.”

Rep. Deb Haaland of New Mexico, Biden’s pick to head the agency, told lawmakers in her confirmation hearing that she is committed to upholding the president’s climate-forward agenda.

According to Hillary Hoffmann at Vermont Law School, that could mean interpreting the president’s executive order more broadly to include permits, halting development in Big Cypress. Even if there wasn’t an executive order, Hoffmann said, “she would have the authority to hit the pause button” or end the oil debate entirely by exercising her right of acquisition. She — or Congress — could buy back the minerals.

“I think that’s a great idea,” Cypress said. “If I were to make a wish, that would be my wish.”

Dean Russell is a science reporter covering health and the environment. He can be reached at dean.russell@protonmail.com.