Poor energy efficiency and weatherization standards in Southern states made it even harder for people to stay warm and safe.

When the temperature dropped into the single digits last Monday night, Edilisa wrapped herself and her 9-month-old baby in blankets and huddled in the closet of her studio apartment in Austin. It was the only way she could think to separate the two of them from the large windows that usually bring in lots of natural light — but with an arctic cold front sweeping over Texas, leaked a steady stream of frigid air.

“I’ve never experienced this before,” said Edilisa, a 28-year-old single mother, who asked to use her first name only due to immigration concerns. With her power shut off intermittently from early Monday to Wednesday, “It felt like it was 20 degrees inside.” But as much as she wanted the heat to turn back on, there was another worry looming over her: With the extreme cold temperatures, her heater was running in overdrive before the outages started. How much higher would her bill be at the end of the month? Though she lives in an affordable housing unit, Edilisa doesn’t qualify for most federal aid programs since she’s a DACA recipient. “People like me are scared to ask for help,” she said.

Edilisa is one of more than 78,000 Texans who, in a normal, relatively mild winter when the temperature rarely reaches freezing, report feeling too cold in their own homes. This is due to a variety of factors, including poor insulation and keeping indoor temperatures low in order to avoid high bills. Despite estimates indicating that every dollar invested in weatherization of homes — which protects the interior from the elements and optimizes energy efficiency — results in as much as $4 in savings, housing advocates say that federal programs haven’t been able to reach the households most in need. According to Census data collected through the 2019 American Housing Survey, Black and Latinx Texans reported feeling uncomfortably cold for at least 24 hours at a rate nearly 50% higher than the statewide rate.

Southern states have some of the highest rates of electricity usage, but lag far behind other areas of the country in energy efficiency. Southerners also spend the most on power bills. In Texas, low-income families spend 8 to 10% of their income on energy costs in a given year; across the South that number runs even higher — as much as 14% in Mississippi, where 200,000 people lost power last week. This winter, as families are already tightening their budgets due to the pandemic, the severe storm could bring even higher energy bills — on top of plumbing repairs, hotel stays for those lucky enough to find warm shelter, and restocking a week’s worth of fresh food that started to spoil during the power outages. 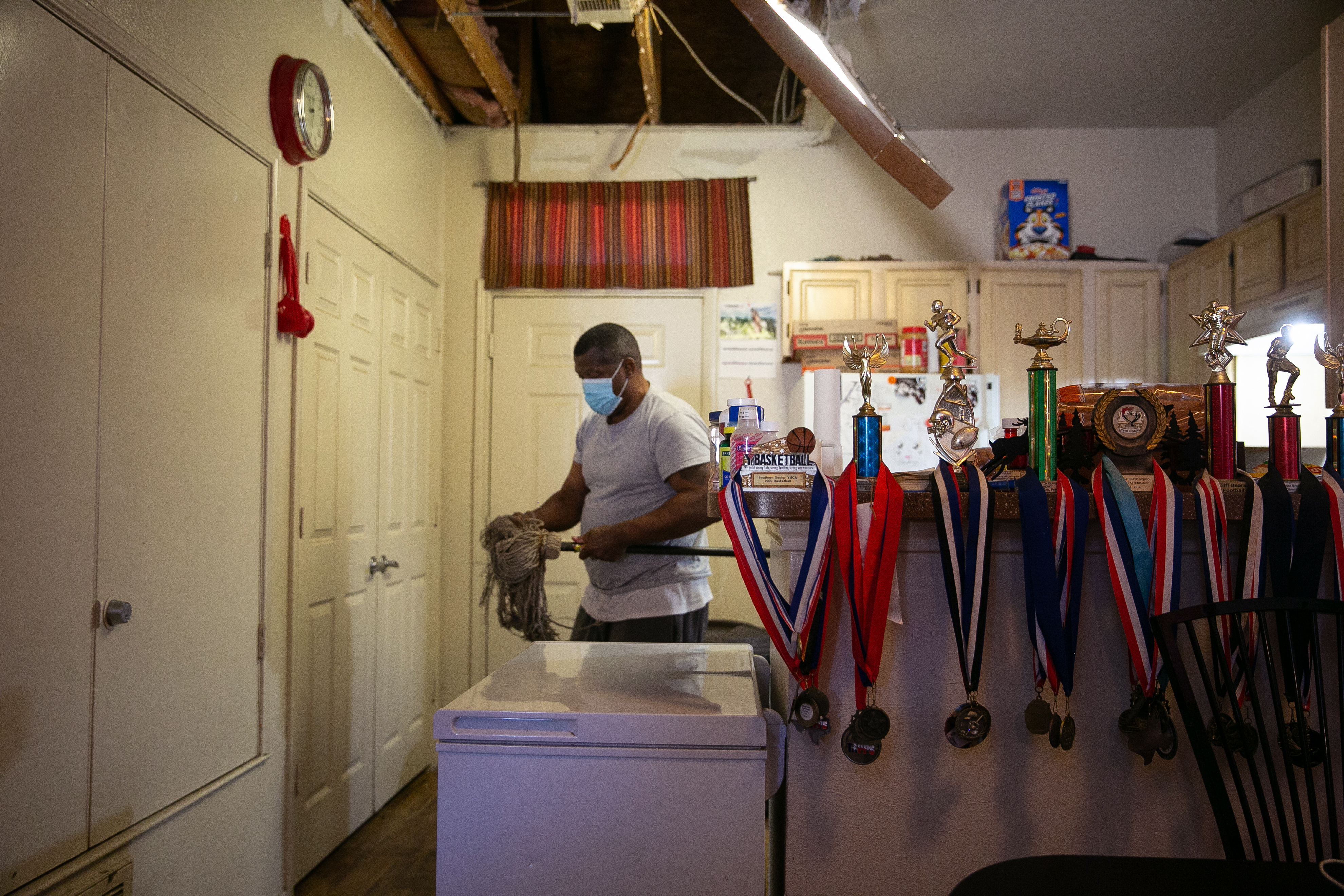 Paul Smith mops water after experiencing a busted pipe in his kitchen on Saturday February 20, 2021. Smith, who lives in the Lakeview Townhomes, which is part of the Dallas Housing Authority, lost power on Sunday, February 14, and the pipe broke on Thursday, February 18. Photo by Andy Jacobsohn/Deep Indigo Collective for the Texas Observer

“If you look at the demographics of who lives in severely or moderately inadequate housing, it’s almost always people of color, renters, and low-income people,” said Carlos Martín, a housing researcher at the Urban Institute. Given the long history of racial segregation in the South, communities of color are least likely to be located in “critical infrastructure” areas where the lights never went off during the power outages, like downtown neighborhoods or near hospitals, Martín said.

Last week, temperatures across the South and Central United States dropped to record lows. The region between El Paso and Biloxi, Miss. experienced temperatures 30 to 40 degrees below normal during this time of year. A days-long power outage gripped Texas and the Gulf Coast states, becoming deadly. The storm stretched out as far east as Kentucky, where 41,000 people lost power.

More than 70 cold-related deaths have already been reported nationwide, including more than 30 in Texas. In Conroe, an 11-year old boy went out to play in the snow on Monday and died in his sleep that night of suspected hypothermia, after the mobile home where he lived lost power. Desperate families tried to start fires or warm up in their cars, sending hundreds to the hospital for carbon monoxide poisoning. Public health officials warn that the tolls could climb higher as they certify death certificates and reach out to vulnerable people who were stranded alone in their homes.

Many of the low-income people who survived the brutal cold may now be facing steep electricity bills. Some can turn to a federal program called the Low Income Home Energy Assistance Program (LIHEAP), which funds utility assistance programs, weatherization, and upgrading old heating or cooling equipment for households below the poverty line. Income requirements for eligibility vary by state. The funding for utility bills in particular has already been strained as families facing unemployment and wage loss from the coronavirus pandemic have been relying on aid since March 2020.

For Bill Powell and Henry Tarango, who oversee LIHEAP funding at the Levelland-based South Plains Community Action Partnership (SPCAP), the deep freeze shows how the program is like a bandaid on a wound. “Our assistance program is maxing out,” Tarango said. 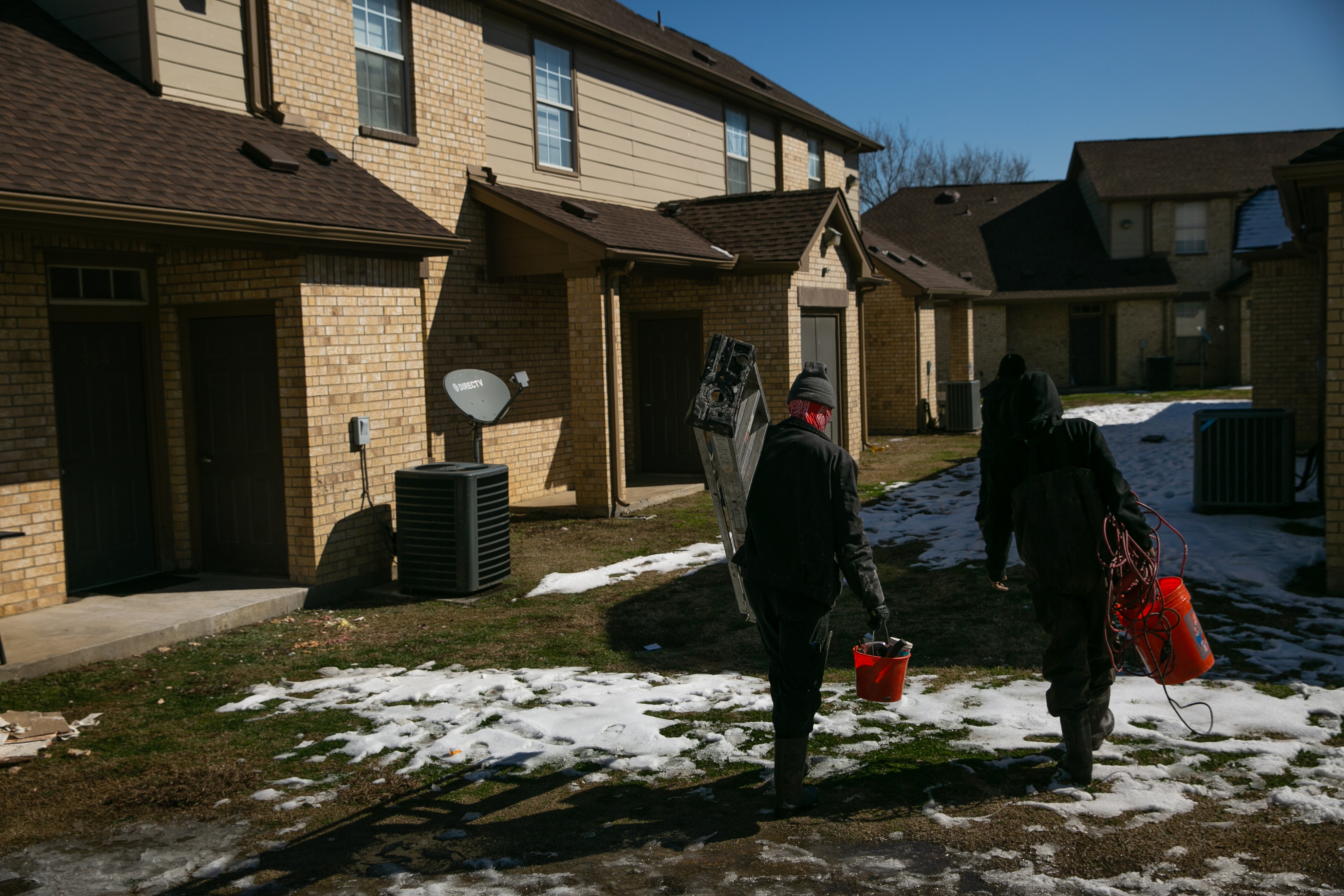 Plumbers move between units while fixing busted pipes at the Lakeview Townhomes, which is part of the Dallas Housing Authority, on Saturday February 20, 2021. Texans statewide are fixing broken pipes after nearly a week of sub-freezing temperatures and power outages. Photo by Andy Jacobsohn/Deep Indigo Collective for the Texas Observer

The Levelland organization also provides weatherization programs, using federal dollars to replace old insulation, upgrade heating units, and insulate water lines: All things that could have made the cold last week a little more bearable for thousands of low-income families across the state. Weather stripping and insulation would have reduced the amount of heat that had to be pumped into a house when the power was on, and kept that heat in for longer when the power turned off. Insulation on pipes would have kept them from breaking as water froze and expanded. When pipes burst, homes often flood, causing thousands of dollars worth of property damage.

“Energy efficiency is a public safety issue that no one is talking about,” said Daniel Tait, a researcher at the Energy and Policy Institute. “An energy efficient home saves people money all the time, and it would also reduce the peak demand we saw.”

Across the South, there are relatively few building codes focused on energy efficiency, and no mandates to retrofit older homes that have poor insulation. Utility companies often lobby against such codes and regulations — they would reduce demand, and thereby profits, Tait said. That’s why federally-funded weatherization programs can make more of a difference.

But there’s never been enough funding for weatherization programs, Powell said, and the crisis brought on by Winter Storm Uri has shown the depths of the problem. On top of that, the most in-need households are often the ones that his organization has to reject. The overall construction of the home has to meet state building codes for safety — a limitation that causes SPCAP to turn away about six out of every 10 applicants, because the homes need too much work, Powell said.

These households suffer through the freezing cold and blistering heat every year, not just during an extreme weather event. “I have been doing this work for 48 years, and I’ve seen nothing but people fall through the cracks,” Powell said.

In February 2011, the last time the state experienced a major deep freeze, Texans filed over 16,000 insurance claims, accounting for $124 million in property damage, according to the Texas Department of Insurance. But the extent of the damage was much higher: Homeowners without insurance have to cover the costs of repairing floors and insulation and replacing damaged furniture on their own. There are no federal or state funds to help defray the costs of faucets dripping water constantly, or the gush of water spewing out from frozen, broken pipes. Renters almost always have fewer ways to recover property damage through insurance, and they may face temporary displacement. This year, it’s unclear if the federal pandemic-related moratorium on evictions will apply to units that are so badly damaged they require extensive repairs. After Hurricane Laura last summer, evictions in Louisiana spiked as landlords used state loopholes to get around the federal moratorium. In Louisiana, as well as Texas, landlords can file to terminate a lease if a housing unit is damaged during a natural disaster.

On Thursday, Paul Smith’s ceiling collapsed with the weight of the water leaking out of burst pipes. Smith lives in an affordable housing complex managed by the Dallas Housing Authority, and he said no one from the agency’s maintenance office came to help residents clean up the mess. “When it came down, you could tell it wasn’t done right,” said the father of three. Smith, who lives on fixed income, couldn’t afford the monthly fee for renter’s insurance, so he won’t have a way to recover the costs of property damage. “It is what it is. That’s the way life is for people of color,” said Smith, who is Black. “The survival skills kick in, and we survive the best way we can.” 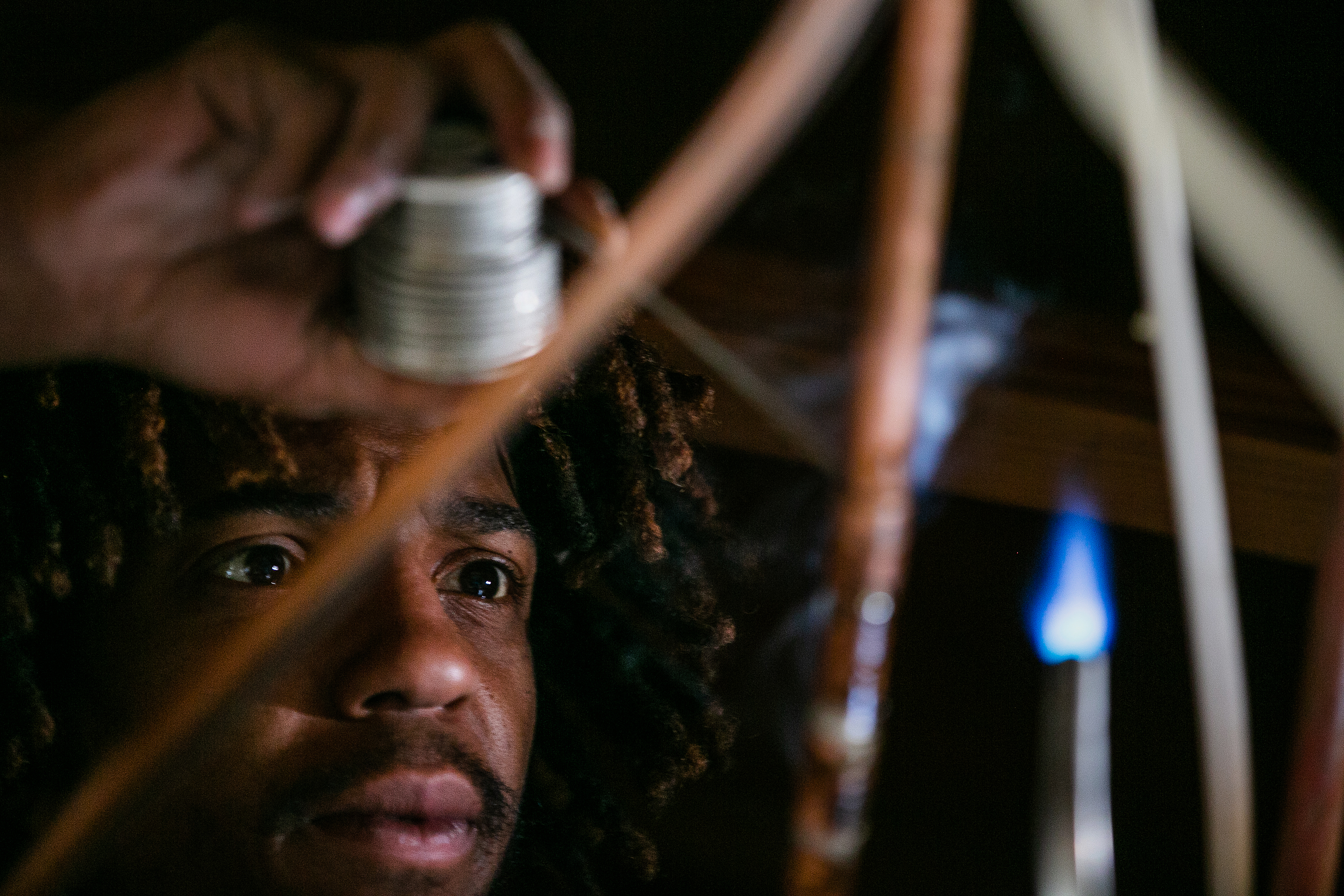 Plumber Shashid Taylor-Bey mends a busted pipe in a unit at the Lakeview Townhomes, which is part of the Dallas Housing Authority, on Saturday February 20, 2021. Texans statewide are fixing broken pipes after nearly a week of sub-freezing temperatures and power outages. Photo by Andy Jacobsohn/Deep Indigo Collective for the Texas Observe

This is all happening as unemployment related to the COVID-19 pandemic has further strained people’s finances. Martín, the researcher at the Urban Institute, said that it could take low-income households at least four years to recover from the financial damages that Winter Storm Uri left in its wake. “What we’ve seen in all of our studies is that for low-income people, the financial consequences are much deeper and last much longer — that could be the same case with this natural disaster which has become a social disaster,” he said. “And on top of that, we’re in the middle of a pandemic.”

Edilisa, the single mother in Austin, hasn’t gotten her February electric bill yet. The Public Utilities Commission (PUC) of Texas has banned utility disconnections for households that can’t pay their bills, but neither the PUC nor Austin Energy, her provider, has waived payment yet. In other Southern states hit hard by Uri last week, bans on disconnections during the pandemic have expired and so far haven’t been renewed in light of the storm.

Edilisa’s costs are already piling up: Her baby started to get sick after the first night spent in the freezing cold. She wasn’t able to stockpile groceries ahead of the storm since she doesn’t have a car, and during the storm, she split her dwindling supply of baby formula with other undocumented moms in her neighborhood. After losing refrigerated food when the power went out and relying on pantry staples, she will have to spend more than her weekly budget to replenish their stock. This summer, her contract at work will expire, due to pandemic-related budget cuts — just as she’ll be moving to a bigger, more expensive apartment so she can take care of her mom. Crises compound. But it’s a small mercy that her pipes didn’t burst, too.

Amal Ahmed is a reporter for the Texas Observer.

Deep Indigo Collective is a visual storytelling resource supporting news outlets reporting on the local impacts of environmental threats and the climate crisis. As a 501(c)(3) organization, Deep Indigo is proud to produce original visual journalism on behalf of our editorial partners across the U.S.