Organizers, scholars, and scientists are working with residents of Snow Hill, a rural and predominantly Black town, to call attention to the toxic burden heaped upon their community.

On a bright, chilly morning in mid-November 2020, a handful of Sampson County, N.C. residents gathered at the parking lot of the Snow Hill Baptist Church. Ellis Tatum Sr., the county organizer for the North Carolina Environmental Justice Network, and Sherri White-Williamson of the Environmental Justice Community Action Network, called everyone together to talk about the ever-growing mountain of trash in the middle of the historically Black community, Snow Hill.

Tatum recalled a time when people would gather in that very lot just to talk. But those days are gone. The smell from the nearby landfill — which residents describe as greasy, oily, like decaying flesh — has driven people inside. The scent even permeates their vents in the summertime.

“I don’t think we’ll ever be able to close the landfill down,” Tatum said during the parking lot meeting. “Our purpose is for clean air and clean water for everybody.”

The Sampson County Disposal Landfill, privately owned and operated by the Canadian company, GFL Environmental Inc. — one of the biggest waste companies in North America — owns over 1,300 acres in the area, including large swaths of woodlands where Tatum once hunted, fished, foraged, and explored as a young boy. The landfill takes in trash and construction debris from all over the state, including from cities like Durham, which is nearly 100 miles away.

And then there’s the factory farms. Low slung hog and poultry houses, called Confined Animal Feeding Operations (CAFOs), dot just about every country road in Sampson County. According to the state’s latest data, there are over 2 million hogs in the county (the second most in the nation), nearly 7.5 million turkeys, and 38 million chickens.

The fumes from hog waste are particularly noxious. Hog feces and urine are liquefied, stored in open air lagoons prone to flooding, and regularly sprayed on fields as fertilizer. As part of a new proposed biogas project, Smithfield Foods and Dominion Energy plan to capture methane produced by hog waste at 19 farms across Sampson and Duplin Counties and pipe it to a central processing plant that would convert it to natural gas. The North Carolina Department of Environmental Quality is currently considering highly contested water quality permits for four Smithfield hog farms that would cap their lagoons.

Home-grown and statewide organizers, scholars, and scientists are calling attention to the sheer amount of environmental hazards near Snow Hill that threaten air and water quality. In keeping with the living legacy of environmental justice organizing in eastern North Carolina, they are working with residents to demand more accountability from polluters and regulators.

In Snow Hill, there are two eras of time: before the landfill, and after the landfill. The first dump site opened in 1973, with major expansions in the early 2000s. Lifelong resident Sherwin Parker laments that many people who began protests against the landfill have died.

For Parker, so much of communal life was tied to the land. Now, he feels its loss not just for himself, but for the younger generation. “I can’t share with them what my parents or the elders shared with me growing up,” he said.

“This community was brought up by farmers,” said Tatum. “Growing up, my father grew everything we needed except for flour, sugar, salt and pepper.”

Tatum, who now lives up the road from his childhood home in Snow Hill, remembers fondly the annual community-wide barbecues celebrating the end of the tobacco harvest. A veteran himself, he now tries to host a cookout every Veteran’s Day, but “the last two cookouts I’ve had, people have come to me and told me, ‘I’ll take me a plate,’” he said. “The smell is just so bad.”

Tatum said residents fear eating out of their own gardens. They buy water from the store to cook with to avoid what emerges from their wells. Buzzards swarm their properties. They hardly step outside in the summertime because the fumes are so bad, whether from the landfill or the hog houses.

The landfill contains three separate dumping grounds, two active and one closed. It accepts trash from all 100 counties in North Carolina and has taken in waste including sludge from the Chemours facility in Fayetteville, which produced GenX, a member of the PFAS “forever chemicals” family that polluted the Cape Fear River.

The Sampson County Disposal Landfill did not respond to multiple requests for comment.

Two of the landfill’s sites are unlined, meaning there is no barrier between the waste they contain and the soil and groundwater underneath. Since 1983, the state environmental agency has required all new landfills to have liners — but there are still 657 pre-regulatory sites scattered throughout the state.

The cumulative impact, or total harm to public health and the environment, of the landfill, industrial farming, and other polluters is systematically overlooked, said White-Williamson of the Environmental Justice Community Action Network, a Clinton native who formerly worked in the Environmental Protection Agency’s office of environmental justice.

The North Carolina Department of Environmental Quality now issues environmental justice reports on specific projects, including one on the biogas pipeline, but acknowledges the challenge of “integrating this perspective into the core mission of the department.” The department last issued guidance on evaluating cumulative impacts in 2004. The NCDEQ did not respond to a request for comment.

“When decision makers look at the facilities project by project, they are not taking into account the total impact of all of the facilities that may be in an area,” White-Williamson said.

The environmental justice movement got its start in eastern North Carolina in 1982, when citizens of Afton, a majority Black town in majority Black Warren County, fought — and ultimately failed — to stop the delivery of PCB-contaminated soil to a nearby landfill. Today, communities throughout eastern North Carolina, a region of the state that is also home to multiple Native American tribes and a growing Latinx population, see more industrial farming, mass deforestation, and landfills.

Snow Hill residents often wonder why it had to be their community. “We all feel targeted,” said Larry Williams, a lifelong resident of Snow Hill. “[The landfill] could have went anywhere else besides here, but we just didn’t have enough people from jump to start to fight it.”

Rivers, streams, and wetlands thread through the coastal plains of Sampson County. Prior to heavy industry in the area, fresh well water was abundant and safe. But based on the smell and looks of what comes out of their pipes, many residents don’t trust this area’s water.

Due to lax state testing regulations of residential wells, many residents in Snow Hill and Sampson County do not have access to information about potential contaminants in their water. The North Carolina Department of Health and Human Services says the onus is on homeowners to test their wells, whether they can afford it or not, but only wells dug since 2008 are required to be tested.

Residents could soon have more information on their water through a partnership with Appalachian State University. Shea Tuberty, professor of biology at Appalachian State, will send water sampling materials and instructions this spring to residents so that they can collect water from their home wells and bodies of water that are downstream from the landfill and CAFOs.

Tuberty will then test the samples and analyze whether any toxic elements present “exceed a threshold of toxicity as regulated by the EPA or the state.” If alarming levels of toxins are present, Tuberty’s hope is that the data will force the DEQ to pay attention to water quality in the area and take steps to “make it right.”

“It’s unconscionable that the state organization and people that work there whose sole job is to protect the community from toxins and maintain high water quality, haven’t even tested the water in the community,” Tuberty said.

One local official is starting to call attention to pollution in the area. Recently sworn-in County Commissioner Lethia Lee campaigned on improving access to clean water. Lee, the first Black woman to serve as a commissioner, represents District 4, which includes Snow Hill and most of southern Sampson County. “I’m not fighting for something that I don’t know about,” Lee said, whose own water was rusty, yellow and malodorous before she got connected to the town of Harrells water system. “If you don’t have clean water that you can drink, you won’t have a good quality of life.”

She said that these problems should have been fixed years ago. “I would want to think that [race] has nothing to do with it, but I’m not naïve enough to think that it didn’t.” 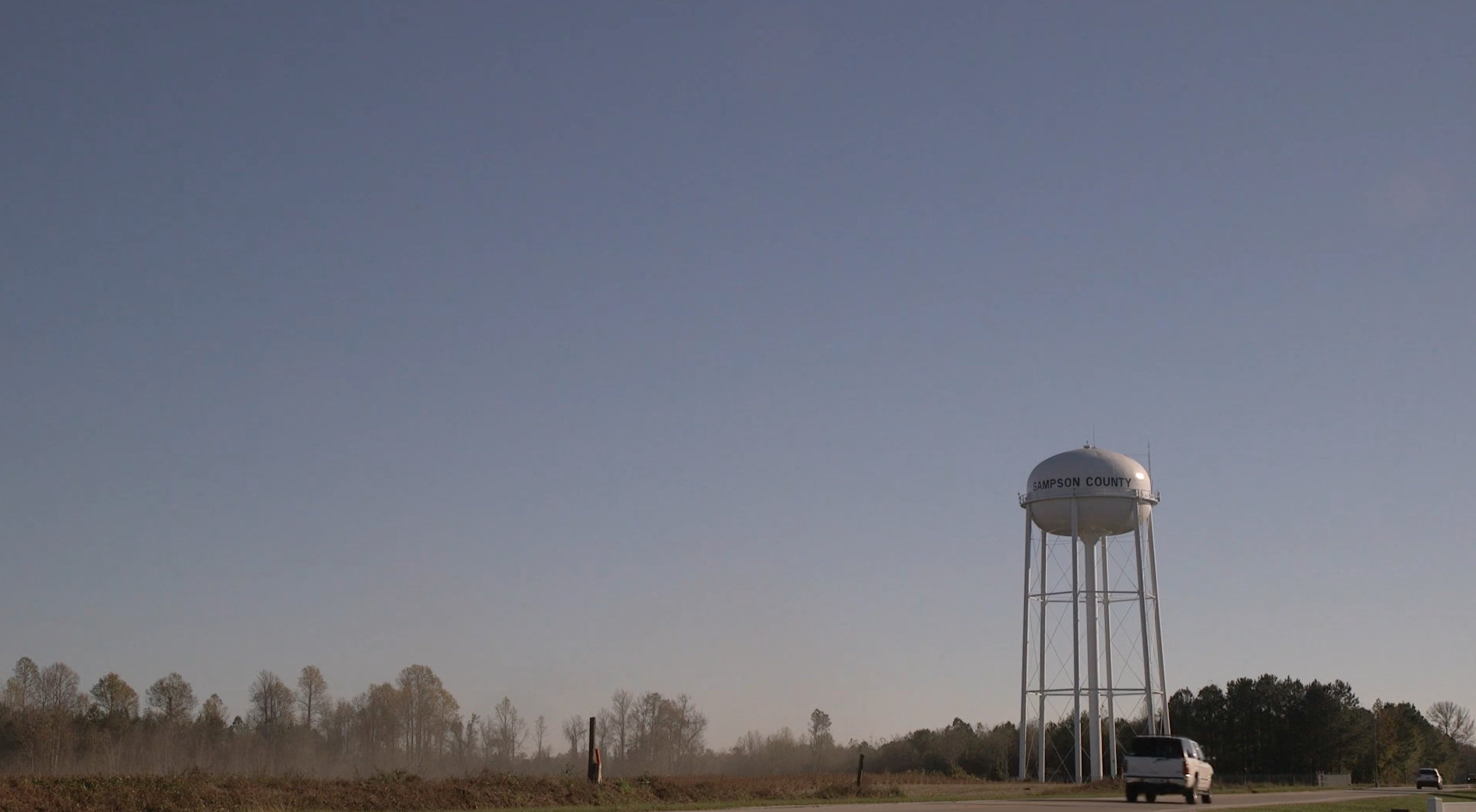 A road in Sampson County, N.C. By Joey Horan

Danielle Koonce, a native of neighboring Roseboro pursuing a doctorate in sociology at the University of Maryland, is researching how the landfill in Snow Hill has frayed the social networks of a once vibrant center of rural Black life and continues to reach its “tentacles” into other areas of the county. She’s a generation younger than Tatum, Parker, and Williams, and also witnessed  the change in her lifetime. The place once buzzing with life now feels empty to Koonce The impact of pollution and a general lack of opportunity have driven people away, she said.

Koonce believes that generations of racist violence dating back to slavery, the Jim Crow era, and the legacy of the Ku Klux Klan’s presence in the area continue to silence residents in and around Snow Hill. “There seems to be almost still a fear like, you know, ‘you don’t want to make these white people mad,’’ she said.

Koonce said that past commissioners “were blinded by the dollars” and prospect of employment when they supported the landfill. The five-person body is currently majority white and Republican. In such a rural county, standing up against potential employers and industry can be politically tricky, Koonce said, a dynamic once again playing out with the proposed biogas pipeline.

In such a large, rural county, with many different church and school communities, many people feel isolated. White-Williamson of the Environmental Justice Community Action Network said that organizing for immediate needs like clean water or challenging the pipeline permits can address this: These are acts that can seed a larger paradigm shift in how rural communities of color exercise and obtain political power.

“We need to be able to educate local community folks about all of these things: how to go to those meetings, how to access agendas to find out if there’s something on that meeting that you need to be able to talk about, to give folks that confidence to be able to stand up and talk about whatever that issue is that you’re passionate about,” White-Williamson said.

Back at the Snow Hill Baptist Church parking lot, White-Williamson already has willing partners in Tatum and his “soldiers,” as he calls them.

“We done been through too much,” Tatum said. “We’re going to fight until we get this thing right.”

Joey Horan is a reporter and video producer based in Durham, North Carolina. He can be reached at jjhoran29@gmail.com