Rural Southern communities have some of the highest levels of food insecurity, and it’s been worsening during the pandemic. Churches often bear the burden of filling in the gaps.

On a mild Southern winter day, in the basement of Desperation Church in Cullman County, Ala., a group of women sorted granola bars, candy, and chips into Ziplock bags. They do this for four hours each week, and then the church distributes the bags to families across the county and to schools.

Linda Stone, Desperation Church’s family ministries director, often recites a Bible verse to describe their work: In the New Testament book of Matthew, Chapter 25, Jesus praises his followers for feeding and clothing him. Confused, they asked when they had done so. He replies, “in as much as you have done for the least of these my brethren, you have done for me.”

Stone understands what it’s like to be poor and hungry. She remembers her grandparents or a church stepping in to help out her family. “When you’re little, it’s not shameful, because you don’t know what you don’t know,” Stone told me. “So we want to communicate to adults, to go to people that are taking in extra kids, feeding extra mouths, it’s not something you have to do alone.”

Many of the women serving alongside Stone are retired and don’t have much money. But they do have an abundance of time — it’s become part of their tithe. Down in Desperation’s gray basement, the women talked of growing up in Cullman with food insecurity or witnessing it as teachers. When they count out bags to deliver, they often wonder how many people they’re missing.

In many rural communities, churches far outnumber grocery stores, and they often take on food distribution as part of their ministry. Hundreds of volunteers in churches across the South and U.S. sort and organize food donated directly or via local food banks to give to those without reliable access to meals, and often galvanize to assist people after natural disasters. 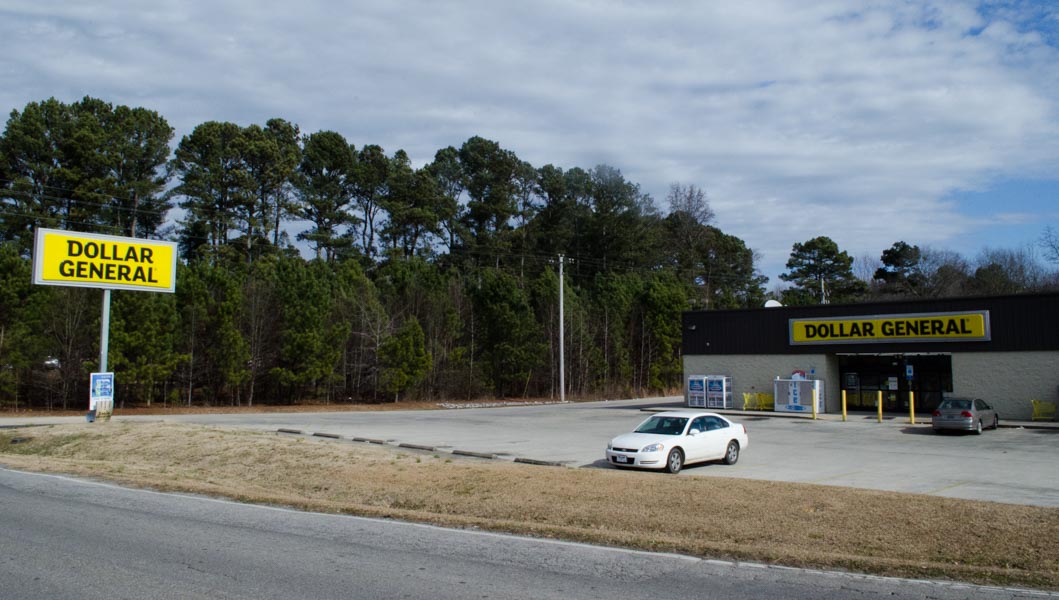 One of several Dollar Generals in Cullman County. Photo by Krysti Shallenberger

Right now is an especially crucial time for their work: 50 million Americans may face food insecurity during the COVID-19 pandemic, some for the first time, according to Feeding America, a secular hunger-relief organization. Religious institutions operate 62% of pantries or meal programs under Feeding America’s network of food banks and pantries, according to Kathryn Strickland, the organization’s chief network officer. In the South, churches are often one of the only institutions people trust in their community.

“For people experiencing stigma, fear or shame around receiving food assistance, they may be more comfortable accepting help through their local church,” Strickland said.

Feeding America reports the South’s rural communities have the hardest time accessing food, despite its rich agrarian economy. Before the pandemic, one in six Alabamians, or about 17%, did not have access to three adequate meals a day, a number expected to hit 20% during the pandemic. Alabama is the third most food insecure state in the nation, just behind Mississippi and Arkansas.

When schools shut down in early 2020, Feeding America estimated that 30% of Alabama’s children were without access to free or reduced lunches, which can lead to dire, long-term health impacts, according to Shirley Schofield, executive director for the Food Bank of North Alabama, a Huntsville-based member of Feeding America’s national network of food banks.

“You’ve got kids who are trying to learn on an empty stomach,” Schofield said.

Schofield said underemployment is one of the biggest drivers of food insecurity in the state. Twelve percent of Cullman County households lived below the poverty line before the pandemic. As of Nov. 2020, it boasted one of the lowest unemployment rates in Alabama — 2.4% — but one-fifth of working people have retail or food industry jobs, which typically pay minimum wage and were impacted by economic shutdowns. Alabama’s wages have remained stagnant in the last two decades. At least 62% of workers are paid less than $15 an hour.

The legacy of slavery and Jim Crow era-laws created economic disparity in the South that still hinders Black people from amassing generational wealth. Latinx workers also struggle to access high-paying jobs that would allow them to accumulate savings and investments. More than 50% of Black and Latinix workers in Alabama make under $15 an hour. While about 15% of households in majority-white Cullman County reported in 2020 that they were food insecure, majority Black counties in Alabama have rates double that. Some of the areas in Cullman county with the fewest grocery stores are home to Black and Latinx residents.

Pastor Raul Dominguez, a minister at the First United Methodist Church in Cullman, moved from Memphis, Tenn. five years ago to serve the Latinx community’s spiritual needs and help them navigate job and school resources. Dominguez and his wife, Arleen, who oversees the church’s food pantry, know that many people struggle to afford fresh produce, such as hot peppers, Roma tomatoes, and avocados, to cook traditional dishes. The church includes fresh produce in its pantry offerings.

“They have a lot of needs, because they never make enough [money],” Dominguez said. Many say they cannot afford to take off work to go to the food pantry while it’s open, so the church delivers bags of food and has offered drive-thru pick-ups during the pandemic.

Typically, the bags can last a family up to three days, he said. But with demand high from the uptick of COVID-19 cases and job losses in the winter, the Dominguezes had to stretch out supplies. By December, the church saw three times the amount of people they expected and ran out of food.

In rural communities like Cullman, a lack of reliable transportation is by far one of the biggest hurdles to addressing food insecurity in Cullman, according to Melissa Betts, community relations director for the local faith-based nonprofit The Link. “The majority of our food resources are located in the city at this point,” she said.

Alabama churches and local nonprofits depend on personal and local donations from grocery stores, but the bulk often comes from food banks in bigger cities. For instance, the Food Bank of North Alabama collects and purchases food, then partners with churches or other organizations in the 11 counties it serves to distribute it. A local real estate company allows The Link to use their truck for food pick-ups. Volunteers for Desperation Church drive 100 miles round-trip to the big food bank in Huntsville once a week.

Nestled deep in the lower southeast corner of Cullman is Colony, a predominantly Black town that was founded by former enslaved people after the Civil War and is now home to less than 300 people. Donnis Leeth, the former mayor of Colony, estimates one-third of residents don’t have access to food, and many lack reliable transportation. “Most of the elders, they can’t drive, ain’t got no cars,” he said. “Some of the young folks, some of them ain’t got no cars.”

The nearest grocery stores, not including the Dollar General, are 10 miles away. Leeth often makes a 140-mile round-trip to Huntsville to pick up food from the Food Bank of North Alabama as a volunteer for the local faith-based organization Carpenter’s Cabinet of Colony, and delivers it to community members.

Betts is trying to help fill these gaps so the burden isn’t on one community leader or church. The Link loosely coordinates with churches and school systems to create what she calls “halos of help,” which are small groups of schools, churches, and local organizations situated in the county’s smaller towns that can distribute food faster to residents. Some churches, including Desperation, ask local politicians, and school administrators to pinpoint families or areas most in need.

The coordination between local government agencies and churches is usually informal, or sometimes propelled by a natural disaster, like the 2011 April tornadoes that flattened much of the county. Feeding America’s Strickland said that relying on private-public partnerships, churches, local nonprofits and government programs to help people access food only scratches the surface of addressing the barriers to food security.

“The only way we can successfully address food insecurity,” Strickland said, “is when we address the root causes of hunger and deepen our understanding of structural and systemic inequities that disproportionately impact marginalized communities and people in need of assistance.”

In the meantime, rural residents — church volunteers, pastors, former mayors — keep working to address these challenges. At 10:30 p.m. on Jan. 25, a tornado ripped through Fultondale in nearby Jefferson County. It killed one person and injured several others.

The very next morning, the women at Desperation Church started coordinating their response to use their tithing time to help those who lost their homes.

Krysti Shallenberger is a freelance writer and communications specialist based in Alabama. Her audio work has appeared in NPR, All Things Considered, Here and Now, Alaska’s Energy Desk, and KYUK. Her written work has appeared in Audubon, Deutsche Welle, Utility Dive, KYUK News, Alaska Public Media and E&E News. Contact her at krystishallenberger@gmail.com.

This story was supported by the Turner Center at Martin Methodist College.