The president promised to create a task force on how best to help the communities. Advocates want that and new jobs, broadband internet and funding for health and education.

This story was originally published by Inside Climate News.

Thirteen groups from areas as diverse as West Virginia and Kentucky in Appalachia to the Navajo Nation in Arizona, along with their national partners, want the immediate creation of a White House Office of Economic Transition, focused  on rebuilding the economies of coal communities.

They also asked the administration last week in a letter to create a task force on communities dependent for jobs on coal and power plants.

“What we are saying is we recognize the inevitable shifts in the energy economy landscape as a result of the measures we must take to address climate change,” said Peter Hille, president of the Mountain Association, a nonprofit that serves counties in the coalfield of eastern Kentucky and is working for a new economy there. “The justice we are calling for is represented by the new investments needed to help these coal-impacted communities.”

Biden entered the White House last week with the most ambitious climate agenda of any president, having put forth a $2 trillion plan that seeks to tie  curbing heat-trapping greenhouse gases with economic growth in renewable energy sources like solar and wind power.

On his first day,  the president moved to rejoin the Paris climate accord and directed his administration to review and begin rolling back more than 100 rules on the environment put in place by the Trump administration, many of which benefited the fossil fuel industry. Biden’s plan includes the goal of a “carbon pollution-free power sector by 2035.”

During the campaign, Biden also promised his administration would “invest in coal and power plant communities and other communities impacted by the climate transformation.” His campaign website said he would create a task force on how best to transition such communities.

What the coal state groups are doing is reminding Biden of his promises. They say that adding a voice in the White House for coal communities alongside those advocating for climate action will help to keep the communities a priority—especially as the coronavirus pandemic has accelerated the decline of the coal industry.

“The economic uncertainty facing Main Street is destabilizing local economies and governments when services and support are needed most,” the groups wrote in their letter. “In many communities, this decline is hitting historically marginalized groups the hardest, including low-income people, Native (and) Indigenous people, Black people, and people of color. These workers and communities must be a central part of the new, clean economy.

This economic collapse has begun setting off demographic trends. As the coal industry has declined, for example, West Virginia has been losing population.

“Too many people feel like they have to leave West Virginia,” said Natalie Rober, executive director of Generation West Virginia, an organization that works to attract, retain and advance young people in the state, including workforce development. “Our work is doing whatever it takes so people can find fulfilling careers here and live the lives they deserve here in West Virginia.”

There are solutions already “on the ground that can be scaled up with federal support,” she added, citing her organization’s efforts to train software developers.

The federal government could help by working with local communities to expand fast, broadband internet service to make remote learning and working accessible to more people. 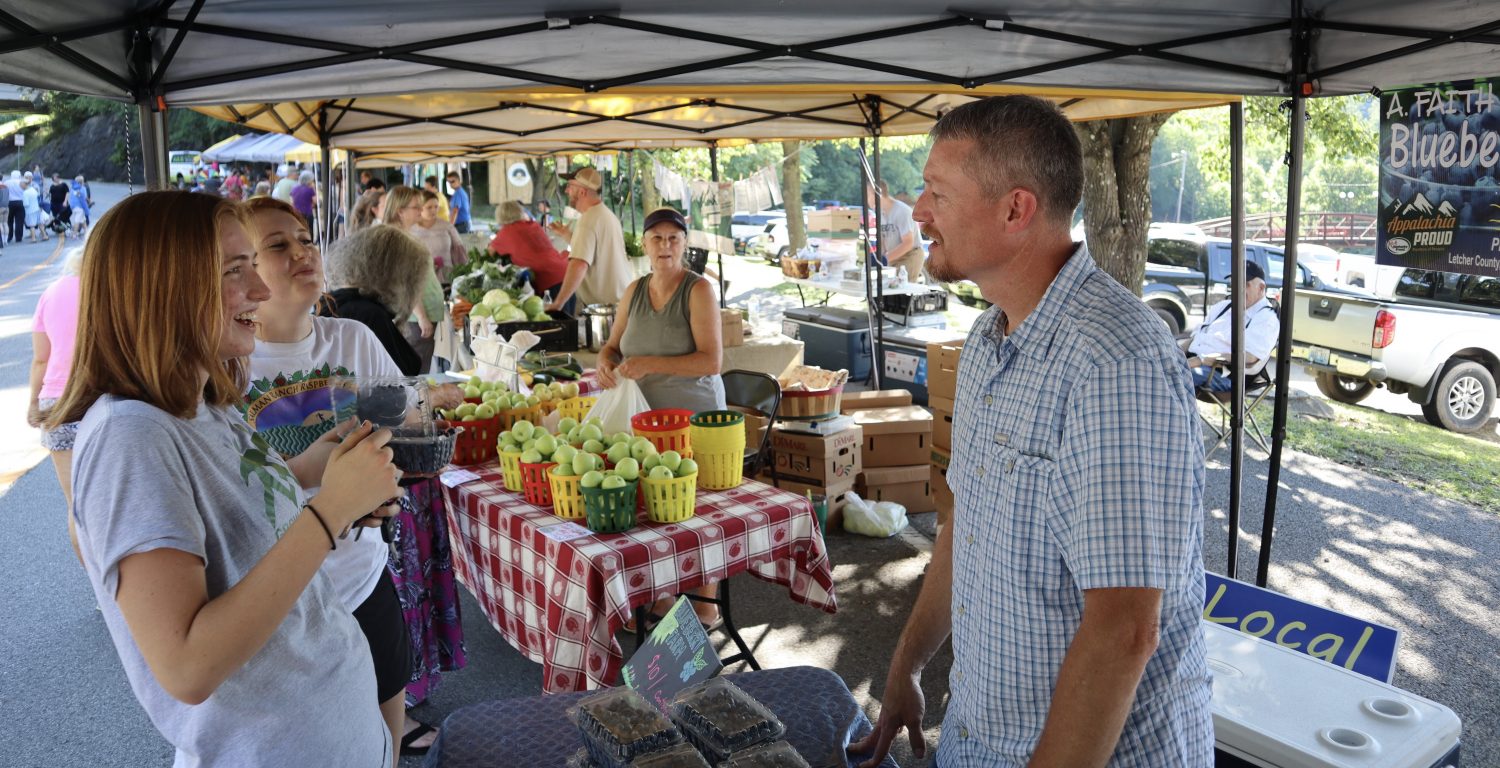 Shad Baker, who grows blueberries on reclaimed mine land, at the Whitesburg farmer’s market in 2019. Photo by James Bruggers

A spokesman for the Biden administration declined comment on the letter.
Senate Republican leader Mitch McConnell of Kentucky, contacted through a spokesman, did not respond to a question about whether a White House position on coal transition would be beneficial. In comments on the Senate floor, McConnell criticized Biden for his decision to return the United States to the Paris Agreement, and his support for global efforts to reduce carbon emissions to net-zero by 2050.

McConnell called the Paris Agreement “a terrible bargain that would set us up to self-inflict major economic pain on working American families.”
Hille said the approach by McConnell and former President Trump to slash environmental regulations and promote coal did not save the coal industry. “That approach got a good hearing and a good trial and it didn’t work,” he said. “In fact, we continue to lose jobs in the coalfields.”

Sen. Joe Manchin, the Democrat from West Virginia, did not comment on the group’s proposal for a coal transition. Earlier, in response to Biden’s initial climate moves, he said the president “must renew America’s leadership on climate change through innovation” and that efforts to address climate change “must create jobs in places like West Virginia and wherever traditional energy workers have been left behind.

Because Manchin is expected to become the chairman of the Senate Energy and Natural Resources Committee and Democrats have only a razor-thin margin in the Senate, Manchin will likely have an oversized role in any climate legislation that might come out of Congress, including legislation to help coal communities.

Kentucky’s only Democratic Party member of the House, John Yarmuth of Louisville, said he would support “a task force or a special White House office—whatever it takes to get coal communities the help they need.”

He said, “President Biden and our Democratic Congress will tackle these issues head-on” and make “the strong investments needed, and that we will be honest to the families that have sacrificed so much to power our country for generations.”

The organizations that sent the letter, including the Just Transition Fund, told Biden they had some ideas on how to support those families. They are among 80 organizations that last June unveiled a National Economic Transition Platform to support struggling coal mining cities and towns, some facing severe poverty, in Appalachia, the Illinois Basin, Montana, Wyoming, Arizona and elsewhere. Just Transition Fund drafted the plan with its partners.

The groups described their program as bottom-up economic development that builds on community members’ strengths and resources. Economic transition money has already been flowing to some of these communities, but they say much more needs to be done, as coal mining companies file for bankruptcy and the nation transitions from coal to cleaner and less expensive energy sources.

Coal production nationally was on pace last year to sink to its lowest level since the 1960s, as domestic and international demand declined, according to the U.S. Energy Administration. Hundreds of coal-fired power plants have closed and those that remain in operation are running much less often than before, and burning less coal.

“It’s pretty clear that the decline in coal use is sustained, it’s big and it’s real, and it’s coming mostly from the big drop in natural gas prices we’ve seen in the last decade,” said Catie Hausman, a University of Michigan professor whose research focuses on energy and climate policy.

The Appalachian Regional Commission has identified 78 counties across its area as economically distressed, meaning they rank among the most impoverished 10 percent of counties in the nation. Eighteen are in West Virginia and 42 are in eastern Kentucky. In Wyoming, the coal mining sector has shed tens of thousands of jobs since 2014.

Hundreds of high-paying mining and coal burning jobs were lost in the Navajo Nation with the 2019 shut down of the Navajo Generating Station, the nation’s largest coal-fired power plant, after nearly 50 years.
The groups have called on the Biden administration to, among other things, invest in local leadership and long-term economic development planning, boost local clean-energy economies and reclaim and clean up mine sites and the environment.

They would like to see the administration invest in broadband internet service and improve water and wastewater systems and roads. They want payments for workers while transitioning to jobs that can sustain their families, as well as funding for health and education improvements.
The coal communities, the groups said in their letter to Biden and Vice President Kamala Harris, “supported our country when we needed it most, and now they deserve our support when they need it most.”