Churches and other places of worship helped strike down an industry-backed ballot amendment and delay a massive plastics project.

By Sara Sneath and Carly Berlin

On All Saints’ Day, Nov. 1, religious leaders from multiple denominations gathered in a sugar cane field in St. James Parish where evidence suggests enslaved African Americans were buried. In 2018, archaeological consultants for Formosa, a company that plans to build a giant plastics manufacturing facility on the site, discovered unmarked gravesites.

Bishop Michael Duca of the Diocese of Baton Rouge said he attended the ceremony to bless the graves — as is tradition the day after All Saints’ — and to make residents who have protested the proposed plant feel heard. “Caring for the earth is about caring for our brothers and sisters in Christ,” he said. “You’re not just building on so many acres of sugarcane. This is their home.”

Duca was among the clergy invited to the ceremony by Sharon Lavigne, a St. James Parish resident who created the grassroots organization Rise St. James in an effort to stop Formosa from building near her house. Lavigne said it was important for religious leaders to see what is happening in her community. “I’m hoping that they can pray with us and help us to solve this problem,” Lavigne said. “That’s what I asked them to do when we were at the gravesite. I asked them to join forces with us.”

Clergy have played a strategic role in bringing conviction and community to environmental justice causes since the movement began in the 1980s, informing people about the disproportionate effects pollution has on communities of color and rural areas. This year in Louisiana, places of worship have served as physical and theoretical places for people of diverse backgrounds to meet and strategize to achieve two recent environmental victories.

On Friday, the U.S. Army Corps of Engineers suspended its permit for the proposed plastics plant while the Corps re-evaluates certain aspects of the permit. Residents and environmentalists challenged the Clean Water Act permit on several counts, including the Corps’ failure to protect the burial sites. While the origins of the gravesites have not been verified, archaeologists found evidence that they may be the graves of enslaved African Americans who labored on the Buena Vista Plantation, built in the mid-1800s. Formosa has said it will work with Louisiana to identify the remains and respectfully rebury them in a cemetery.

“[Formosa] is disappointed with the Corps’ decision to temporarily suspend the permit during its re-evaluation,” said Janile Parks, the company’s spokesperson. “[Formosa] expects and sincerely hopes the Corps will handle this matter in an objective, impartial, and expeditious manner so the permit analysis will be even stronger once the re-evaluation of the analysis is complete.”

Major construction for the plastic plant was put on hold until February 2021 due to the COVID-19 pandemic. The permit suspension means the company cannot clear, grade, or excavate near the Mississippi River levee until the Corps has made its decision to reinstate, revoke, or modify Formosa’s permit. In a court filing, the Corps said it is re-evaluating the company’s consideration of other locations to build the plant, and previously eliminated five alternate sites in Ascension Parish based on false information. 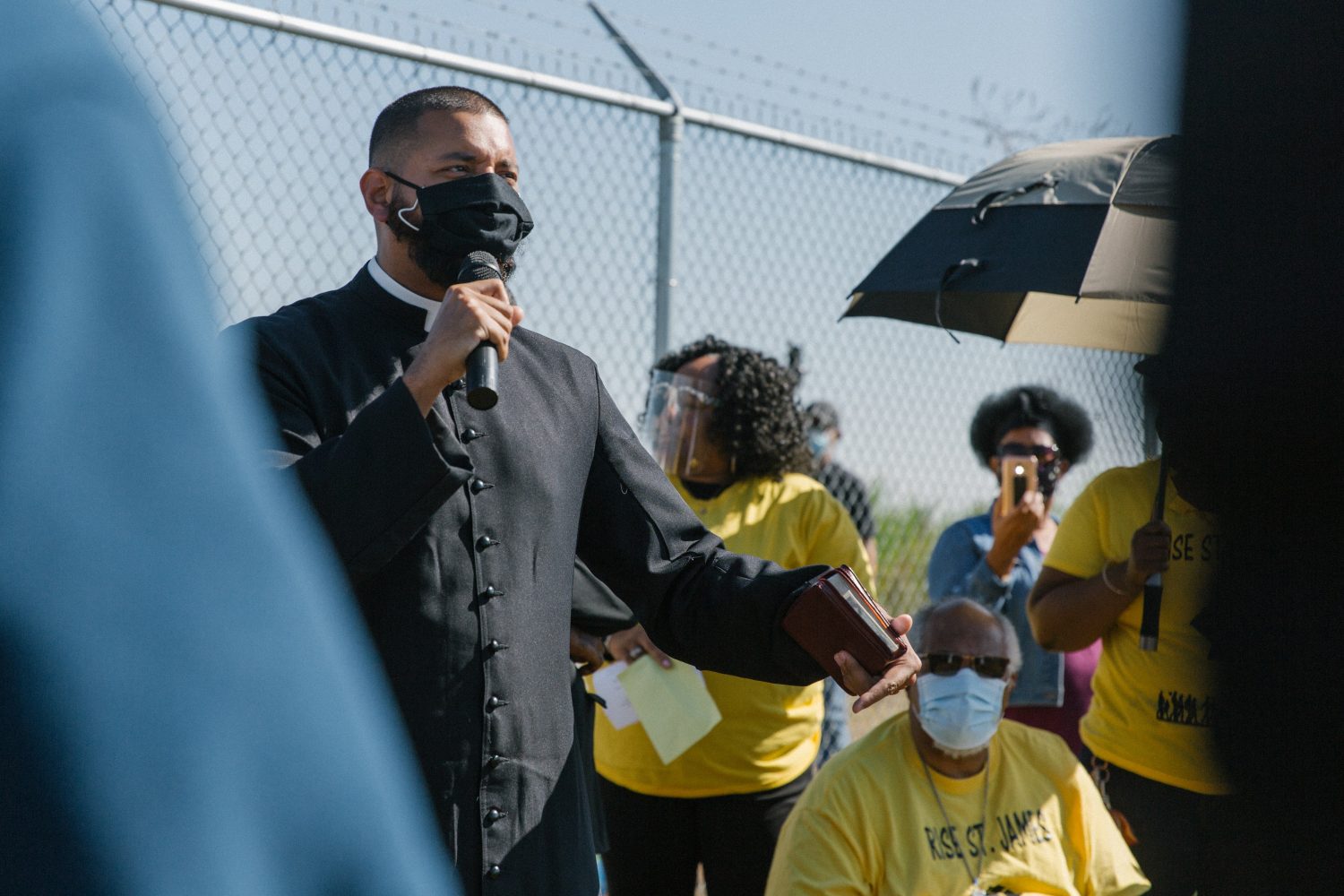 Father Joshua Johnson of the Diocese of Baton Rouge on All Saints’ Day. Photo by Bron Moyi for the Louisiana Bucket Brigade

Pastor Harry Joseph, of the Mount Triumph Baptist Church in St. James Parish, attended parish council meetings to question the permits after one of his parishioners was diagnosed with cancer. “My people were suffering from this,” he said. “So, I needed to get more involved.”

Joseph is a member of Rise St. James, a faith-based organization that advocates for racial, social, and environmental justice. He said that the Corps’ decision to suspend Formosa’s permit was the group’s biggest victory so far. “Hopefully that will stop Formosa from wanting to build here,” he said. He plans to continue to fight for the health of his community. A ProPublica analysis found that the facility would double the level of cancer-causing air pollutants in the area. “As leaders, if we can’t walk out and get in good trouble we got the wrong calling,” he said.

“I’ve been doing this for 40-plus years and I’ve seen people who are sustained by their faith,” he said.

Faith leaders help make the connection for parishioners between good stewardship of the earth and spirituality, he said. Pastors build community and create a meeting space. “The pastor is the shepherd of the flock and that person is the watchful person who is keeping a good eye out for any dangers,” Bullard said.

Environmental racism affects public health, housing and food security, said Rev. Emily Carroll, of Shady Grove United Methodist Church in Mansfield. Working toward environmental justice, or the equitable distribution of environmental benefits and burdens, is a way to empower people, she said. Environmentalism has been a part of Carroll’s ministry since she studied in seminary.

She spoke out against an amendment on the Nov. 3 ballot that would have amounted to a massive tax break for manufacturers, allowing companies to negotiate lower tax bills with local governments. Carroll said she was concerned it would take much needed resources away from her community. “We should be pushing and preaching what we should do to make life better for our parishioners,” she said. 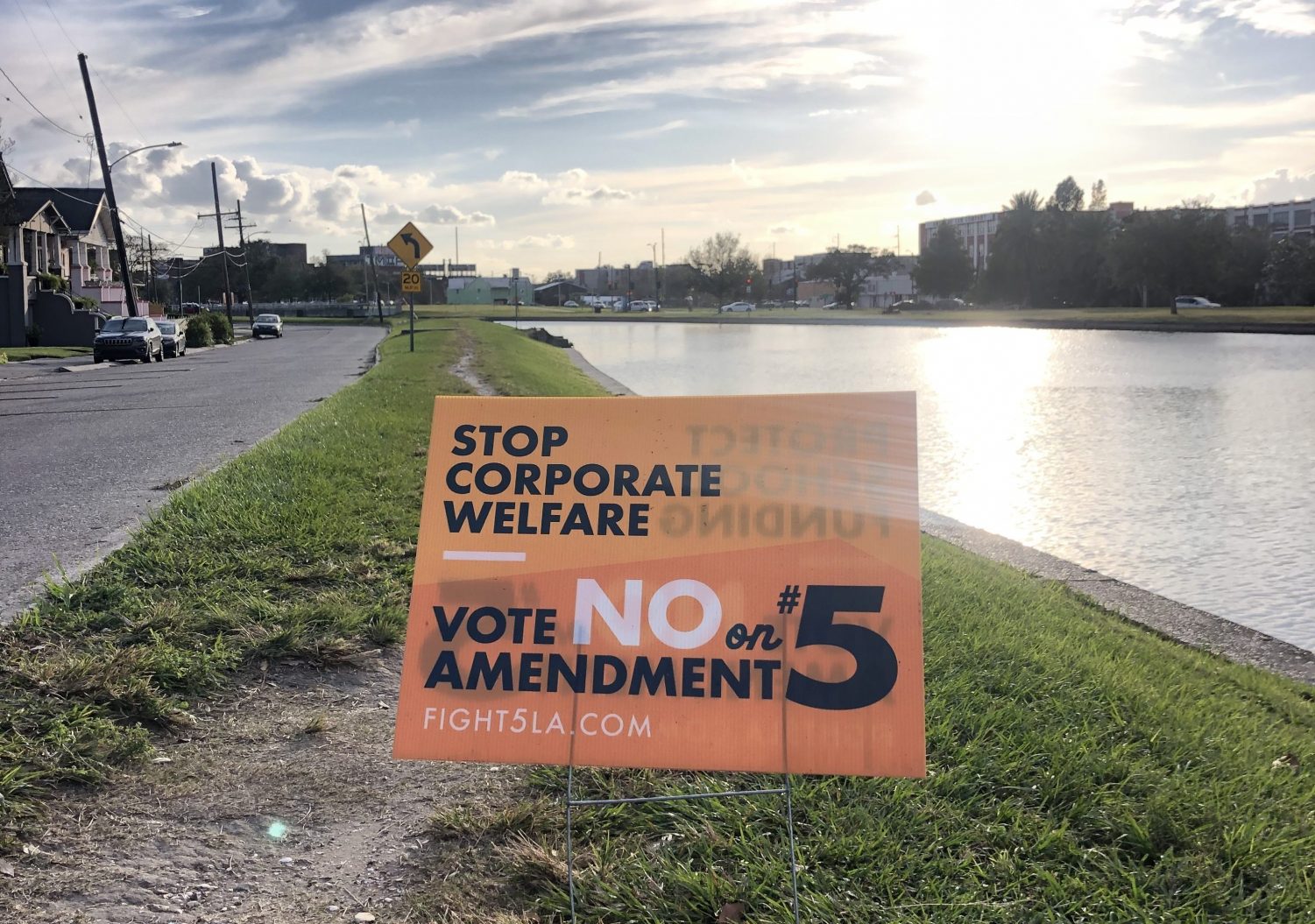 A sign about Amendment 5 along Bayou St. John. Photo by Carly Berlin

Together Louisiana, an interfaith network of over 250 religious and community groups, was instrumental in defeating Amendment 5. Over the past four years, the group has emerged as a vocal critic of Louisiana’s Industrial Tax Exemption Program (ITEP) — a state program that offers tax breaks and exemptions for manufacturing facilities — deeming it “corporate welfare.”

The coalition’s strategy hinged upon robust public education campaigns. Shawn Anglim, pastor of First Grace United Methodist Church in New Orleans and longtime member of Together Louisiana, said the group informed local municipalities and residents about the massive tax breaks for industry at the expense of communities. According to a 2018 analysis by Together Louisiana, many coastal, industry-heavy parishes lost millions of dollars in tax revenue because of the exemption; for instance, Cameron Parish lost $618 million that year.

“We educated, basically, going from City Councils, to Sheriffs, to school boards to teachers unions, helping them understand that their money has been given away for decades,” Anglim said.

When state legislators approved Amendment 5 in June, Together Louisiana organizers saw yet another chapter in a long story of industry lobbyists and sympathetic lawmakers attempting to cheat communities out of local tax dollars. “It enables the people who are doing the polluting to get a tax break,” said retired Lieutenant General Russel Honoré, once the commander of Joint Task Force Katrina and now an environmental advocate involved with Together Louisiana. The group worried the amendment would cut funding for public schools and shift the tax burden onto residents.

They mobilized quickly. Together Louisiana already had a system in place to boost voter turnout this election cycle: A statewide network of block captains periodically checked in with neighbors to make sure each had a voting plan. Block captains began informing voters about what the confusing language of Amendment 5 actually meant — and what the stakes were for their communities.

Carroll, who served as a block captain, said the language was purposefully confusing. “That amendment was like three lines with no commas, semicolons. It was a huge, long sentence,” she said. “I feel like it was convoluted intentionally.”

Together Louisiana hosted Zoom meetings every Thursday in October to convey the costs and consequences of the amendment, which hundreds of people attended. Other groups took up the mantle, too: teacher’s unions, local tax assessors, and environmental groups encouraged Louisiana voters to vote no, as did Rise St. James, which held a march last month.

Rev. Jay Angerer of All Saints’ Episcopal Church in River Ridge was looking for ways to fight for environmental justice and first plugged into the Amendment 5 campaign through a virtual meeting. “I probably wouldn’t have been involved in Together Louisiana if it hadn’t been for the pandemic and Zoom,” he said. Stunned at the prospect that companies could negotiate their taxes, he attended meetings and helped people practice their elevator pitches about the amendment, challenging them to speak to five, 15, or 50 people about it.

Angerer took his pitch to his congregation. Whenever they had a Bible study or adult education class, he spent a minute or two telling church members about the amendment. “The Bible speaks frequently about issues of justice, in the Old Testament and the New Testament,” Angerer said. “People who are in power, and the church, are tasked with the responsibility of making sure that the orphans, the widows and the strangers of society, the outcasts, [and] the marginalized are protected.” 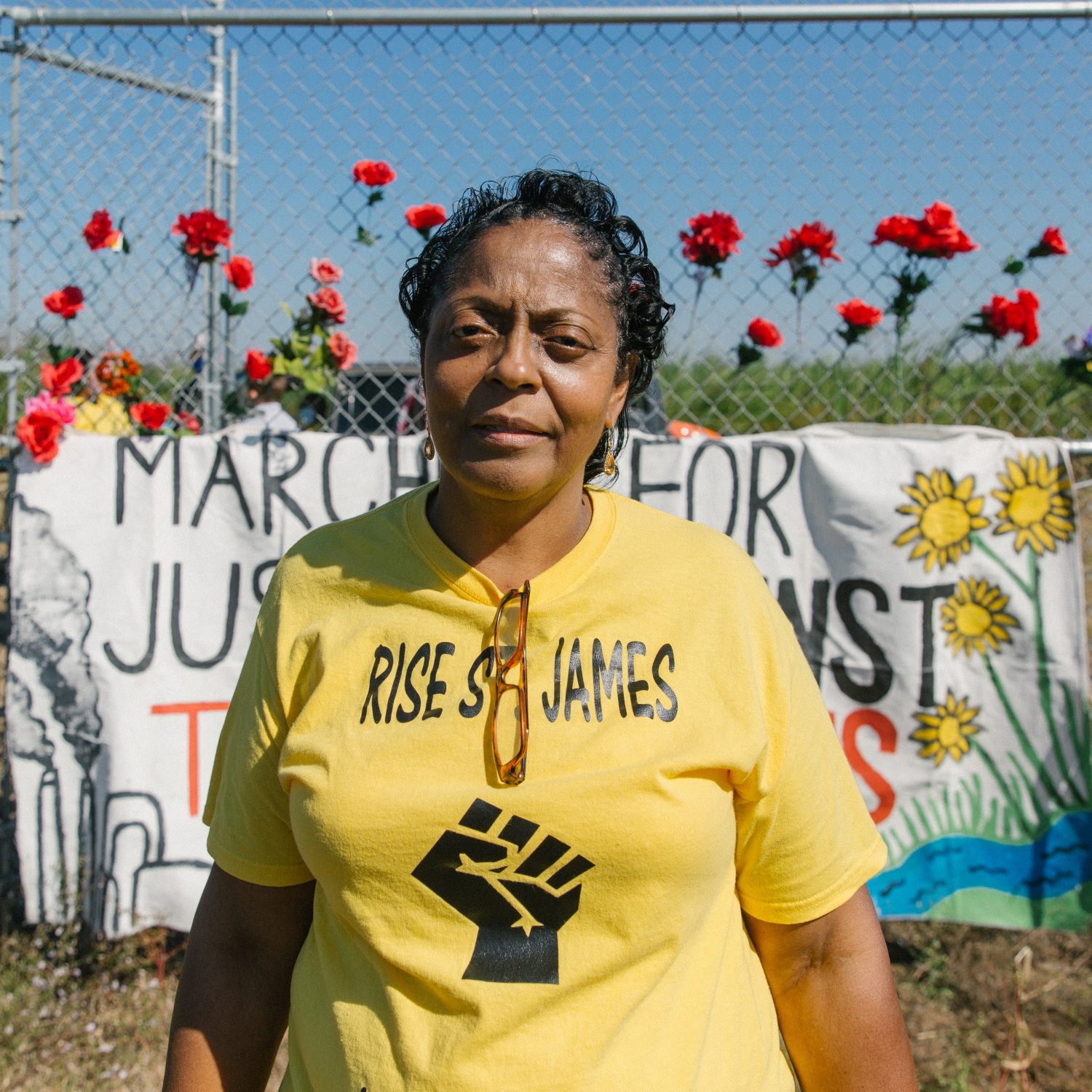 These efforts paid off. By an overwhelming margin, every parish in the state — even those that are typically GOP strongholds — voted it down. There was a significant discrepancy between how legislators and their constituents voted: 114 state lawmakers voted in favor of putting the amendment on the ballot, with only 20 voting against (10 were absent for the initial vote). But all 144 districts rejected it in November.

Anglim, from First Grace, was buoyed by the success. “This was overcome by a bunch of church people!” he said. “The number one comment from those precinct captains was ‘what’s next?’ These people had a very powerful experience. They helped people vote, they helped inform people, and they had a strategy for using their power for the common good. That worked.”

Anglim and Honoré both said they expect state legislators to try to pass legislation similar to Amendment 5 in the coming year, and will rally against it.  Angerer, from All Saints’ Episcopal Church, is also inspired to keep up the work.

“My church is eleven feet from the Mississippi River,” he said. North of River Ridge, Black and brown communities live closest to petrochemical facilities on what was once plantation land. “We are a couple miles south of Cancer Alley, and the water flows towards us. I’d have my head in the sand if I didn’t think that eventually our part of the river is going to also become part of Cancer Alley.”

Borrowing from the book of Joshua, Angerer said, “Someone needs to blow the horn, you know?”

This story was supported by the Turner Center at Martin Methodist College.