For more than a decade, Theresa Dardar has kept watch over a trainasse, which means “ditch” in Cajun French, in the marshland near one of her tribe’s sacred mounds. There are more than a dozen of the 10 to 15-foot tall earthworks in her community in southern Terrebonne Parish, Louisiana. While some of them served burial or ceremonial purposes for her ancestors, this particular large, oblong mound provided elevation upon which four families once lived.

Dardar, an elder citizen of the Pointe-au-Chien Indian Tribe, said the trainasse, which used to be bordered by tall marsh grass, has opened up from three feet wide to more than 30 feet wide in the last 20 years — wide enough to begin to wash away the mound.

Since the 1920s, coastal Louisiana has lost more than 2,000 square miles of wetlands — an area slightly larger than Delaware — to open water. These losses have affected not only the Pointe-au-Chien Indian Tribe, but other coastal Native communities including Grand Bayou Indian Village in southern Plaquemines Parish and the Grand Caillou/Dulac Band of Biloxi-Chitimacha-Choctaw. The proliferation of man-made canals, most of which were opened up to access oil wells, have altered the wetlands they have called home for generations, allowing the rising Gulf of Mexico to swallow them up.

“Some of our sacred spaces are gone, never to be above the water again,” said Shirrell Parfait-Dardar, traditional chief of the Grand Caillou/Dulac Band of Biloxi-Chitimacha-Choctaw. “Our whole identity is being washed away.”

In an effort to preserve what’s left, Parfait-Dardar, along with Theresa Dardar, Rosina Phillipe, a citizen of the Atakapas-Ishak/Chawasha, and other members of the First People’s Conservation Council, have joined forces with coastal scientist Dr. Eugene Turner from Louisiana State University and the nonprofit Lowlander Center to pursue a restoration project. The project, which the group calls “Lagniappe for the Working Coast,” is informed by Indigenous knowledge of the landscape. It aims to protect at least 15 different tribal mounds along the coast through a strategy called backfilling, which Turner describes as “knitting [the wetlands] back together the way they were [before] they were torn apart.”

An abandoned oil canal that was supposed to be backfilled by ARCO Oil & Gas Co. Photo courtesy of Healthy Gulf

Louisiana is home to a fifth of the country’s oil refining capacity and supplies a quarter of its natural gas. When fossil fuels were first discovered under its coastal wetlands in the 1930s, no laws existed to protect these ecosystems. More than 50,000 oil wells were eventually permitted in the state’s coastal zone; in order to access them, companies dredged about 10,000 miles of canals that can be 13 to 16 feet deep, and piled the displaced earth on either side. Some of these “spoil levees” or “spoil banks,” are up to 12 feet tall. Turner said they’d wrap three-quarters of the way around the equator if they were laid end to end.

The Clean Water Act requires oil and gas companies to repair environmental damage done to drilling sites, but depleted wells and canals are often abandoned. According to the Louisiana Department of Natural Resources, the state’s coast had more than 27,000 permitted drill sites classified as “plugged or abandoned” as of 2017. The canals near the sites pose serious threats to wetland ecosystems, as well as the tribes who call the region home. In a healthy marsh, shallow water sheets out over cordgrasses and meanders in thin waterways, unobstructed, allowing aquatic life to travel safely to and from breeding sites and feeding grounds. But spoil banks dam the flow through a process called impoundment, creating reservoirs of stagnant water. From above, the Louisiana coast looks like a giant’s game of tic-tac-toe. The long, straight canals criss-cross, locking up pockets of marsh and creating a geometry of diamonds and triangles and squares.

Storm surge from the Gulf of Mexico gets trapped in these pools, which become increasingly saline, or salty, as the water heats and evaporates over time. This causes plants and animals specially adapted to a freshwater environment to die. Root systems on the edge of the canal suffer, too, and as they deteriorate, the earth they held in place falls away. Some canals double their width in just five years. According to one of Turner’s studies, for each hectare — just over two acres — of canal dredged over a 34-year period, 2.85 hectares of land disappeared. But where there are little or no canals, there is little or no land loss.

“It’s like cancer in a body,” said Philippe, of the Atakapas-Ishak/Chawasha tribe. She is among the few remaining citizens of her nation that still live in their ancestral community of Grand Bayou Indian Village; most others have moved away due to land loss. “And it has spread throughout the entire body. You start with two parallel canals, and then the land between them erodes away, so what was once two parallel canals has become one large, open body of water.”

As sea levels rise, open bodies of water rapidly overtake what remains of coastal tribes’ sacred earthworks. Chief Parfait-Dardar said that some have already sunk. “We’re lucky the elders still remember where they are, so we can pass over them by water,” she said. “But they’re all at risk of sinking.”

The restoration project team wants to save the remaining mounds. After years of conversation and planning, tribal representatives, Turner, and support personnel from Lowlander Center and the nonprofit LiKEN, which facilitates collaboration between communities and scholars, have identified more than 15 priority sites scattered throughout the 60-mile expanse of wetlands that encompass their different ancestral communities to protect through a process called backfilling, which involves carefully knocking spoil banks back into the canals. If they’re more shallow, marsh plants can put down roots, helping reverse the effects of impoundment.

“This is something that was already known by our people,” said Chief Parfait-Dardar. “It’s common sense, really. If you’re going to cause damage, you need to repair it.”

By looking at drilling permit records from 1900 through 2017, the team has started to identify all dry wells within five kilometers of the priority sites. Turner provides consultation as needed on best practices for backfilling in different areas. Dardar, of the Pointe-au-Chien Indian Tribe, said that unlike other scientists, Turner respects the tribes’ traditional knowledge.

“I want to help, so I offer whatever information I have,” said Turner. “But I’m not demanding it.” He added that he has utmost regard for the technical proficiency required to erect the earthworks thousands of years ago. “There’s an underlying construction intelligence to them,” he said. “They were not easy to build.”

The team is seeking funding to start initial steps including reaching out to landowners, pursuing state permits, and applying for half a dozen grants through nonprofit agencies and federal programs. Dr. Julie Maldonado, a member of the planning team with LiKEN, said that “it’s challenging to get funding for the whole project, which ends up forcing communities to piecemeal, which takes more time and more capacity.”

Louisiana’s 2017 Coastal Master Plan outlines half a century worth of major projects like  sediment diversion, reef restoration, and flood control — many of which will take years to complete. The Coastal Protection and Restoration Authority of Louisiana (CPRA), which oversees the plan, has prioritized controversial land-building projects like the $1.4 billion Mid-Barataria Diversion. Some scientists, including Turner, believe it could decrease part of the receiving watershed’s resilience to hurricanes. But the plan has no provisions for backfilling.

Stuart Brown, CPRA’s strategic planning assistant administrator, said that while the word “backfilling” is absent in the plan, “small scale hydrologic restoration is consistent with [it],” and that future drafts will make that more clear. “It’s not that anybody has a negative view on a particular [restoration] technique,” he said. “It’s just that there’s a lot more need out there than there is money.”

However, tribal members say the backfilling project is doable because it is inexpensive and has immediate impacts. A 2018 paper Turner co-authored estimates that, at approximately $12,224 per hectare of canal, it would cost $335 million to backfill all the abandoned canals in Louisiana’s coastal zone —  a mere 0.67% of the $50 billion Plan. Brown said the costs would be higher: For instance, a 2016 project in the Jean Lafitte Historical Park cost $8.7 million to backfill 16.5 miles of canals. But a significant portion of the cost of that project went towards paying for a full year of planning and monitoring — tasks the tribal representatives have already begun to undertake on a volunteer basis. 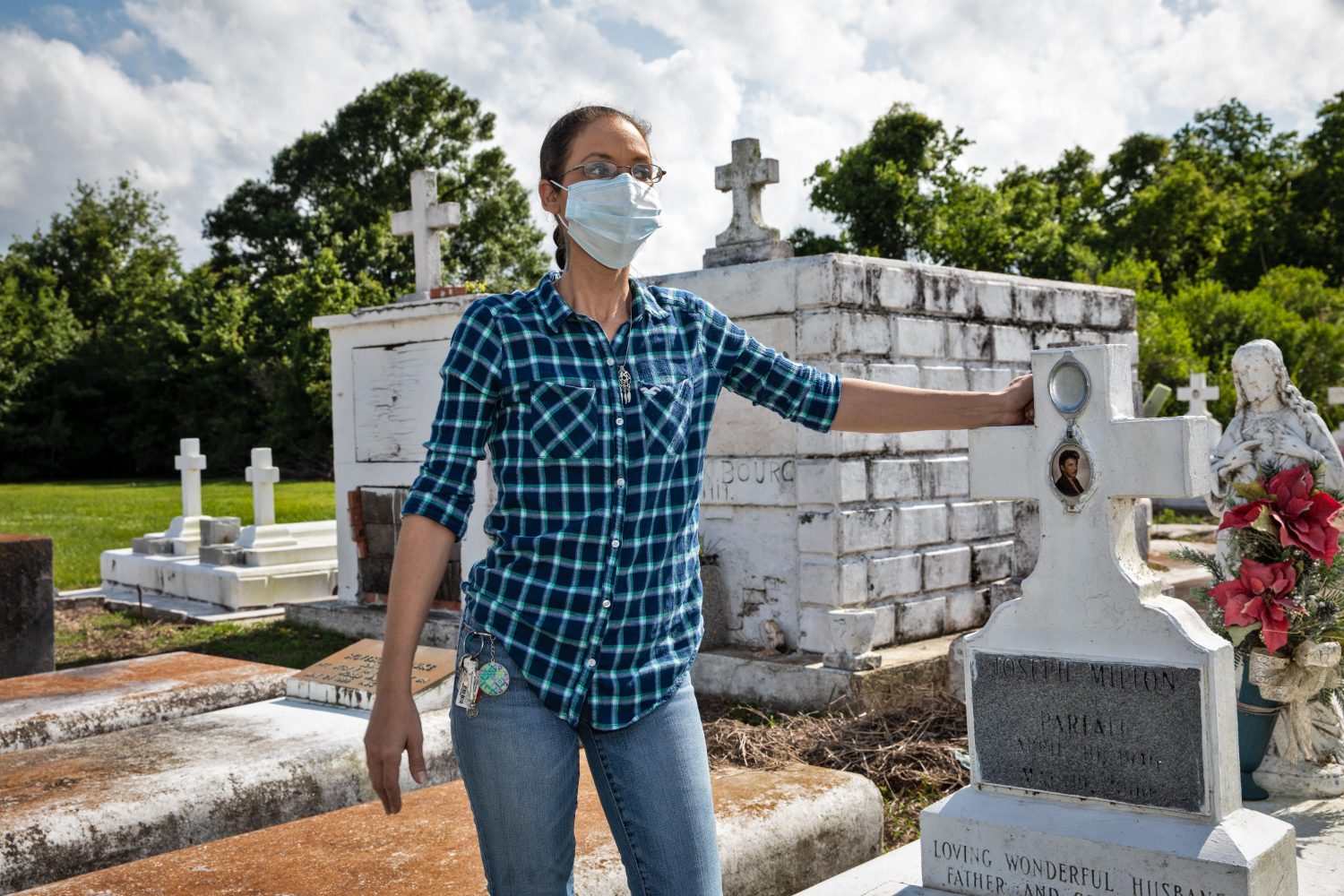 Traditional Chief Shirell Parfait-Dardar of the Grand Caillou/Dulac Band of Biloxi-Chitimacha-Choctaw Tribe, at her father’s grave in Dulac, Louisiana. Photo by Julie Dermansky

Philippe, citizen of the Atakapas-Ishak/Chawasha, said the state’s approach to restoration stems from a failure to grasp the bigger picture when it comes to marsh health. “It’s not just ‘land’ that we’re restoring. We are restoring habitat,” she said. “There’s a plethora of life besides human life that’s dependent on these places — the microscopic life, the insect populations, the mammals, birds, nesting birds, the marine population— all of these are dependent on the land that we restore.”

Funding for backfilling projects like this could depend on how the state rules on a number of environmental lawsuits looking to hold the oil and gas industry financially accountable for damage done to the coast. Oil and gas industry lobbying groups are condemning the lawsuits, and the state legislature passed a resolution in May urging parishes to dismiss these suits, calling them “unproductive.”

“The government has chosen oil companies over people,” said Devon Parfait, a citizen of the Grand Caillou/Dulac Band of Biloxi-Chitimacha-Choctaw. At 22, Parfait is the youngest member of the restoration project team and the most likely to see how the backfilling measures play out over his lifetime, as sea levels in the Gulf of Mexico could rise anywhere from one to six-and-a-half feet by the end of the century. In his view, the tribe’s outlook would improve if the industry took responsibility for the land they’ve extracted from.

This ethos is what’s lacking, said Philippe, in most conversations about restoration with people not intimately tied to the environment. “They just see it as a resource,” she said. “But you are dependent on this resource. It’s not dependent on you.”

Christine Baniewicz is a queer writer, educator, and theater artist from Louisiana. She’s contributed to Lafayette’s The Current, TruthOut, and This Week in Palestine. She received her M.F.A. in Nonfiction from the Creative Writing Workshop at the University of New Orleans. She currently lives in upstate New York.