Laine Lewis was returning home after collecting honeycomb from a friend’s beehive on the last day of May when she noticed clouds of tear gas drifting over the bridge crossing the French Broad River in Asheville. She got out of her car and ran over to the crowd — filled with locals protesting the killing of George Floyd by Minneapolis police —  and found several street medics tending to the injured. “I went home that night, logged onto my Facebook, and posted ‘we need water and first aid supplies.’ “I knew it was going to happen again the next night,” she said.

Lewis and Mary Williams, a wilderness first responder enrolled in prerequisite courses for nursing school, set up an organized medical response station in an alleyway in downtown Asheville. Since the Civil Rights Movement, volunteer street medics, who are often medical professionals or first aid practitioners, have shown up at protests to treat those suffering from injuries, tear gas, and other uses of force.

During the protests, Williams said she heard rubber bullets, flash grenades, and tear gas exploding in the distance. She treated a woman with glass shards piercing her hands and another shot in the torso by a tear gas cannon at point blank range. One veteran told her he had never seen so much chaos in his entire life, even while stationed in Baghdad.

At the station, Williams, Lewis, and others used water to wash tear gas out of people’s eyes, treat other injuries, and hydrate them in the intense heat. Then, on June 2, minutes after a city-wide curfew went into effect at 8 p.m., the Asheville Police Department approached the triage station dressed in full riot gear. Although essential workers — including medics — were allowed to stay out past curfew, Williams said she panicked when she heard the thunderous echo of officers marching towards the alley. The group put their hands in the air and chanted in unison: “Medics, medics, medics.” But she said officers pointed their guns and yelled for them to get out anyway.

A video taken by the Asheville Citizen Times showed police ramming into protesters and destroying supplies. Using their riot shields to form a circle around their colleagues, they stomped on dozens of water bottles and stabbed them with knives. Police Chief David Zack issued a statement on Facebook the next day, saying that officers did so because they could “be thrown at protesters and law enforcement,” and that they were searching for explosives. He later issued an apology.

Days later, the same tactic was used by police in Louisville, Kentucky, when officers destroyed milk jugs and water at a protest in honor of Breonna Taylor, a Black woman killed in March by police who raided her apartment while she was sleeping.

To me, and to and other activists and researchers who have lived near the U.S./Mexico borderlands, these actions felt hauntingly similar to actions by Border Patrol agents with U.S. Customs and Border Protection in the Sonora-Arizona borderlands, who often destroy water left out for migrants crossing the border. While living and conducting dissertation research in the desert, I volunteered with humanitarian organizations like the Tucson Samaritans, dropping water off throughout the rugged mountains and deep canyons. I quickly learned to bring several gallons of water and packets of dissolvable electrolytes for myself, and to prepare emotionally to find destroyed water jugs in the Sonoran Desert, where temperatures regularly reach upwards of 110 degrees. Some jugs were scarred with animal teeth marks, but others bore neat slashes where agents likely emptied them. Some vigilante groups marked them with skulls and crossbones and the word veneno — which means poison — to discourage migrants from accessing life-saving resources. Often, we found human remains scattered within sight of the water.

The War on Drugs, from the 1970s to today, significantly contributed to the militarization of Border Patrol as well as the increasing police presence in Black communities, ballooning budgets of local police departments, and the introduction of war weapons to city streets. As the southern border became increasingly associated with drug and crime control, the Border Patrol’s authority expanded to the interior and became part of a system of federal law enforcement. This year, Customs and Border Patrol agents are being deployed to pacify Black Lives Matter protests in D.C. and Portland. Militarized border enforcement is migrating to the interior to control dissident — or disobedient — bodies. From Arivaca to Asheville, police departments and immigration enforcement agencies are armed with military-grade equipment and surveillance technology and, according to a 2014 ACLU report, trained to imagine themselves as “at war” with communities.

Author Joseph Nevins wrote in his book, Operation Gatekeeper and Beyond: The War On “Illegals” and the Remaking of the U.S. – Mexico Boundary, that destroying water is an effort to “contain the uncontainable, life itself.” Providing water, as medics and volunteers have at protests against police brutality and in support of Black lives, destabilizes and defies militarization. Water keeps people moving, connected, alive. It sustains social and migratory movements — especially now, during the heat of the summer — whether they’re on stretches of asphalt road or barren deserts.

Nearly 2 million Americans live without access to water, and tens of millions more are exposed to unsafe drinking water each year. Asheville, for instance, has a long history of groundwater contamination from industry, and there are dozens of municipalities in the broader Appalachian region where it is unsafe to drink tap water. People must purchase bottled water at the store for cooking, bathing, and drinking.

Threats to clean water, like Environmental Protection Agency regulation rollbacks and widespread pollution, have increasingly inspired protests across the country. In 2014, protesters staged “die-ins” outside Duke Energy’s headquarters in Charlotte after 39,000 tons of coal ash spilled from the utility’s facility into the Dan River in 2014. Two years later, the Standing Rock Sioux Tribe and their allies challenged pipeline construction underneath their primary drinking water source. Law enforcement in riot gear targeted protesters with tear gas, water cannons, and rubber bullets. Standing Rock was, according to University of Massachusetts Boston professor and Hunkpapa Lakota citizen Jennifer Weston, “a training ground for militarized police response [to protests].”

In the arid Southwest, across the borderlands, militarized enforcement and a lack of access to drinking water has led to the death of thousands of migrants, even as contractors extract groundwater and endanger indigenous Hia C-ed sacred sites to build President Trump’s border wall. In 2018, Max Granger, a writer and translator who lives between the Colorado Plateau and the Sonoran Desert, co-wrote part two of The Disappeared, a report that details how agents routinely and strategically slash, shoot, puncture, and hike out gallons of water left for migrants, and have criminalized people who provide them with water. 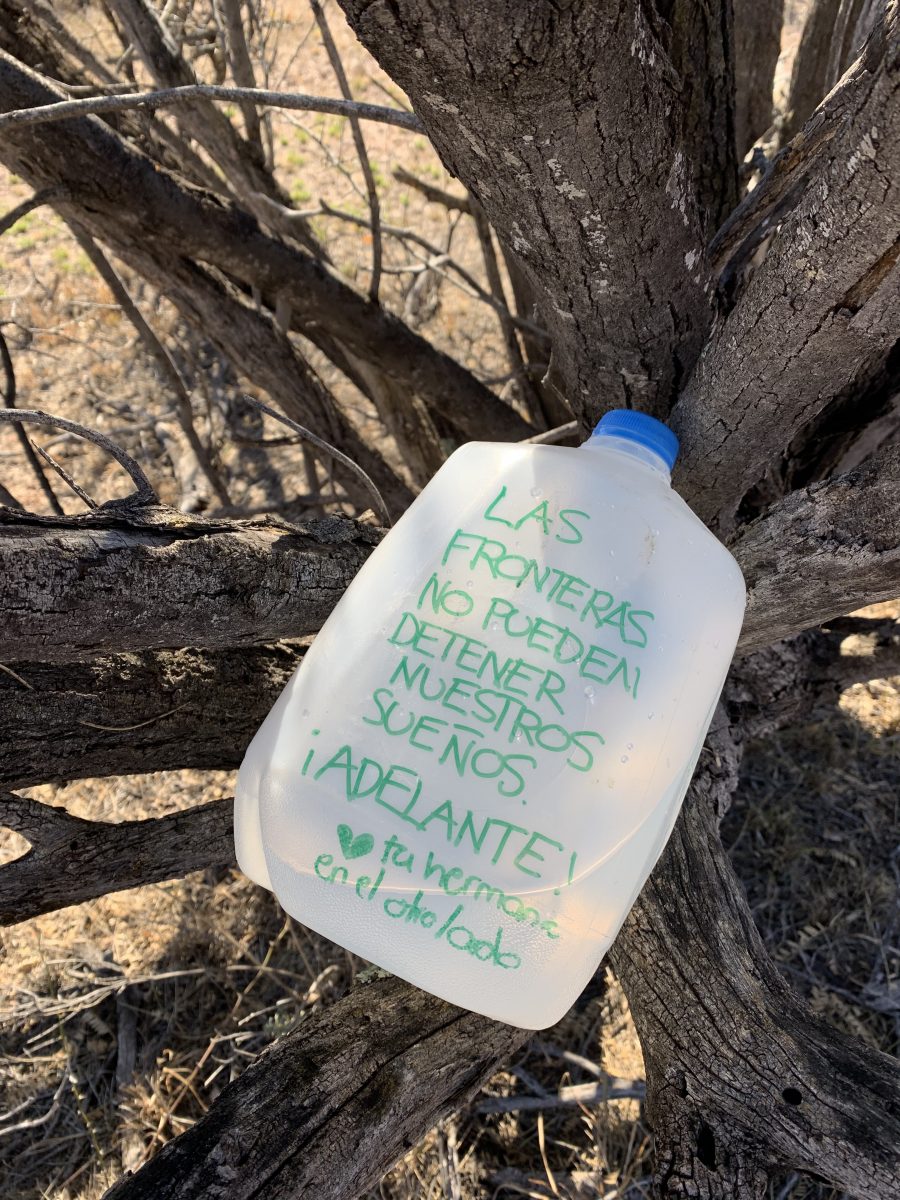 A message the author wrote for migrants. Photo by Barbara Sostaita

La polimigra — a term coined by activists to indicate the overlap between police officers and immigration officials — destroy water to weaken people physically and emotionally. In 2018, No More Deaths published video footage of agents emptying out water bottles while laughing and mocking migrants. The Border Patrol’s larger “Prevention Through Deterrence” (PTD) strategy, launched in 1994, relies on the desert’s arid climate and harsh terrain to dissuade migrants from crossing and to facilitate their capture. The agency assigned more agents in urban crossing areas and installed military-grade surveillance technology, redirecting migrants to remote areas of the desert. Limiting access to clean water is a cornerstone of PTD; the PTD strategic plan suggests that the landscape facilitates the capture of migrants, dehydrated and debilitated after “crossing through remote, uninhabited expanses of land and sea along the border [who] can find themselves in mortal danger.” One former Border Patrol agent told the nonprofit the reason for these destroying water was to “expedite [migrants’] apprehension.”

Out of desperation, some drink from contaminated cattle tanks and consume their own urine or melted lipstick in desperate attempts to survive. Granger often speaks with migrants who encounter water bottles left by aid groups. “When migrants see water in the middle of the desert, they realize that there are people who recognize what they’re doing and are trying to help them,” Granger told me. “On the flip side, from the perspective of someone crossing the border, coming across a water drop that’s slashed is such a powerful symbol of hatred. Vandalizing water symbolizes not only devaluing human life but actively working to destroy human life.”

The intentional destruction of water has not dissuaded migrants from attempting to cross the border; rather, Border Patrol abuses and the criminalization of humanitarian aid has led to renewed support and resources from allies. Similarly, after police destroyed water bottles in Asheville, Lewis said the triage group received an influx of donations and support from the community. “We were just trying to help. And the police, they radicalized us,” Lewis said. “Their militarization strategies backfired.”

On a sweltering evening last month, I attended a Black Lives Matter protest in Durham, three hours west of Asheville. Community members had set up water stations in front of bars and restaurants and hauled water bottles in wheelbarrows and shopping carts. After hours of marching, I sensed a metallic taste in my mouth — one of the initial symptoms of dehydration. Almost instantly, I found a water station. As I tipped back the paper cup, the relief reminded me that water sustains dissent and energizes movements. In the desert, we wrote words of encouragement with sharpies for migrants to continue their journeys — an  affirmation of their crossing, a show of solidarity. Thousands of miles away, this offered the same message. It was a practice of radical care.

Barbara Sostaita is a doctoral candidate at The University of North Carolina at Chapel Hill, where she studies sanctuary in the Sonora-Arizona borderlands.