All photos by Katie Sikora

For the last six weeks, a group of New Orleans hoppers — sanitation workers who ride on the backs of trucks to empty trash bins — have been on strike. They organized as the City Waste Union and are demanding better working conditions and pay during the coronavirus pandemic, including a $15 hourly wage, $150 in weekly hazard pay, proper personal protective equipment, and a fix for broken trucks they say leak hydraulic fluid.

“We are doing so much for the environment, keeping the neighborhoods clean…you don’t want to pay me for that? And not only not pay me for that, you gotta think about all the chemicals we run across. We got feces, syringes, blood, everything. On and on and on,” said Rahman Brooks, a striking hopper. “You don’t want to respect me enough to even talk to us. I know you don’t want to give me the raise but you don’t even want to talk to me? That’s degrading.” 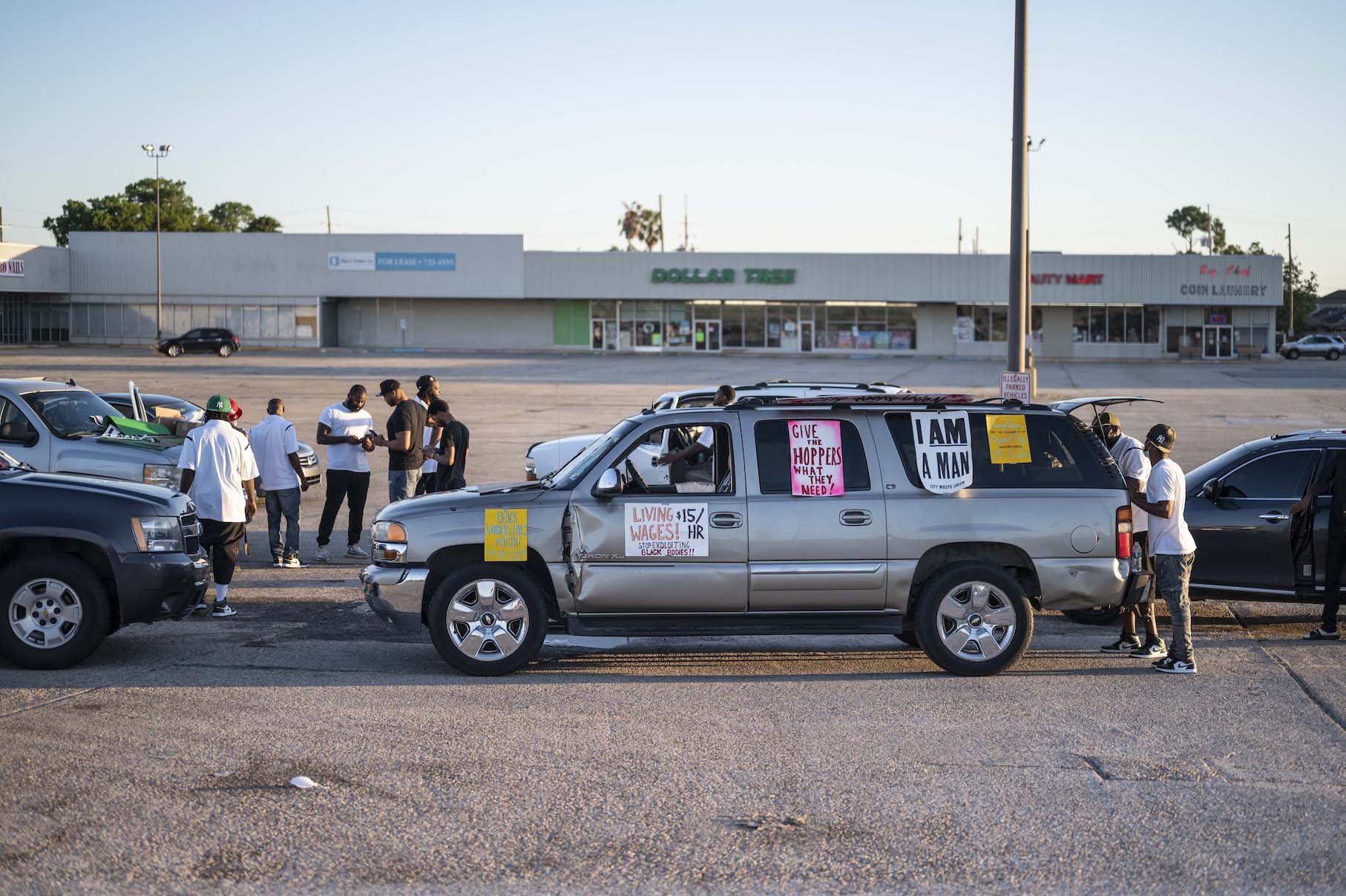 Workers gather in the parking lot of Winn-Dixie on Chef Menteur Highway after standing water from Tropical Storm Cristobal flooded the Metro yard where they were picketing.

The union says hoppers are frontline workers who are exposed to COVID-19, the disease caused by the novel coronavirus, and need more protection. While case and death numbers have decreased in New Orleans, they still risk coming into contact with garbage from infected households.

But the pandemic is just the straw that broke the camel’s back. The hoppers have long had to work grueling hours for little pay, according to the union. The Appeal reported the hoppers make $10.25 an hour working four days or less in a week, and $11 an hour if they work five days or more. The New Orleans Living Wage Ordinance requires city-contracted workers to be paid $11.19 an hour. For several days during the strike, Metro brought in prisoners on work release to try to break the picket line; they were paid even less to do the same job. 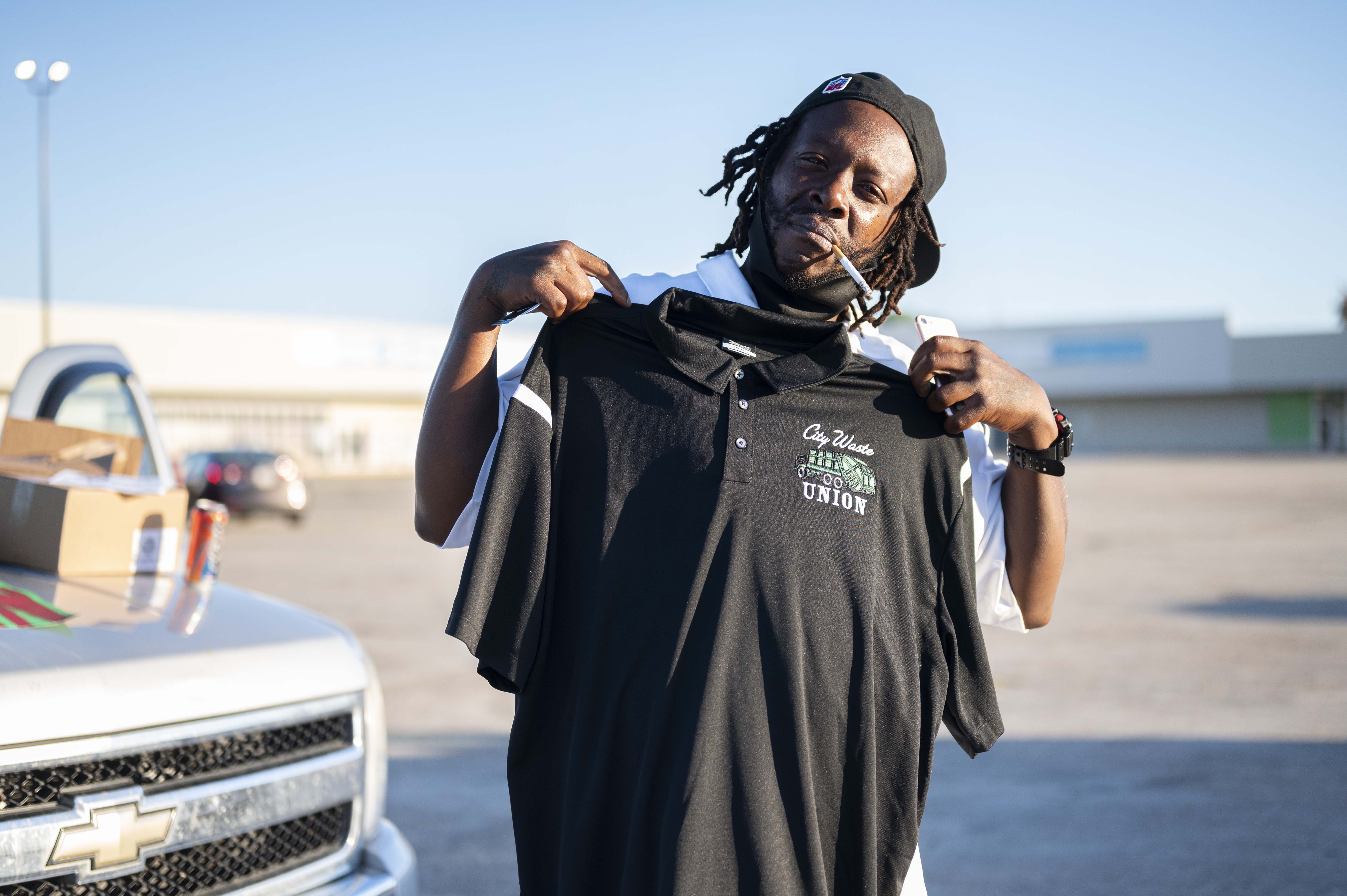 Top left: D’Artanian “Conversation” DeJean stands on the picket line. “The majority of us, we get off and finish with the garbage truck and go other places to work because it’s not enough money,” he said. Top right: “As a hopper, you go with the flow because it’s a hustle you know?” said Jerry Simon. “You make your money and if you miss a day, you’re gonna be behind on the bills.” Bottom: Rahman Brooks holds up his new City Waste Union uniform.

The striking hoppers from Metro — who are all Black — are employed by a staffing agency called PeopleReady, which works with Metro Service Group, a garbage collection company that contracts with cities across the South. In a statement to WWNO, Metro said striking workers’ complaints were “wholly inaccurate and intentionally misleading,” and that the company has provided adequate PPE for its workers. But union members say they have only received one pair of nylon gloves and one mask per week each. They refuse to return to work until Metro meets their demands. Local organizers and union members have shown up to bring supplies and groceries, and a community fund was set up to help cover their lost pay.

Almost every morning since May 5, the hoppers picket from 4:30 a.m. to 11 a.m. For the first few weeks, it was in the front yard of Metro, but moved to a nearby parking lot after Tropical Storm Cristobal flooded parts of the area. New Orleans photographer Katie Sikora has been documenting the strike. “I did not arrive on the picket line with any set agenda but to listen to these men and try to document in a way that could potentially spread their visibility,” she said. “I want the public to be able to look at these photos and come away with a greater understanding of what it tangibly looks like to fight for your rights.” 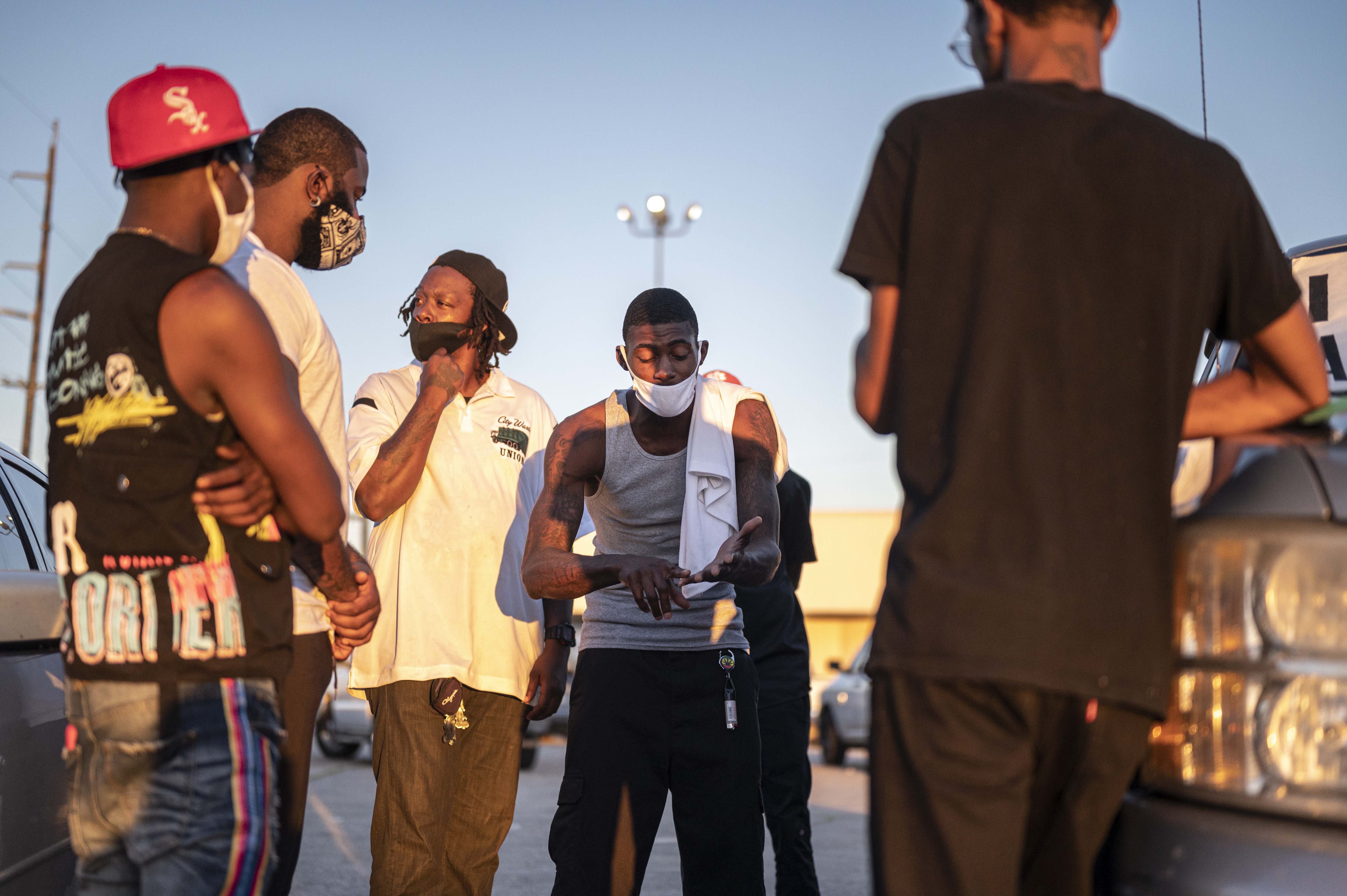 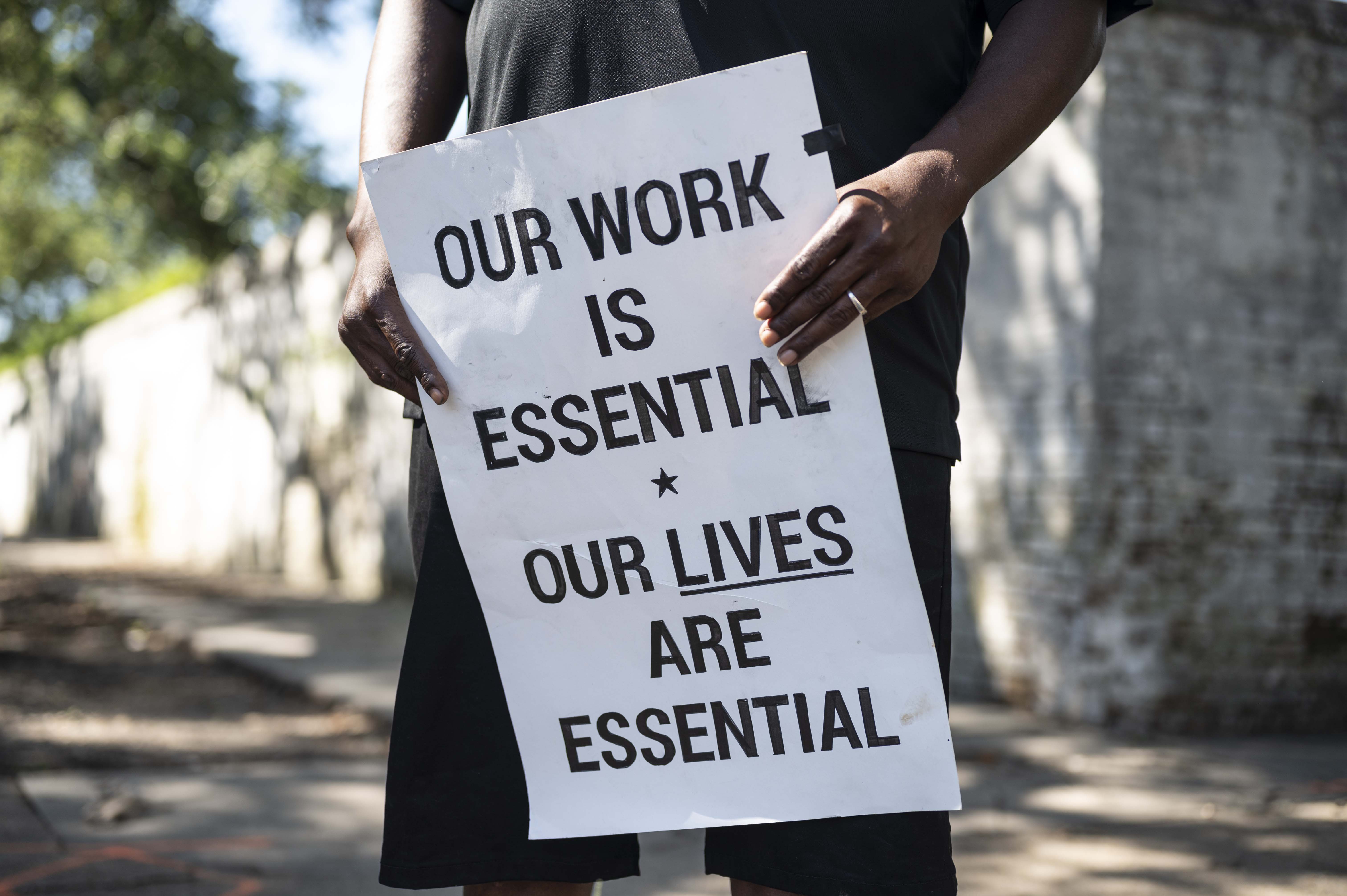 Striking hoppers from the City Waste Union join the Still Perkin’ barista strike in the Garden District in a show of worker solidarity beginning to rumble throughout the city.

They have been carrying signs with the phrase “I Am A Man,” an intentional reference to the 1968 Memphis sanitation workers’ strike, which Martin Luther King Jr. was visiting when he was assassinated. “I used to see [I AM A MAN] when I was a kid all the time, I just never thought I would be holding one of the signs,” Brooks said. “I never thought in 100 years. I am still shocked that it happened in Memphis in ’68 and 52 years later, it happens in New Orleans and I’m in it. That means a lot to me. It’s powerful. History is repeating itself and now I get to be a part of it. I am a man.” 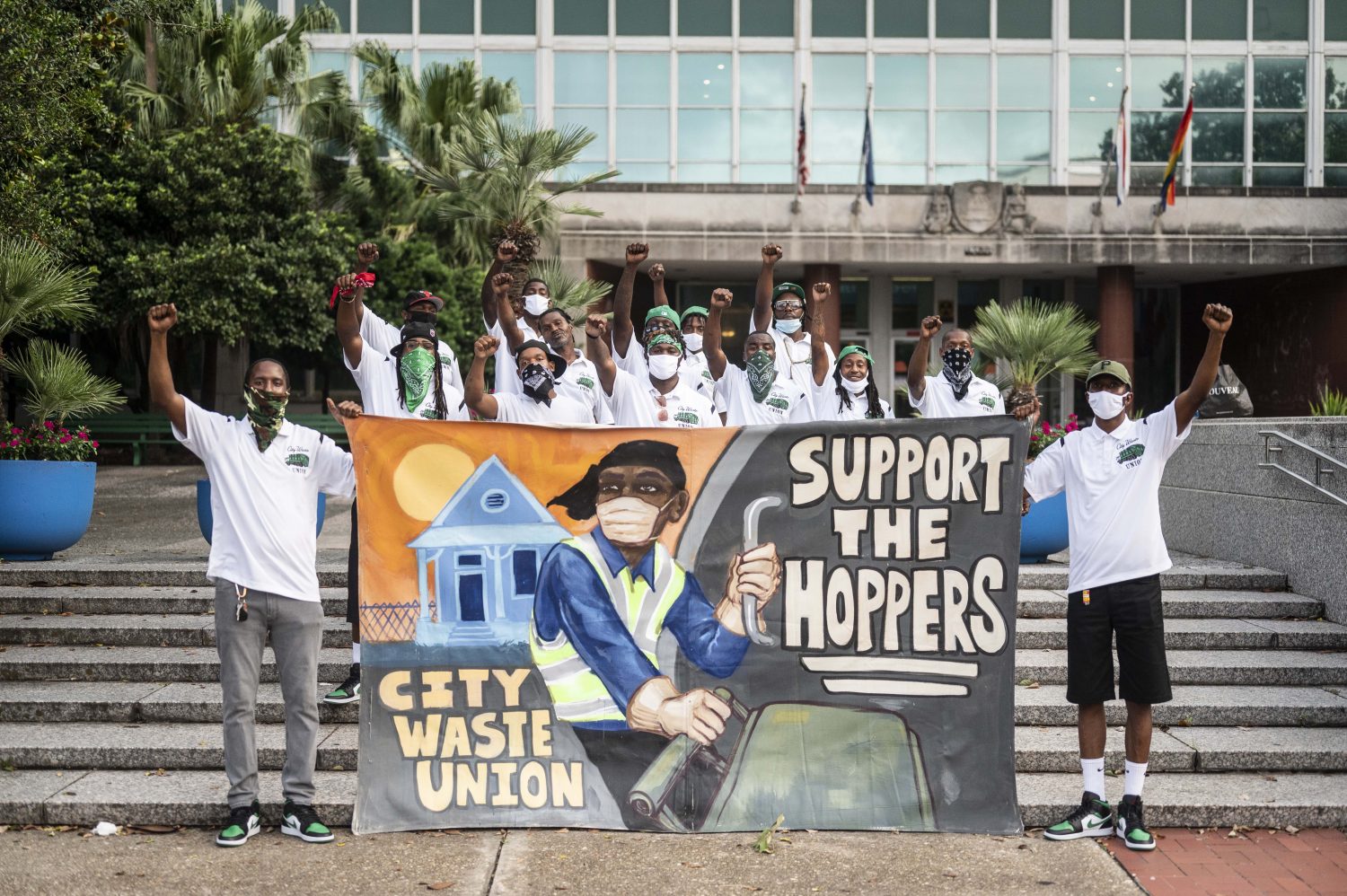 Katie Sikora is a photographer in New Orleans.