This story is the first in a series on ways communities are addressing the rise of poverty-related tropical diseases related to poor sewage infrastructure in the rural South. Read the second, third, and fourth.

When Pamela Rush flushes her toilet, the waste flows out the back of her sky blue mobile home through a yellowing plastic pipe and empties just a few yards away in a soggy pit of mud, weeds, and dead grass.

On a hot day in mid-May, Rush walked around her yard in rural Lowndes County, Alabama. Flies and mosquitoes swarmed her as she tiptoed near the pit. The smell of sewage was overwhelming.

Rush, 48, a soft-spoken woman with striking brown eyes, has straight-piped her family’s waste into her yard for almost two decades. Her home is on the edge of clay dirt road in the dense Alabama forest, miles from a municipal sewer system. Since Rush struggles with her health and is unable to work, she can’t afford the thousands of dollars it would cost to install an on-site septic system. This is her only option.

Mold grows throughout her house because of the damp, dark conditions, causing multiple respiratory problems for Rush and her two children. “I go to sleep in fear every night,” Rush said as she stared at the pit in her backyard, wiping sweat from her brow. “It don’t ever leave my mind.”

In the rural South, these conditions aren’t uncommon. Many communities from the Black Belt to Appalachia lack basic sewage and water infrastructure. In economically distressed regions like Lowndes County, it’s led to a surge in poverty-related tropical diseases often found in developing countries. Doctors and researchers have observed significant levels of parasitic infections like hookworm and toxocara and conditions for mosquito-borne illnesses like Zika and West Nile.

The risks are accelerated by erratic precipitation patterns and warming temperatures caused by global climate change. But local, state, and federal governments offer little funding to update infrastructure and local health departments have, so far, done little to address this public health crisis, forcing activists and researchers to address it themselves.

“In most countries in the Western world, it’s assumed governments will one way or another make sure basic facilities like clean running water, sewage, and sanitation are available,” said Philip Alston, the Special Rapporteur on extreme poverty and human rights for the United Nations. In 2017, he traveled to Lowndes County for a report on U.S. poverty.

“What was striking to me in Alabama was the extent to which there’s no sense that a government should be working towards providing basic infrastructure,” Alston said. “If you happen to live in one of the big cities, you will get access, but if you don’t—and particularly if you live in one of the poor counties like Lowndes—there isn’t any obligation and there are no plans in place.”

The Black Belt, named for its rich, dark soil that makes for fertile agricultural land brought white farmers, their plantations, and, forcibly, their slaves, to Alabama. In the 1960s, that same land became the foundation for the Civil Rights movement. Most of the 54-mile highway between Selma and Montgomery, where Martin Luther King, Jr. and hundreds of supporters marched for voting rights in 1965, is in Lowndes County. It is home to Tent City, where black sharecroppers lived after being kicked off their land by white farmers, and to the Lowndes County Freedom Organization, which later became the Black Panther Party.

Today, Lowndes County has a population of about 10,000 people, 73 percent of whom are black. Nearly 32 percent of people live in poverty. The once-coveted soil is now the reason many people like Rush live in dangerous conditions: the ground isn’t very permeable to water. Typical septic systems don’t work as well, a problem exacerbated by excessive rainfall.

Poverty is more concentrated and higher in the South than other areas of the U.S. According to the Census Bureau, the South has seven of the top ten states with the highest poverty rates. Slavery and Jim Crow laws created a glaring racial wealth gap that still exists today, although both black and white populations in the region have exceptionally low rates of upward economic mobility, according to the Equality of Opportunity Project.

Many of these communities, isolated in the Appalachian Mountains or the Mississippi Delta, are unincorporated and therefore lack access to municipal infrastructure or have failing infrastructure. For instance, Alabama has more than 800,000 private septic systems for people not hooked up to municipal wastewater systems. About a quarter of them are failing. 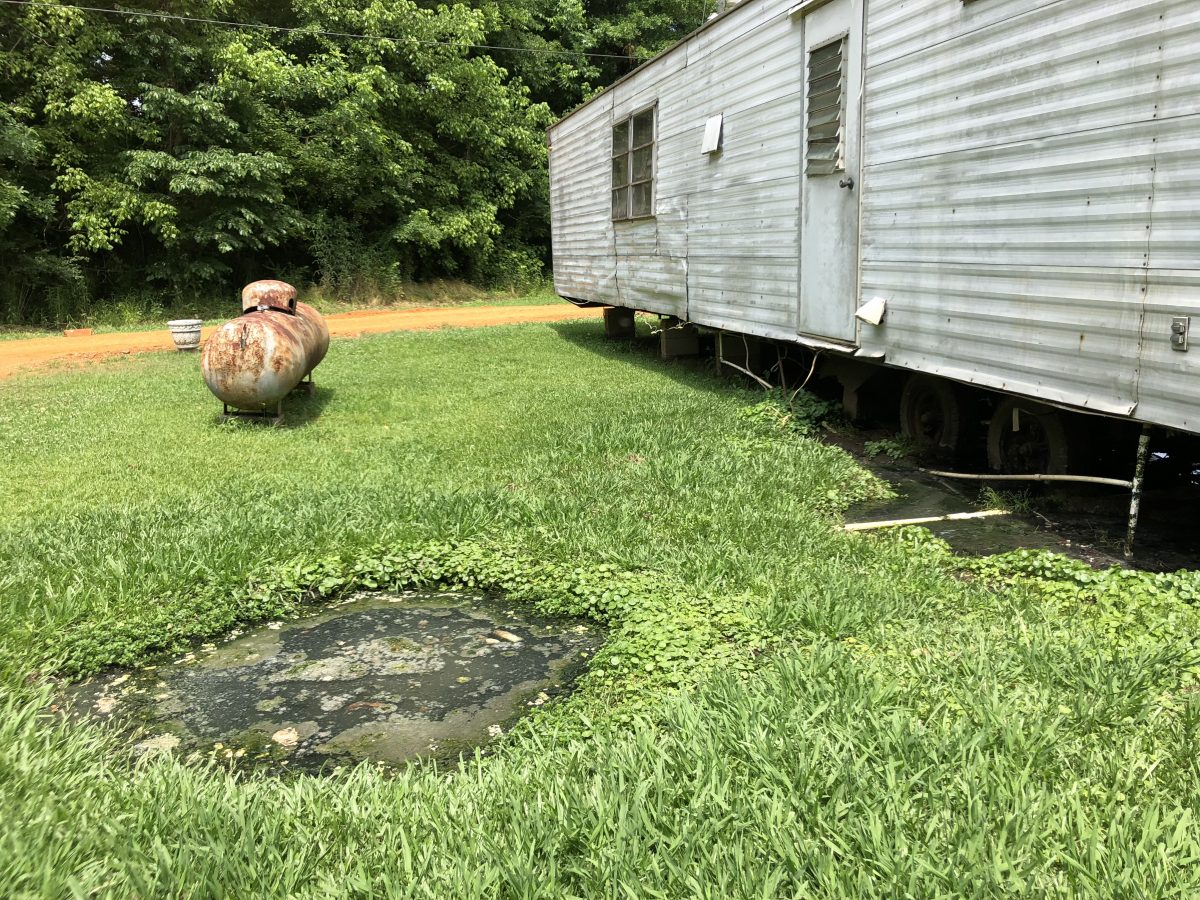 With ASCE, Barnett lobbies legislators to fund rural infrastructure improvements. President Trump said his $1.5 trillion infrastructure plan will fund these, but the 2019 infrastructure budget proposal only allots about $200 billion. A quarter of that will be released in block grants for unspecified rural programs all across the U.S. To replace each one of Alabama’s 200,000 failing septic systems would cost between $10,000 and $20,000. Alabama would need a grant for up to $4 billion, or about 8 percent of the federal budget. Other water infrastructure needs, like those of dozens of counties in Appalachia, could cost millions each.

“These aren’t inherently unsolvable problems—we’re not trying to send anyone to the moon,” Barnett said. “It’s just a matter of will and continued funding. We know how to design and we even have ones that work well in low permeability soils, but all of those things are expensive.”

According to Special Rapporteur Alston, infrastructure access has a massive impact on development and justice.

“Infrastructure enables people to live decent lives, and it also has great economic benefits,” Alston said. “They become more productive workers at a higher level, and the economy benefits from that as well.”

Less than a decade ago, Dr. Peter Hotez, founder of the National School of Tropical Medicine at Baylor College of Medicine, coined the term “neglected tropical diseases.” It refers to about 40 chronic and debilitating infections that occur in poverty-stricken places and also cause poverty due to long-term effects on productivity, child development, and pregnancy outcomes.

“I thought I knew what poverty looked like, but [the rural South] was a different animal with low-quality housing and environmental degradation,” Hotez said. “I thought there had to be tropical diseases here if you took the time to look. The problem was no one was willing to go into these poor areas to see if these diseases were here.”

He was right. His team discovered tropical diseases throughout southeastern Texas and Gulf Coast states like Alabama, Mississippi, and Louisiana. In Lowndes County, they found one third of 55 people tested positive for hookworm, a parasite spread through fecal matter in soil, and also found evidence of toxocariasis, spread through stray dogs and cats. In Houston and other places, researchers have seen cysticercosis, a tapeworm transmitted through human feces; murine typhus, a bacterial infection spread by fleas; Chagas disease, an infection that can lead to heart failure, spread through “kissing bugs” that live in lush vegetation; West Nile virus and Zika, spread through certain mosquito species.

The rates of these diseases are likely to be exacerbated by the effects of climate change. According to a 2017 study in Science, the American South stands to see the most economic losses from climate change. It predicts many counties will see 5 to 15 percent damages to their gross domestic product per year by the 2080s. More frequent extreme weather events like Hurricanes Harvey in Texas and Irma in Florida and Puerto Rico are hitting Southern coasts causing flooding and storm damage. A 2015 Climate Central study showed Alabama alone has thousands of vulnerable people and billions of dollars worth of property and infrastructure at risk of flooding.

Although Rush hasn’t yet been involved in a study, she suspects she and her children suffer from the conditions they’re living in. Her daughter has to be taken to Birmingham—three hours away—for sleep apnea treatments. Her 16-year-old son just graduated from middle school after being held back twice. Recent research shows that soil-transmitted parasites like hookworm can cause developmental delays in children.

In May, the Alabama Department of Public Health announced it is teaming up with local officials in Lowndes County to run a survey about sewage infrastructure and public health. But Rush and several other local residents said they’ve never heard from local officials about addressing the issue.

Cantrell McAlpine, a Lowndes County public service commissioner who has lived in a rural part of the county since 1982, said that the local health department does not remain in contact with residents, which has led to a lack of supervision over how septic systems are installed or maintained.

“It’s something that could be rectified, but we need a good active health department with proper follow-ups to help people understand what you have to do,” McAlpine said.

According to Kristie Gutierrez, a science education professor at Old Dominion University who led a study on climate justice in the rural Southeast, tackling environmental injustices like poor sewage infrastructure and public health crises must begin with an understanding of how climate change is discussed in the South.

“Rural communities are very individualist in that they know they need to work on taking care of themselves and not solely rely on the government to do things for them,” Gutierrez said. “Where types of meetings will take place, like churches or schools, getting people to come and enjoy conversation and community—that’s very important in rural regions and in the South.” 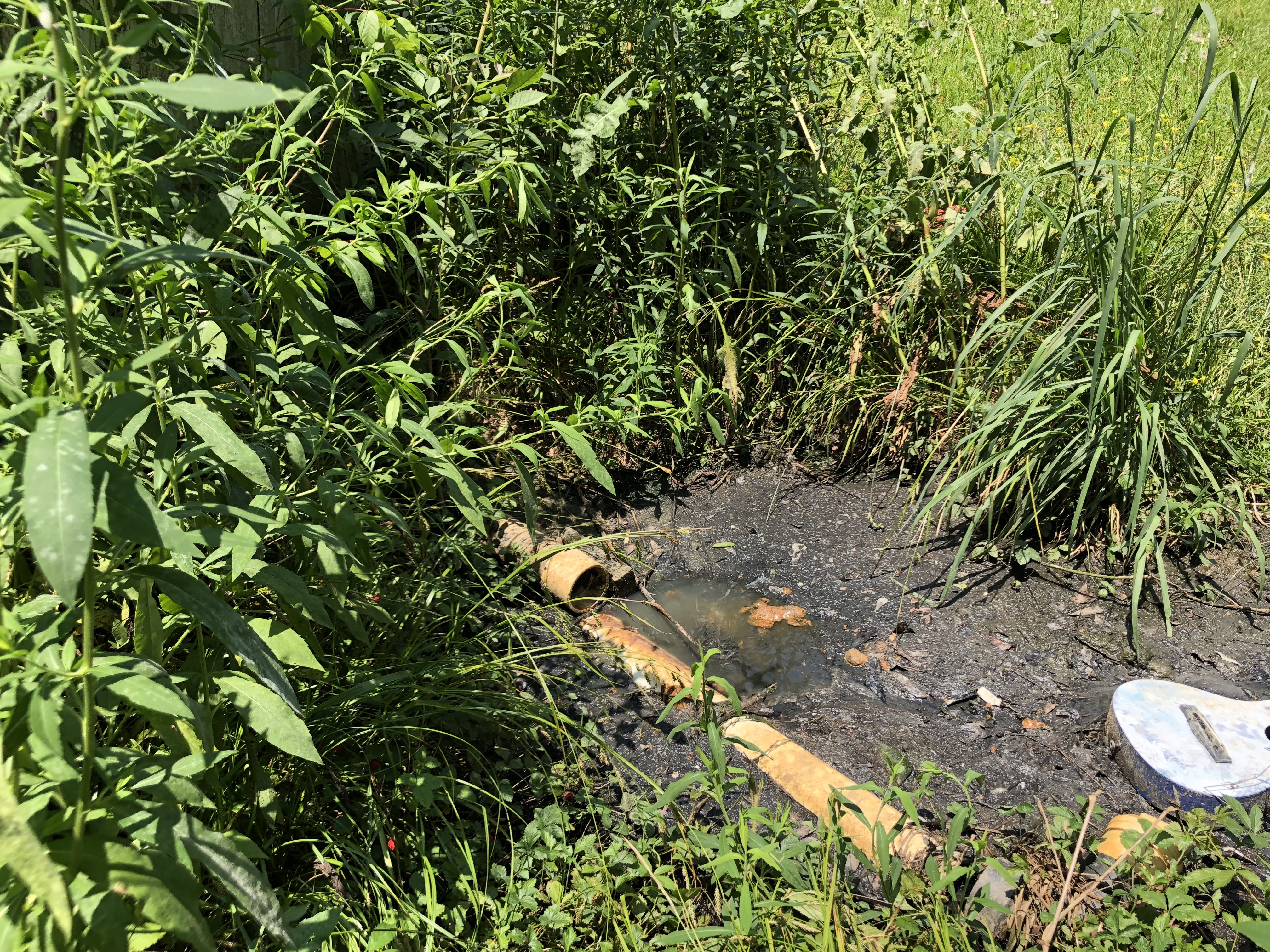 Wastewater from Pamela Rush’s house flows out into her yard through a process called “straight-piping.” The muddy area behind the mobile home is overgrown with weeds. Credit: Lyndsey Gilpin

With the local leadership of Catherine Flowers, who founded the Alabama Center for Rural Enterprise and works for the nonprofit Equal Justice Initiative, partnerships have formed between Duke University, Baylor College of Medicine, community groups and engineering experts to tackle technical and policy solutions to Alabama’s public health crisis and others like it across the South.

“We have collaborations on trying to find solutions,” Flowers said. “Some people say you’re excusing the government, they should be the ones doing it. But when they’re not doing it, what do we do? We can’t leave people to die, or to be sick.”

This year, National School of Tropical Medicine researchers will test 300 children in Lowndes County for hookworm. Researchers and engineers are also looking for more affordable ways to build septic systems, and holding more community events to spur conversations and ideas.

Rush hopes to play a small role in finding some sort of solution. By speaking out about straight-piping, she faces the possibility of being fined by the public health department, but she said she no longer has any choice. It’s the only way people will find out that she and her family live in these conditions. There are many others like them in remote places across the South.

“A long time ago, I was ashamed about it, and didn’t want anybody looking at this stuff,” Rush said, peeking through a frayed curtain over a cracked window to see her son. “But I had to come out of my shame. God gives me strength. I hope it will happen in my lifetime. It might.”

This series is supported by the Solutions Journalism Network, a nonprofit organization dedicated to reporting about responses to social problems.